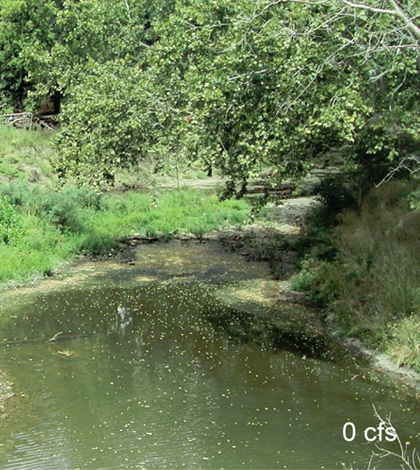 Of all the factors that influence a watershed’s health, intermittent streams might be the easiest to forget. After all, they do come and go without much warning — but it’s important to keep in mind that these ephemeral waterways do play important roles in regulating watershed hydrology, from supporting ecosystems to recharging aquifers.

A new study from the U.S. Geological Survey analyzed the effects of climate variability on intermittent streams, finding that streamflow regimes in these waterways closely reflects historical climate patterns. The results of the study are published online in River Research and Applications.

“A lot of literature is based on perennial streams; they’re widely monitored,” said Ken Eng, a research hydrologist with the USGS and lead author of the paper. “Streams that cease to flow during certain times of the year tend not to be studied as well. I thought it was about time to take a look at them, as many as I could.”

Eng and his co-authors studied streamflow data across 265 intermittent streams monitored by the USGS over the last 60 years. The researchers split the streams into five different types, each of which had at least a 40-year record of monitoring data and little influence from human sources. They looked at different factors contributing to periods of no flow, including precipitation, soil moisture conditions, snowmelt and evaporation.

Cedar Creek (shown in August 2013 and 2012, left to right) is a typical intermittent stream with flow rates changing drastically from year to year. (Credit: USGS)

Analysis revealed that while the duration of wet and dry periods contributed significantly to streamflow regimes, the intensity or volume of rainfall actually had little impact.

Over the relatively limited period examined by the study, the researchers failed to find any long-term changes in precipitation, and were unable to identify any major temporal trends in the streams’ behavior. Or, as Eng put it: “These streams haven’t changed very much over time.”

But then again, neither have precipitation patterns over the last six decades. However, the strong correlation between precipitation duration and streamflow regimes suggests that a changing climate could seriously affect the formation and flow of these streams in the future.

“If the climate projections are correct, we will see changes,” Eng said.

Aside from recharging aquifers, Eng said that intermittent streams help distribute organic matter and snowmelt, and provide a shallow habitat where fish can lay their eggs.

Eng plans to continue this research by examining flow regimes on a regional or national scale, and determining “how direct human modifications are impacting intermittent flows.”

“Trying to understand the natural variations of these intermittent streams is kind of the first step,” he said.