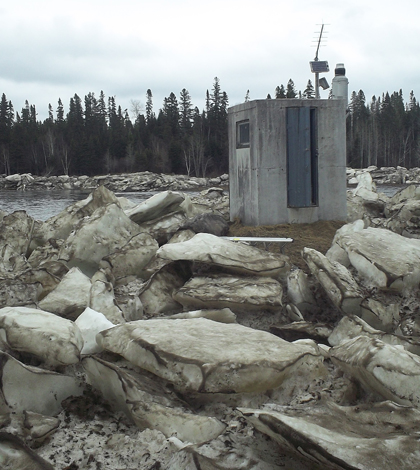 A stream gauge on the St. John River in Maine. (Credit: USGS)

There’s a new USGS network of monitoring stations to track the effects of climate change on New England’s hydrology. But while the network is new, it so far hasn’t required a single new sensor in the water.

Instead, the New England Hydrologic Climate-Response Network was born from an effort to single out the agency’s stations across the region that had the best data on the right variables from the right locations.

“It’s much more realistic to maintain the current networks with the climate angle in mind than it is to create an entirely new network, which doesn’t happen much these days,” said Glenn Hodgkins, a research hydrologist with the USGS New England Water Science Center.

It’s more than just a budget-friendly strategy. Some of the old stations have been operating for more than a century, providing the long-term records necessary for subtle changes in the climatic signal, according to Robert Lent, associate director of the science center.

“That’s critically important for us,” Lent said. “You can be the richest person in the world, but you can’t set up a network now that has 150 years of data.”

Having said that, the New England Water Science Center would still like to do more at those sites. They’ve proposed adding additional sensors at some sites, particularly for variables that are sensitive to climate change like water temperature.

“At those sites we want to make sure we’re collecting all the information we need to detect climate change,” Lent said.

“They’re critical changes, but they’re small and hard to detect,” Lent said. “And these long-term networks have allowed them to do that.” This stream gauge on the Piscataquis River in Maine, in operation since 1902, is part of the climate-response network. (Credit: USGS)

One of the longest-running records the office included in the network is its lake ice-out date, where the earliest data point was logged in 1807. Businesses, communities and even individual families had recorded the dates that ice leaves their lakes for centuries to let them know when transportation routes change, or even as a symbolic date to celebrate the end of winter.

Hodgkins analyzed a collection of those amatuer records and found that the data was reliable and accurate. Five lakes have records from the mid-1800s to the early 2000s, and ice-out dates have advanced earlier in the spring at each of them.

An important of creating the framework for the network was dividing New England into 14 climate response regions where hydrologic variables tend to follow similar trends. That help make sure than researchers comparing data between two sites in one region know that geographic differences shouldn’t complicate things.

“If you want to compare a groundwater site to a surface water site, if you stay within those regions, you can be generally confident that you’re looking at similar climatic conditions,” Lent said.

By selecting monitoring stations for the New England Hydrologic Climate-Response Network, the USGS has made it easier for other researchers to find sites with long-term records that are best suited for detecting the effects of climate change. Perhaps just as importantly, they’ve given those sites an extra level of protection from the sorts of budget cuts that have forced the agency to shut down monitoring sites in the past.

“It’s a responsibility of ours to make sure we understand what is our most important data and make sure we maintain this if at all possible,” Lent said. “We will do everything we can to protect these sites. Once they’re gone, you can’t replace the data.