USGS Study Finds Neonicotinoids In Over Half Of Sampled U.S. Streams 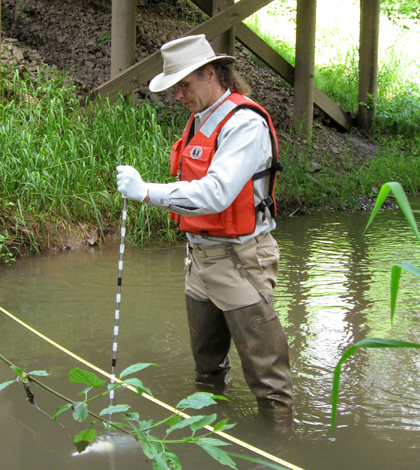 A USGS scientist samples a stream for neonicotinoid concentrations as part of the first national-scale investigation of these insecticides. (Credit: Hank Johnson / USGS)

A new study from the U.S. Geological Survey has found concentrations of a controversial class of insecticides in more than half the streams sampled in the U.S.

The study, which is the first national-scale investigation of neonicotinoid insecticides, resulted in a paper published online in Environmental Chemistry. Neonicotinoids are a class of insecticides similar in chemical structure to nicotine, and are widely used to coat the seeds of corn and soybean crops as a means of keeping predatory pests away.

Michelle Hladik, USGS research chemist and lead author of the paper, said that she was part of a research group responsible for monitoring trends in the usage of certain insecticide chemicals and determining how they might impact the environment.

“The neonicotinoids have been receiving a lot of attention lately, but we also have been noticing that their use has been increasing,” Hladik said.

Several years back, Hladik developed a method to measure concentrations of neonicotinoid compounds in surface waters. That method would be used to sample waterways throughout the U.S. and Puerto Rico between 2011 and 2014, providing a wealth of data on which the recent study was based.

Earlier studies had documented the presence of neonicotinoids in the Midwest, but the recent research revealed that the compounds occur in waterways all over the country. Furthermore, the new study showed that neonicotinoid concentrations are present in low levels throughout the year in both agricultural and urban streams. Neonicotinoids are one of the major suspects for those looking into the disappearance of bees. (Credit: Bjorn Appel/CC BY 3.0)

Hladik said the data will provide a foundation for further research examining the impact of these chemicals on aquatic organisms including fish and invertebrates, as well as on terrestrial organisms — specifically pollinating bees, whose disappearances are being blamed on insecticide use by some scientists.

Neonicotinoids aren’t believed to be human carcinogens, and none of the sampled waterways featured concentrations that exceeded the U.S. Environmental Protection Agency’s aquatic life criteria. Still, the continual presence of low concentrations in more than half of U.S. streams indicates a need for a closer look, Hladik said.

“There are some other researchers who feel that the levels the EPA has set may not be protective enough,” she said. “We’re still continuing to gather surface water concentrations. A lot of these sites were just a one-time sampling. We’d like to fill in more information as far as how these concentrations change over time.”

In addition to surveying surface water for the compounds, Hladik said her team will also examine concentrations of neonicotinoids in groundwater sources. She’ll also be studying the effects of pesticide exposure to native bees. Most existing research on bee disappearance has focused on honeybees of European origin.

“We’re trying to fill in information that may not be out there about where these compounds come from and go to,” Hladik said.

Top image: A USGS scientist samples a stream for neonicotinoid concentrations as part of the first national-scale investigation of these insecticides. (Credit: Hank Johnson / USGS)