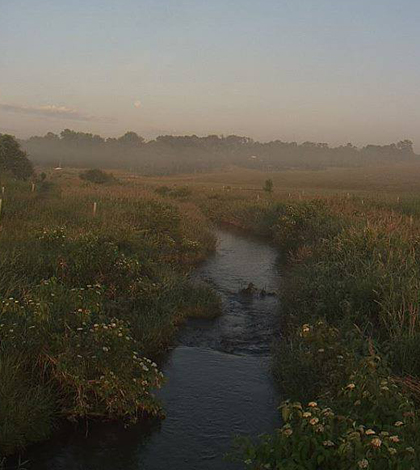 When it comes to water quality problems brought on by watershed land-use patterns, Virginia’s Stroubles Creek has it all backwards.

The town of Blacksburg and the Virginia Tech campus dominate the creek’s upper watershed, bringing on water quality problems associated with urbanization that have landed the creek on the state’s list of impaired waters. But downstream of campus, the watershed turns to forest and the stream “fixes itself,” according to W. Cully Hession, a professor of biological systems engineering at Virginia Tech.

“In most watersheds you’d think that up in the headwaters you’d have forest, and then down in the middle you might have urban land,” Hession said. “So it’s kind of flipped over.”

Between the city and the forest, the creek flows through a tract of former farm land that the university operates as the Stream Research, Education and Management, or StREAM Lab. The facility supports faculty research and has hosted components of 16 courses. It’s also the basis for a National Science Foundation Research Experience for Undergraduates, a program that brings a handful of students to campus each summer to tackle watershed issues from social and physical science perspectives.

The lab property is a former farm that was donated to the Virginia Tech Foundation, which leases it to the university. This section of the creek–with a history of agricultural operations tight to its banks along with sediment and flow issues brought on by urban development upstream–wasn’t in great shape when the lab opened.

“It had cattle in it for 200 years, so it was a pretty messed up stream,” Hession said. “The banks were naked, there was no vegetation, it was highly erodible.”

With grant money from the state, Hession embarked on a series of restoration projects along with Tess Thompson, associate professor of biological systems engineering . They divided the creek into three segment, each getting a progressively more intensive set of restoration treatments. Monitoring stations, which consist of a sampling bridge and a YSI sonde measuring temperature, conductivity, turbidity, pH and dissolved oxygen every five minutes, were installed at the downstream end of each segment. The first section’s treatment was simply the removal of cows from the landscape. The next section downstream had its banks reshaped to a slope and replanted with vegetation. The third and final section got the most ambitious hydraulic overhaul.

“We’re engineers, so we did calculations for how we wanted the stream to look based on sediment transport,” Hession said. “We built in-set floodplains so when we get the high urban flows it has a place to release itself and lower the velocities so it doesn’t move as much sediment.”

Hession said the benefits from the restoration are hard to discern in their monitoring data because the sediment loads from upstream are so bad that they overwhelm any signal that might have resulted from local changes. Surveys, on the other hand, have shown that bank stabilization efforts are working. A bank that had retreated more than a meter over two years before it was sloped now seems to be staying in place.

Even without the water quality data to back it up, Hession said the creek is clearly better off now. The lab’s equipment and operations have been funded by a suite of grants from the National Science Foundation’s Engineering Education and Centers, Virginia Tech College of Agriculture and Life Sciences, and the university’s Institute for Critical Technology and Applied Science. Hession and collaborators from numerous disciplines have used the grounds to study interactions between surface and groundwater, floodplain nutrient uptake, greenhouse gas emissions, sediment fate and transport, and antibiotic resistance gene persistence and transport, to name a few.

These studies use novel techniques such as simulated floods formed by pumping water out of the stream and onto the flood plain. This comes close to replicating a natural flood under relatively controlled conditions.

Much of the data are updated online hourly for use by researchers, educators, and the interested public.