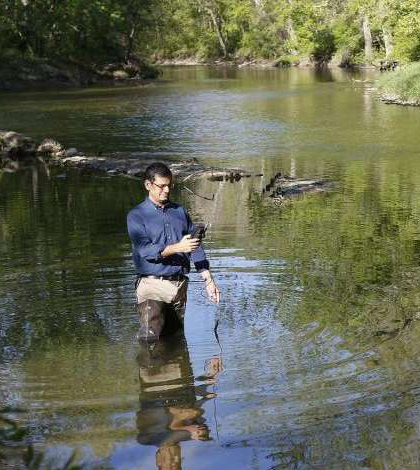 Citizen scientists can do good work when they’re well trained. A new study has added more proof of this concept, as well as finding the general usefulness of data gathered by lay researchers, using the Wabash Sampling Blitz as a test case.

The sampling blitz is a water quality monitoring program overseen by the Wabash River Enhancement Corporation, a nonprofit agency that leads efforts to improve the river and its tributaries. It got its start in 2009 when the agency partnered with scientists at Purdue University to recruit, train and deploy community volunteers in a large-scale, simultaneous data collection effort.

Twice a year, hundreds of volunteers participate in the sampling blitz. Over four hours, they collect water samples from 206 sites within the Great Bend region of the Wabash River Watershed. The majority of the land drains to the Wabash River and is used for row crop agriculture. It’s also home to the urban areas of West Lafayette and Lafayette, Ind.

Volunteers assess the samples for temperature, pH, turbidity, nutrient levels and pathogens. That provides a lot of data for local watershed managers, but there has always been a question of data quality — Can scientists use the measurements gathered by volunteers with any confidence?

Researchers at Purdue recently put that question to the test in a study to determine how data collected by citizen scientists on nitrates and orthophosphates stack up to more precise measurements taken by trained scientists. The results are promising. This graphic shows location and land use of the Great Bend of the Wabash River Watershed from the 2001 U.S. Geological Survey Land Cover Dataset. (Credit: Muenich et al.)

Volunteers in the blitz go out to predetermined locations and gather water samples. A portion of those are sent to a lab for analysis while some are tested on site using field test strips. To gauge how well the citizen scientists performed the test strip methods, Purdue investigators compared the data gleaned from lab results to the ranges of interpretations volunteers gave of test strip measurements.

For data on nitrates, investigators found that the interpretations were not spot on when compared to lab measurements. But, in general, they were precise enough to still prove useful. So by using volunteer data, scientists may be able to gauge if nitrate levels are going up or down but not by how much.

The findings on orthophosphate measurements were a little spottier, however. Researchers believe that the result may have come because of relatively low levels of orthophosphates in rivers generally. The test strips used are really only meant to measure high levels, so they missed the concentrations that were there.

Purdue investigators say that the results of the work show that data collected by citizen scientists can prove meaningful and highly useful for watershed groups like the Wabash River Enhancement Corporation. For the Wabash Sampling Blitz, their data may help to reveal where hot spots in the watershed could need more attention and effort.

In addition, the sampling blitz helps to communicate some of the science going on to the broader community around the watershed. It helps the public understand the link between what happens in the landscape and how it affects local waterways.

Full results of the investigation are published under open-access license in the journal Citizen Science: Theory and Practice.