Walleye Stocks In Wisconsin Lakes Going Down With Warming 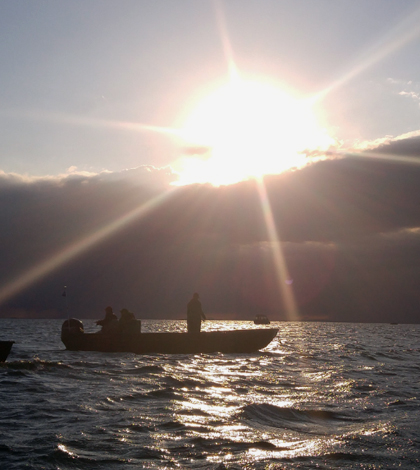 Lakes in Wisconsin have gotten warmer over the past 30 years, according to the U.S. Geological Survey. As a result, walleye populations in many of the state’s lakes are declining while largemouth bass numbers are going up.

Because of this shift, there is some concern for walleye stocks across the state. In a recently completed investigation, researchers led by scientists at the Wisconsin Department of Natural Resources have modeled what the future could hold for walleye stocks there.

There appears to be little concern of walleyes outright disappearing, but the lakes under study — more than 2,000 of them — are going to see some shifts in the future. To gauge what those might be, investigators used modeling tools to bring together data sets on temperatures and fish stocks.

Simulations were run under two climate change scenarios based on estimated atmospheric greenhouse gas concentrations in the future. One was more extreme, guessing high emissions, while the other considered a lower rise in greenhouse gases.

Even under the lesser extreme, simulations showed that air temperatures are likely to go up more than 2.5 degrees Fahrenheit by century’s end. The implications for Wisconsin lakes and their stocks of walleye aren’t good.

Growing degree days, a measure of cumulative temperature over a lake from ice-out to ice-on, were predicted to increase. But the magnitude varied among lakes, time periods and circulation models.

Scientists predict that there will be a loss in walleye recruitment in 33 to 75 percent of Wisconsin lakes where recruitment is currently supported. The flipside of that decrease is a predicted surge in the number of lakes that support higher largemouth bass populations, with anywhere from a 27 to 60 percent increase.

And the percentage of lakes capable of supporting abundant largemouth bass but failed walleye recruitment was predicted to go up from 58 percent in present-day conditions to 86 percent by mid-century, based on median projections across global circulation models. That number goes up to 91 percent by century’s end.

“Conversely, the percentage of lakes with successful walleye recruitment and low largemouth bass abundance was predicted to decline from 9 percent of lakes in contemporary conditions to only 1 percent of lakes in both future periods,” researchers write in the journal Global Change Biology.

But since conditions in and around lakes can vary, there will still be lakes in Wisconsin with walleye stocks. Especially in large lakes, walleyes are likely to reproduce successfully despite warmer temperatures. And scientists were able to identify 85 water bodies where continued support for natural walleye recruitment is probably going to exist.

For those large lakes, which are more resilient to climate change than others, researchers urge protecting them from stressors that could hinder the remaining walleye fisheries, such as loss of habitat and overfishing. In other lakes, where natural walleye reproduction will likely not be possible, scientists note that walleye populations could still be maintained through stocking programs.

An interactive map for viewing current and future predictions of walleye and largemouth bass stocks in Wisconsin lakes is available online. All data from the investigation are posted to the U.S. Geological Survey’s ScienceBase-Catalog.