‘Warm blob’ in Pacific not to blame for wacky weather, may yet provide insight into climate change 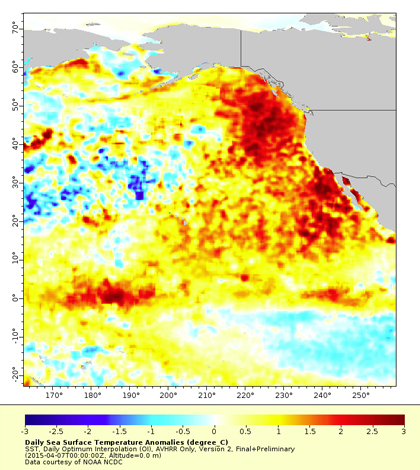 It’s not a direct byproduct of global warming or an explanation for California’s drought. Nor is it, despite the name, a ‘50s B-movie monster. The mass of unusually warm water floating off the coast of California, known now as the “warm blob,” is a strange phenomenon indeed, and while it doesn’t hold all the answers to the weird weather witnessed across the U.S. over the past year, it might offer a useful glimpse into the relationship between the ocean and atmosphere.

“We know the atmosphere and ocean interact. Now we can document in this one extreme case how that worked, and that’s a step forward,” said Nick Bond, research meteorologist at the University of Washington and climatologist for the state.

Bond is the researcher who first identified the odd patch of warm water as it appeared in the Pacific northwest during a period of “very unusual weather patterns.” He also coined the term “warm blob” in his monthly newsletter as Washington’s state climatologist. Early in 2014, Bond began initial analysis into the mechanisms behind the warm patch, the results of which were published in a paper appearing in Geophysical Research Letters.

Drawing from oceanic and atmospheric datasets with a focus on the winter of 2013-2014, Bond found that “weird winds” in the Pacific during that period altered currents and brought more warm water in from the south than usual. Those winds, Bond said, can be linked to events in the far western tropical Pacific, and should be regarded as a climatological fluke rather than something more sinister.

“It wasn’t global warming that caused the blob,” Bond said. “But the warming that did occur is kind of what we’re expecting to see in future decades. Conceivably, we can see how the [marine] ecosystem responds to warming. We can use recent events to ‘go to school’ and figure out those kinds of relationships.” A glimpse of the blob in April 2014, published in the July 2014 newsletter in which Bond coined its name. (Credit: NOAA)

Bond noted that some recent articles over his work implied the blob caused dry weather on the West Coast. Others said the blob was to blame for snowy, frigid winters in the East. While Bond says those claims aren’t accurate, there may be some linkage between the warm patch of water and air temperatures a few hundred miles inland.

Air around the blob is humidified and warmed, Bond explained. When prevailing winds blow across this region, they carry the warmed air inland along the Pacific coast. “It’s not a huge effect,” Bond said, but it could account for some additional warmth in certain areas.

“What [the blob] has morphed into this year does have a secondary effect,” Bond said, referring to warmer temperatures along the coast. “The relationship isn’t one to one, but there’s definitely a relationship there.”

“It’s not something that extends to Kansas City, or something like that.”

Defining the exact relationship between the blob and inland temperatures is near impossible, Bond said, as the randomness of weather patterns and myriad other climate factors complicate the equation. But the blob does present a unique opportunity for research into the impacts of warming oceans on the marine ecosystem.

“We know that a lot of the organisms there are sensitive to ocean temperatures up and down the food chain,” Bond said. “It’s almost an opportunity to learn how the sensitivities of that system respond to these kinds of effects.” Bond says he’ll be exploring this topic, as well as the “winners and losers” of warming oceans, in a workshop next month in San Diego.