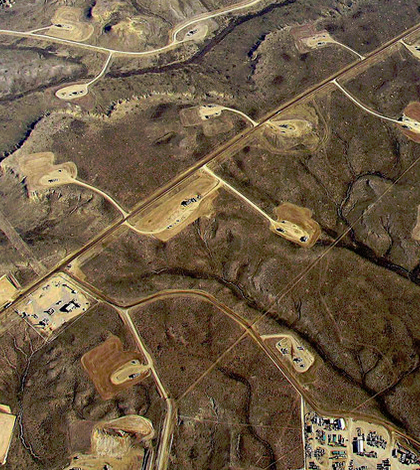 While these earthquakes were large enough to be felt, they rarely caused damage. But such a considerable increase in the frequency of seismic events raised concerns beyond the quakes’ immediate impact. USGS researchers found that the increased seismicity in the eastern and central U.S. coincided with activity at wastewater injection wells throughout the country, including sites in Colorado, Texas, Arkansas and Ohio.

It’s important to note from the start that these quakes have not been linked to hydraulic fracturing, or “fracking,” the drilling process that uses pressurized water and chemicals to crack rock for gas and oil acquisition. However, the slurry of fluids used in fracking must be disposed in a manner that prevents freshwater contamination. That’s where the deep wastewater injection wells come in: Buried thousands of feet underground and shielded by layers of concrete, each disposal well may contain wastewater from several drilling wells. A drilling rig and pipes on a six-well pad in Colorado. (Credit: Tim Hurst/CC BY 2.0)

When wastewater is pumped into disposal wells near seismic faults, the faults can slip, causing earthquakes. This can even occur along older, more stable faults, such as the one near Youngstown, Ohio. When a quake — initially reported as magnitude 2.7 but eventually raised to 4 — occurred there on Christmas Eve in 2011, the state asked nearby drilling operations to cease until scientists could analyze seismic data from the event. The state eventually acknowledged the connection between wastewater injection and the earthquake. The Ohio Department of Natural Resources now requires gas and oil companies seeking drilling permits within three miles of a fault line to install a seismic monitoring network before operations begin

When wastewater injection is responsible for seismic activity, the quake’s intensity is directly related to the volume of fluid being stored in the well, according to a study by USGS scientist Art McGarr. This means that, as hydraulic fracturing becomes more prevalent in the U.S., and disposal wells are filled to greater capacities, we can expect stronger earthquakes in regions not accustomed to such events. The USGS and other agencies are exploring methods to mitigate the effects of injection-induced seismicity at home, though Canada, China and the UK are also being examined as oil and gas production increases abroad.