Watchful Eyes on One of Maine’s Crown Jewels: Jordan Pond 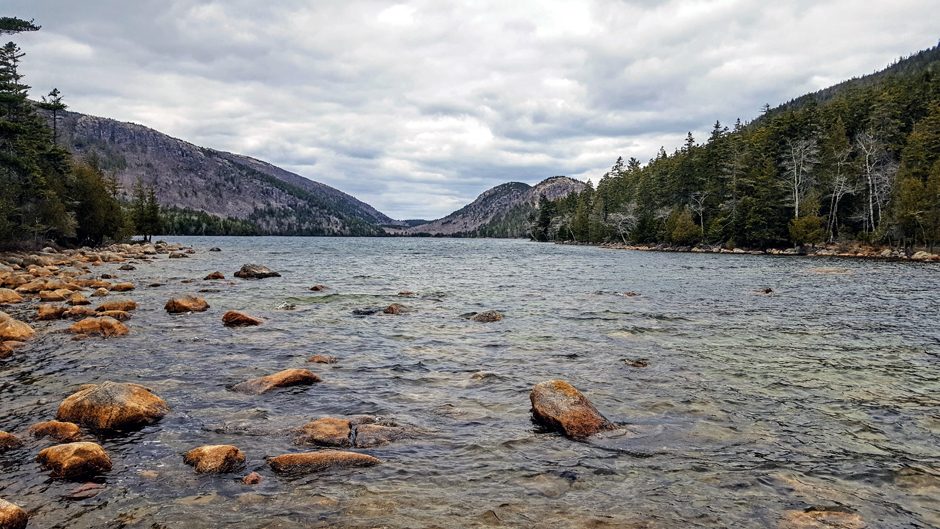 Formed by a glacier, Jordan Pond is among Maine’s clearest, most beautiful bodies of water. It’s also a critical freshwater resource, and watchful eyes are protecting it.

EM spoke with Dr. Rachel Fowler, Friends of Acadia’s aquatic scientist, about her work monitoring Jordan Pond. A postdoctoral research scientist at the University of Maine, she is a member of a partnership among the National Park Service, the University of Maine Climate Change Institute, and Friends of Acadia that began deploying the Jordan Pond buoy in 2013. Canon provided the initial support for the project.

Friends of Acadia is a nonprofit organization that supports different projects in the park. Bill Gawley and Shannon Wiggin of the Acadia National Park Air and Water Quality Monitoring Program support the project from the National Park Service side of the collaborative, and Dr. Jasmine Saros is a professor of aquatic ecology at the University of Maine who studies how lakes respond to environmental change over time. As part of her post-doctoral work, Dr. Fowler works with the Jordan Pond buoy and its data.

“I started working on this project in 2016 while I was a PhD student at the University of Maine,” explains Dr. Fowler. “My interests lie at the intersection of natural and human systems and how they respond and adapt to environmental change and climate change. I specifically study lake ecology and carbon cycling and how they are affected by climate change. Acadia National Park is the perfect place to work because there is a strong connection of people to the landscape, which includes lots of lakes.” 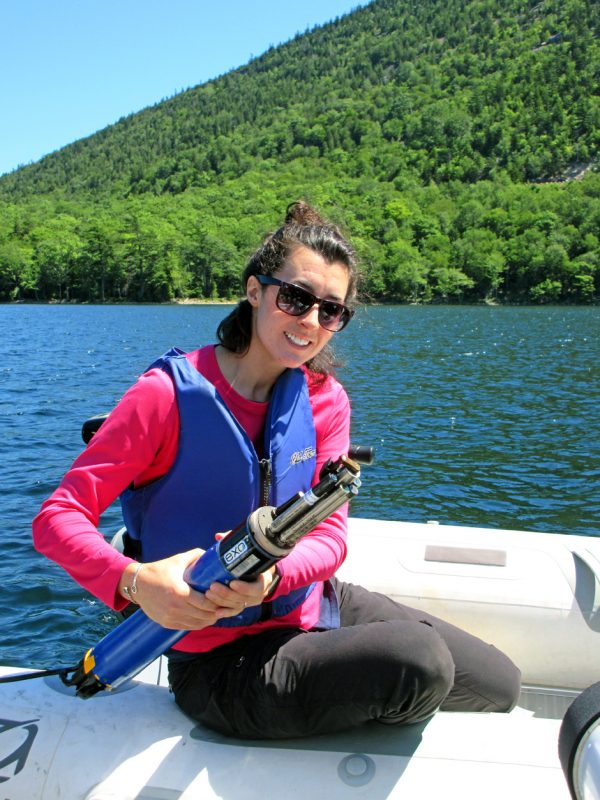 “In this position I help deploy the buoy in the spring, facilitate its data collection throughout the entire ice-free season, work with the team to pack up the buoy in the fall, and then I do what I’m working on right now: analyzing the data and trends that we saw over this season,” details Dr. Fowler. “Also, now that we have seven seasons of data, we’re doing some year-to-year comparisons.”

It’s a lot of data to slog through.

“It’s a massive data set because we have over 30 parameters that get measured every 15 minutes,” remarks Dr. Fowler. “We have thousands of sampling events throughout the season, compared to pre-buoy monitoring, when the lake was sampled once a month from May to October. We’re talking 16,000 sampling events as opposed to six, so the buoy data really help us fill in the gaps about what’s going on in the lake.”

Filling in the gaps with data

Among the trends that the team was most interested in monitoring were changing water clarity and dissolved organic matter (DOM) in the water.

“Since the 1980s, the National Park Service (NPS) staff has been sampling Jordan Pond and other lakes in Acadia National Park monthly during the open water season, monitoring parameters like water clarity and DOM,” Dr. Fowler describes. “From 1995 to 2010, they found that water clarity was actually declining a bit in the lakes while DOM was going up. When the data revealed that lakes in the Park were not quite as clear as they had been in the past, we wanted to know what was going on.”

Jordan Pond, a crown jewel of Acadia National Park, is often described as the clearest lake in Maine, so it is a well-suited study site for changes in water clarity and DOM. It’s an important tourist draw, and numerous people recreate on the lake. It’s also a municipal drinking water source.

“It’s not necessarily a bad thing that the water is a little less clear than it used to be, because it may signify a return to pre-acidification conditions, a recovery that happened because of the Clean Air Act Amendments of 1990,” states Dr. Fowler. “Because of this successful piece of legislation, there’s less acidic atmospheric deposition, and that lowers the ionic strength of soils in the watershed. The soil can more readily give up the DOM that it holds, and it gets washed into the lake, making it a little less clear. That’s a piece of what we think may be going on.” 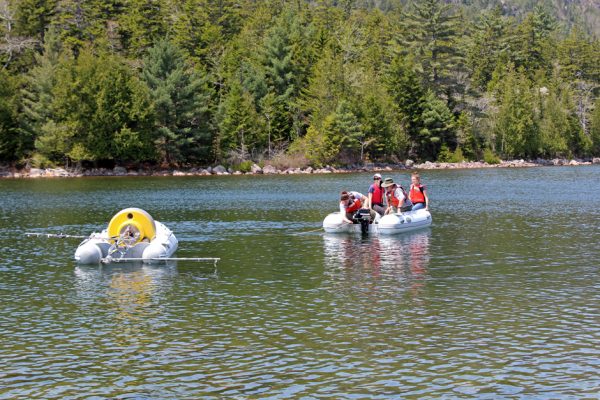 “We think that climate is playing a role in what’s going on in the lake because, after 2010, that trend in water clarity decline wasn’t as well-defined,” says Dr. Fowler. “In fact, water clarity has been more variable since 2010. We think that’s because the lake has recovered from acidification, and the changes that we’re seeing now in DOM and water clarity are related to changes in climate, particularly more severe precipitation events.”

The team has the buoy paired with a weather station on the Jordan Pond House, a restaurant located at the southern end of the lake. The weather station tells them about rainfall amounts, air temperature, wind conditions, and related parameters.

“It’s really helpful for us to have them working together,” comments Dr. Fowler. “We can look to episodic events, such as precipitation events, and we can see how those impact parameters like DOM and water clarity in the lake.”

The difference in data resolution now that the buoy is in place is striking—and it opens up many new opportunities for the team.

“In previous years, before the buoy, when the National Park Service staff sampled the lake once a month, we might not have had any idea how a big storm could affect water quality in Jordan Pond, and on what timescale. Now, sensors on the buoy are continuously recording water quality data during and after the storm,” explains Dr. Fowler. “The buoy is helping us to learn more about the effects of precipitation on the lake, which is useful because precipitation events in Maine are getting more severe and they’re expected to continue doing so in the future.”

It’s a complicated research problem to crack because there’s really no way to predict exactly how climate change will affect one particular lake system. Although there are trends, each lake is unique.

Fortunately, there is a tremendous amount of local buy-in behind taking action to preserve the resource that Jordan Pond is to the region.

“I wouldn’t say people are worried about water quality in Jordan Pond, but we do have many people asking about it, and we are trying our best to do outreach and inform as many people as possible,” explains Dr. Fowler. “We have an interactive digital display at the Jordan Pond House to explain the purpose of the buoy in the lake and to share water quality findings. Sixty percent of Park visitors come to see Jordan Pond, and we want to ensure that they keep appreciating its aesthetic beauty.”

Of course, the team also watches parameters involved in sustaining Jordan Pond’s excellent water quality. This is critical for the local municipalities that use the water for drinking.

“Another great thing about the buoy is that the sampling intervals are so frequent,” adds Dr. Fowler. “If something unusual were to show up in the data, we could immediately flag it and either go out on the water and take samples, do an experiment, or work with Park staff to perform some kind of management action. We can respond very quickly now.”

In addition to high-resolution monitoring, Jordan Pond is “doubly protected” from threats by point-source pollution—and this is also partly why the changes to the water have, thus far, mostly been benign. 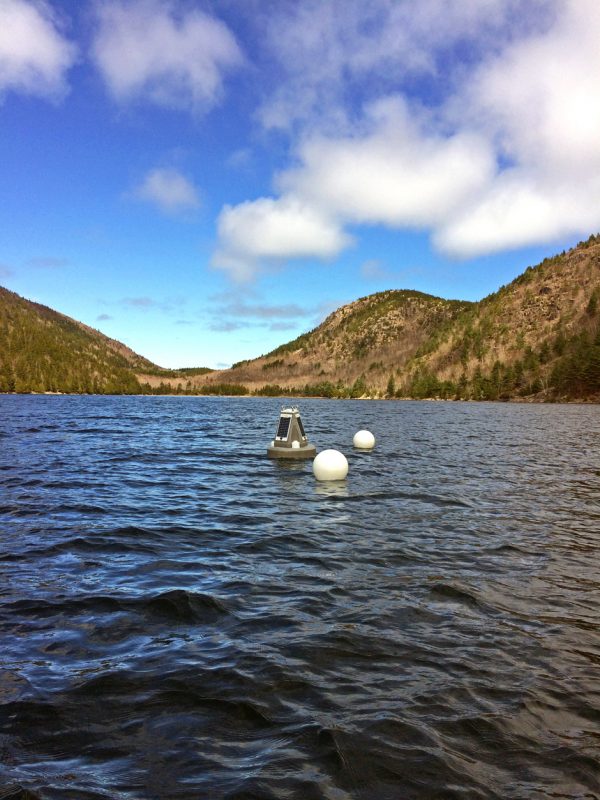 A scenic view of the buoy after deployment. (Credit: Nora Theodore)

“Its entire watershed is within the Acadia National Park boundary, and it’s also a drinking water source, so people can go out and kayak on the lake but there’s no skin contact allowed,” remarks Dr. Fowler. “It’s very well protected, so instead of threats from local pollutants, we are more concerned about bigger picture threats from climate change and atmospheric deposition.”

Having just finished their seventh year, the team is excited to get close to a decade of high-resolution data they can compare with past years of park data.

The researchers hope to learn more about these types of changes year-to-year and what that means for the ecology of the lake.

“Importantly for our project, Acadia National Park has a decades-long legacy of water quality monitoring. Previous monitoring consisted of monthly snapshots,” remarks Dr. Fowler. “Now we have high-resolution data that can enhance these snapshots and fill in all the blanks, and we’d like to continue to expand the project. Jordan Pond is the lowest-nutrient, clearest lake in Acadia National Park, but there are many different types of lakes in the Park. We’re interested in putting sensor instrumentation in lakes that might not be as clear or low-nutrient as Jordan Pond to get a better idea of how the range of lakes in Acadia National Park might be responding to environmental change.”

The team is also exploring ways to monitor what’s happening in the park when the lakes are iced over.

“We have data from the buoy in Jordan Pond from May through November, but we don’t have a very solid idea about what’s going on in the wintertime,” Dr. Fowler adds. “Last year we put out some exploratory instrumentation in the winter, including temperature and light sensors, and this year we’d like to expand on that. This will give us an idea of what’s going on under the ice, and how that might affect water conditions going into the spring season.”