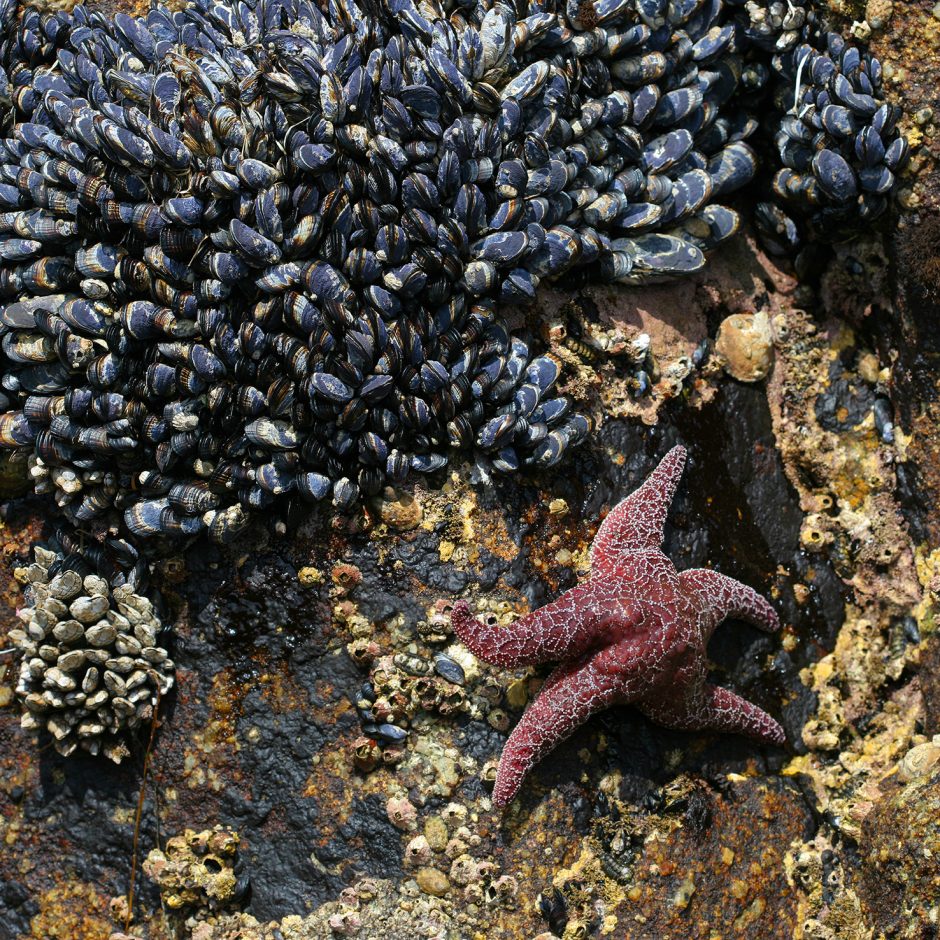 The colonization of a solid substrate in the intertidal zone by the Californian mussel (Mytilus californianus) as well as barnacles and a sea star. (Credit: Larry J. Friesen)

Marine fouling species may seem to be lowly creatures, situated toward the bottom of that portion of the food chain animals comprise. However, these filter-feeding invertebrates that make their homes on hard underwater substrates such as the hulls of ships are among some of the most successful invasive species. Their secret is simply their ability to latch onto human vehicles and survive.

Now, new research on the fouling community in the San Francisco Bay indicates that a single wet winter and the change in salinity that high levels of precipitation bring can knock back the advance of these hearty creatures. Marine biologist Andrew Chang of the Smithsonian Environmental Research Center’s Tiburon, California branch published this new research in December of 2017.

Despite their off-putting name, the estuarine and marine organisms that fall under the heading of fouling species are fascinating. “They can be beautiful, especially under a microscope—colorful, and a dazzling variety of shapes and forms unlike anything we see on land,” describes Chang. “So as a biologist, that’s inspiring and interesting.”

However, it was the variation in the community in the same locations year by year that really prompted this research.

“Over time, we noticed that even if we visited the same geographical location at the same time of year, we would see very different communities from year to year,” clarified Chang. “This was puzzling and intriguing. As ecologists, we want to understand the mechanisms driving nature: what creates the patterns of life that we see? So understanding these patterns in nature, and trying to see how we’ve modified those patterns via invasions, were two of our underlying motivators.”

The team set out to monitor this community in the San Francisco Bay. Although the basic tools are simple, standardization is important to ensure valid comparisons can be made across times and locations. For example, the surfaces for attaching and monitoring must have the same texture, composition, orientation, and exposure to light to produce valid results.

“We use 14cm square plastic panels, attached to a brick for weight, and suspended by a rope from a dock at a depth of 1m,” details Chang. “The panel faces down, toward the bottom, and that’s the surface on which the larvae of fouling organisms will settle. Invertebrates tend to settle on the undersides of hard surfaces, while the upper, more light-exposed surfaces tend to grow a lot of algae. We wanted invertebrates, so we focus on the downward-facing side.” Ciona robusta, one of San Francisco’s most dominant invaders, needs salty water to thrive, and its numbers dwindled when a single wet winter sent freshwater streaming into the bay. (Credit: Melissa Frey/Royal BC Museum)

The next task was simply to select locations for deploying the panels. The team used stratified random sampling to choose the sites, ensuring that each zone within the larger area would be observed while avoiding bias.

“We’ll deploy the panels and leave them in the water for some length of time—often 3 months, during the summer, when most species are reproducing, and when growth is highest,” Chang explains. “In this study, we deployed panels for several different lengths of time to capture the effect of different processes that act on the community, from initial settlement of larvae, to settlement/growth, to a mature community, to long-term. We also replicated the physical environmental conditions we saw in the field using a lab experiment in which we exposed communities on panels to several different simulated winter conditions (dry, moderate, and wet).”

Climate change is making extreme weather patterns more common, including the drought/deluge pattern that is throwing off various organisms in the San Francisco Bay. However, it’s much tougher to determine what the effects of climate change more generally are on an entire ecosystem than it is to determine how a single species is affected.

Since many of these creatures within the fouling community need a saltier environment to survive, they thrive during drought conditions and follow their habitat areas as they expand when saltier waters move upstream. This along with their important foundational role as a food source in the ecosystem makes them an important type of species to study.

Dr. Chang and the team found that during dry years, an invasive species of tunicate, Ciona robusta, thrived in the Bay. However, Ciona and similar species declined during the wetter winters of 2006 and 2011, as massive influxes of freshwater prompted other members of the fouling community to take over. The team then confirmed that it was the fresh water from the rainy weather that caused the change by exposing panels to fresher water in the lab; the “wet year” panels experienced near total mortality.

Chang describes this process as a sort of “reset” to the system caused by the freshwater years—one that can aid novel invaders in the area that can thrive after a wet year has eliminated most of the competition. However, these wet year reboot cycles are not solely advantageous for invasive species.

“The process is advantageous for whatever species might be able to take advantage of the opportunity provided by the die-off of the previous community: more available resources (space and food),” clarifies Dr. Chang. “Some invaders are able to do that, and some native species as well.” One of the most important takeaways from this work is its focus on the effects of extreme weather on entire ecosystems.

“Most work so far has focused on one or a few species, and on changes to average conditions such as an increase in temperature of 1 to 2 degrees C rather than the effect of extreme conditions generally,” states Dr. Chang. “This is simply because those are the easiest things to do. It’s much more challenging to work out processes affecting an entire community—yet those are crucial to understanding the effect of climate on the system and the larger-scale relationships involved.”

Furthermore, the researchers hope that local water managers will be able to use their results to better assist native species.

“If you know how the system responds to shifts in environmental conditions, and you know there are certain times, like after a wet winter, where much of the previous community is cleared away, that could be a good time to try some management or restoration actions, such as enhancing populations of native species—oysters, cordgrass, etc.,” explains Dr. Chang.

Failure to manage species in one place can have a ripple effect in other places—especially if the failure occurs in a place like the San Francisco Bay.

“The Bay is a hotspot because of its long history as a recipient of invasions from many parts of the world, via many vectors,” Dr. Chang details. “And though the Bay is no longer the largest trade hub on this coast, many invasions do appear first in San Francisco Bay. From here, they can then spread to other locations along the coast, either through natural dispersal of larvae, or via human-aided means such as on boat hulls.”

There are special challenges to managing a highly urbanized estuary like San Francisco Bay, stemming from the interactions between the natural, non-human-influenced processes of the estuary itself, and the many ways in which humans have modified the estuary. Although these complex interactions make the process daunting, it’s critically important to understand how this ecosystem works.

“In a functional sense, if we change the way the local ecosystem works, there almost certainly is some sort of spillover of that impact to neighboring locations,” cautions Dr. Chang. “How big that effect is, we don’t know; it may be tiny, but we’d want to study it to find out.”

Top image: The colonization of a solid substrate in the intertidal zone by the Californian mussel (Mytilus californianus) as well as barnacles and a sea star. (Credit: Larry J. Friesen)