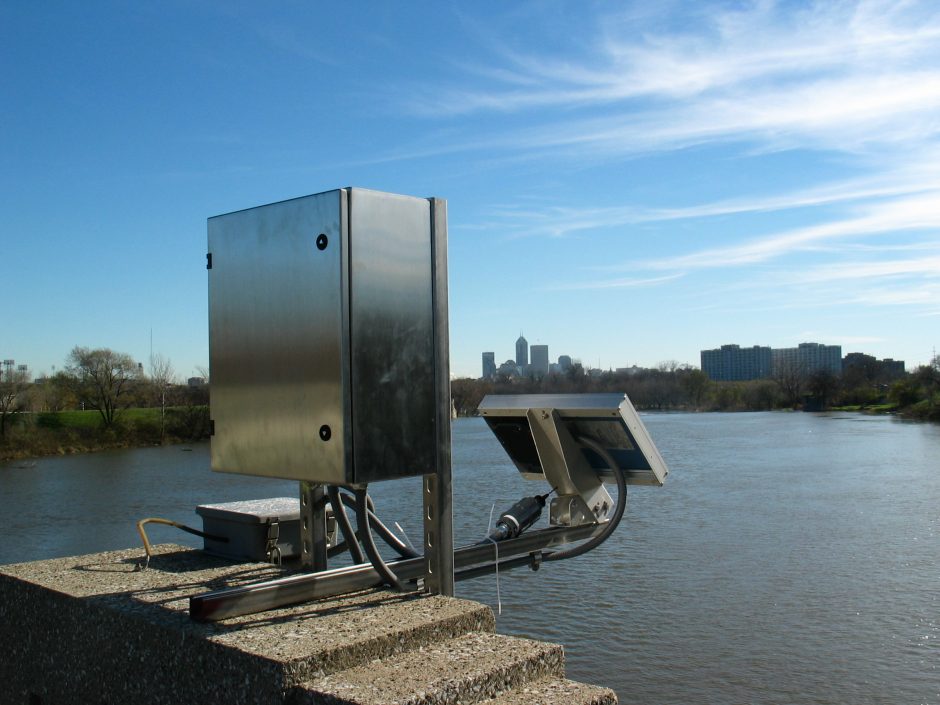 The White River looms large in Indianapolis, with some stretches spanning more than 500 feet wide where it runs through downtown. But the river has historically received more sewage than respect.

But, like many urban rivers, the White River is in the midst of a slow recovery from decades of neglect and abuse. Between a massive $2 billion sewer improvement project to new funding for programs to educate people about the river and get them on the water, the recovery could hasten as momentum builds behind the idea that a healthy, accessible White River would enrich the city and its citizens. Behind that work, a growing number of water quality monitoring programs will help track improvements on the river and catch any emerging pollution concerns.

Two of those monitoring programs originated under the water utility that has split time between the city public works department and Citizens Energy Group. The state, county, and U.S. Geological Survey also monitor the river and its tributaries. And in the summer of 2017, the Nina Mason Pulliam Charitable Trust announced around $5 million in White River-related grants, some of which will fund new water quality monitoring programs.

Tom White, who has worked for the utility on White River water quality issues for decades, said he’s watched as the river improved since he grew up in the city.

“You don’t see the oil sheens that you used to see,” said White, an environmental field technician with the Citizens office of Environmental Stewardship. “It doesn’t have as many odor problems. The river just looks a little better. ”

But a legacy of industrial pollution and sewage-related bacterial contamination, as well as a lack of access sites, make recreating on the river less common than it could be. Industrial discharges have largely dried up thanks to the Clean Water Act. A solution is underway for the sewage issue, but for now, a storm that drops more than a quarter-inch of rain on the city can send untreated sewage from the combined wastewater and stormwater pipes directly into the White River and smaller tributaries that fan out throughout the city.

“When that hits the downtown area where the CSO are, that washes directly into the river really fast and it really drops the oxygen levels quickly.”  It’s especially troublesome in low-flow areas that grow warm in the summer months.

Utility crews previously had to travel the river with handheld meters to check for low-oxygen areas after storms. But now they rely on real-time data from several continuous water quality monitoring stations installed along the river. In addition to oxygen, they monitor pH, temperature, and specific conductivity. If they see an oxygen problem, they have options. For example, the utility can flush the low-oxygen water out by letting more water through a dam on Fall Creek Reservoir, which sits on a tributary that joins the White River upstream of the city.

The data from the continuous stations also helps the utility develop its long-term control plan, White said, allowing them to look at years data to see if there are improvements. They can also see if water quality improves at a particular station if a nearby sewer outfall is taken offline for maintenance.

The continuous stations, which run from May to December, supplement an older intensive monitoring program tied to the water utility that lays out nearly 30 spots along the river for grab samples. That program supports the city’s National Pollutant Discharge Elimination System stormwater permit.

Both programs will help evaluate the $2 billion project underway to alleviate the combined sewer overflows: DigIndy, Citizens’ underground tunnel system designed to capture and store excess sewage generated by storms until it can be treated and released into the river without polluting it. Digging has begun, and once complete the 27-mile tunnel system will store more than 250 million gallons of sewage.

“They’re supposed to be able to capture and treat 99 percent of the overflows,” White said. “The impact on the river is going to be huge.”

The U.S. Geological Survey also conducts real-time monitoring in the White River watershed around Indianapolis. The agency has an extensive streamflow monitoring network throughout the country, and several of their gauging sites in Indiana have been upgraded as a part of their growing “Super Gage” network that adds continuous water quality monitoring sensors to their streamflow sites.

One of those stations is on White River tributary Fall Creek in Zionsville, a quickly growing suburb of Indianapolis. The station sits upstream of Fall Creek Reservoir, a source of drinking water for the city.  The land use in that basin is changing from agricultural to urban, so the agency added a nitrate sensor to the super gage there.

“In Zionsville, we’ve upped our game there,” said Megan Shoda with the USGS Ohio-Kentucky-Indiana Water Science Center. “With discrete samples, we miss a lot of the peaks. We don’t get the high highs and the low lows. That’s really one of the messages of these super gages — how much more we can collect and how much data we can gather doing continuous monitoring versus discrete monitoring.”

More monitoring work is coming to the White River. The Nina Mason Pulliam Charitable Trust announced $4.9 million in grants this summer to launch the Partners for the White River collaboration. Part of that will go to the White River Alliance to coordinate monitoring among other partners including the Nature Conservancy and Hoosier Environmental Council. The Partners program will also back work to improve water quality and recreational access, and better educate Hoosiers about their impacts on the river.

“The value of a clean and protected White River to our communities, wildlife and economy cannot be overstated,” said Kent Agness, trustee, Nina Mason Pulliam Charitable Trust. “The work to be accomplished through the Partners for the White River will significantly improve water quality, while allowing more people to enjoy the river and become involved in protecting it for the communities and wildlife who depend upon it.”