Wildfires Cause Surges In Erosion Rates On Forested Mountains 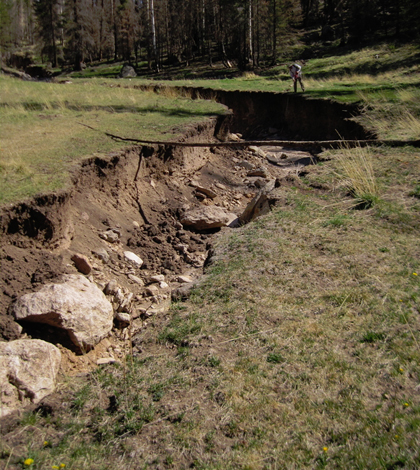 Once the 2011 Las Conchas fire burned this forested region of New Mexico’s Valles Grande, water from summer rainstorms tore this ravine through a grassy meadow. The ravine is more than 2 meters deep. (Credit: Caitlin Orem / University of Arizona)

The effects of wildfires on erosion rates can be extreme. Take an investigation by researchers at the University of Arizona — they found that 1,000 to 10,000 times more rocks and soil can be lost in the year following a fire when compared to unburned regions with similar features.

Such a sudden surge in erosion rates can have outsized effects in shaping forested mountain landscapes, like the one where the study took place, near Valles Caldera in New Mexico. The study is the first to assess the impacts of wildfires on such landscapes by combining several different ways to measure short-term and long-term erosion rates.

Scientists had already been studying erosion in seven mountain watersheds near New Mexico’s Valles Grande but weren’t focused on wildfire. When the Las Conchas fire burned two of their study areas, they seized the opportunity to compare the rates that watersheds were stripped of soil and rocks before and after the severe wildfire.

The scientists began studying the role of erosion in sculpting the mountain watersheds that drain into the Valles Grande, including those on Redondo Peak and Cerro del Medio. The goal was to determine topographic change by assessing the volume that had been removed or deposited.

Working with the National Center for Airborne Laser Mapping, the researchers used a technology called LIDAR (Light Detection and Ranging) to create a digital map, or digital elevation model (DEM), showing the area’s surface relief at that time.

Although Redondo Peak, one of the team’s study areas, now has steep-sided ridges and deep valleys, previous investigators showed that Redondo Peak formed 1.24 million years ago as a rounded volcanic dome.

To calculate long-term erosion rates for Redondo Peak, the team needed to figure out how much rock and soil had been stripped off the mountain and how long it took for that material to be removed. Using the digital elevation model, scientists calculated the volume of material eroded from the original dome over time. Dividing that volume by the mountain’s age gave them the average long-term erosion rate.

Such a long-term rate incorporates many different events in the mountain’s history. The researchers already knew events such as flood or wildfire could increase erosion rates. The team corroborated their DEM-based calculation by measuring how much beryllium-10 had accumulated in the soil, providing a sort of “erosion clock” over time scales of thousands of years.

The researchers found the long-term erosion rate for Redondo Peak was 100 times greater than the background rate, indicating erosion rates on the mountain had been greater in the past. Redondo Peak had no wildfires during the time the team took stream samples.

A nearby mountain with similar terrain, Cerro del Medio, had a severe forest fire in 2011, giving the team the opportunity to measure post-wildfire erosion directly. Post-fire, the increase in erosion was obvious — large boulders had rolled down the slopes and into the meadow below.

The team had already made a pre-fire digital elevation model of two Cerro del Medio watersheds. But they made new DEMs of the changing landscape right after the fire and again 10, 13 and 22 months later.

By comparing the pre-fire DEM to the series of post-fire DEMs, scientists found the burned watershed lost 1,000 to 10,000 times more sediment and rocks in the first year after the fire than did a similar but unburned watershed on Redondo Peak.

The researchers calculated that over a million years, if such post-wildfire erosion occurred for a year just once every 30 to 300 years, enough material would be removed to sculpt Redondo Peak’s original dome into the steeply incised mountain it is today. In addition, the team’s estimate of past wildfire frequency matches what other researchers found by studying the natural records of wildfires contained in the region’s tree rings and lake sediments.

The findings show that erosion after severe wildfires can be a dominant force shaping forested mountainous landscapes of the U.S. Intermountain West. They were gleaned as part of the Santa Catalina Mountains and Jemez River Basin Critical Zone Observatory, a project funded by the National Science Foundation. The Geological Society of America also funded part of the research.

Full results of the work can be found in the Journal of Geophysical Research: Earth Surface.

Top image: Once the 2011 Las Conchas fire burned this forested region of New Mexico’s Valles Grande, water from summer rainstorms tore this ravine through a grassy meadow. The ravine is more than 2 meters deep. (Credit: Caitlin Orem / University of Arizona)