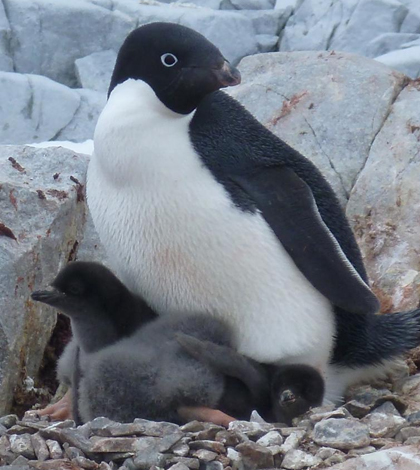 Not long ago, we covered work done by researchers at the University of Delaware to study the dynamics of the Antarctic food web. Their target? Adelie penguins, who were, and still are, seeing declines in population.

Their efforts at that point were geared toward figuring out what the penguins, as well as many other creatures in the region, were eating. To get there, the investigators used a slew of tech, including satellite tags mounted on the penguins themselves, autonomous gliders and coastal radar devices to map currents.

The findings of that work, which helped to inform numerous papers, have since been used to inform a more recent study relying on satellite data and models to predict possible impacts the penguins may experience due to climate change. Findings from the effort may prove useful in managing Adelie populations as well as other species that share the region.

One objective was to understand the effects of climate change on Antarctic Adelie penguin colonies, as variation in climate has influenced their distribution patterns across Antarctica for millions of years.

As glaciers have expanded in the past, records show they’ve covered important Adelie breeding habitats with ice, which has spurred the penguins to abandon those colonies. But when the ice sheets melted during warmer periods, Adelies got those rocky breeding grounds back. Results of the new analysis indicate that the benefit they once saw from warming may be disappearing.

“It is only in recent decades that we know Adelie penguins population declines are associated with warming, which suggests that many regions of Antarctica have warmed too much and that further warming is no longer positive for the species,” said Megan Cimino, lead author of the study while a doctoral student at the University of Delaware, in a statement. She is now a postdoctoral scholar at Scripps Institution of Oceanography.

Cimino and others examined the number of years from 1981 to 2010 with novel or unusual climate during the Adelie penguin chick-rearing period from past satellite observations. They also used an ensemble of global climate models to make predictions about Adelie penguin habitat suitability from 2011 to 2099. Documented population trends were used to validate the models.

“When we combined this data with satellite information and future climate projections on sea surface temperature and sea ice, we can look at past and future changes in Adelie penguin habitat suitability,” Cimino said.

Their results suggest that climate novelty, particularly warm sea surface temperatures, is detrimental to Adelie penguins. While the specific mechanisms for the relationship remain unknown, the study did pinpoint areas where climate change is likely to create a high frequency of unsuitable conditions during the current century.

According to Cimino, the southern West Antarctic Peninsula (WAP), associated islands and northern WAP regions, which are already experiencing population declines, are projected to experience the greatest frequency of novel climate this century due to warm sea surface temperatures. This suggests that warm sea surface temperatures may cause a decrease in the suitability of chick-rearing habitats at northerly latitudes.

Cimino has worked extensively at Palmer Station, where she says penguin colonies there have declined by at least 80 percent since the 1970s. Within that region, she and others saw the most novel climate years compared to the rest of the continent, or the most years with warmer than normal sea surface temperatures.

But there is some hope, as several refugia — areas of relatively unaltered climate — may exist in continental Antarctica beyond 2099, which could buffer species-wide declines. Understanding how these refugia operate is critical to understanding the future of this species.

“The Cape Adare region of the Ross Sea is home to the earliest known penguin occupation and has the largest known Adelie penguin rookery in the world,” said Cimino. “Though the climate there is expected to warm a bit, it looks like it could be a refugia in the future, and if you look back over geologic time it was likely a refuge in the past.”

The researchers report that climate change impacts on penguins in the Antarctic will likely be highly site-specific based on regional climate trends, and that a southward contraction in the range of Adelie penguins is likely over the next century.

Contributors to the work also represent Stony Brook University and the National Oceanic and Atmospheric Administration. The study was funded through the NASA Biodiversity program.

Top image: University of Delaware researchers project that approximately 30 percent of current Adélie colonies may be in decline by 2060 and approximately 60 percent may be in decline by 2099. Warming in Antarctica, once beneficial to the penguins, has reached a tipping point and is causing the sharp decline. (Credit: Megan Cimino / University of Delaware)