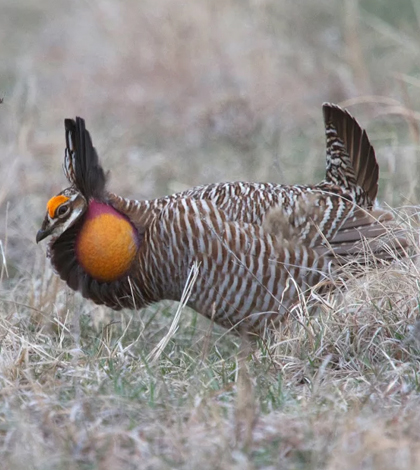 Investments in renewable energy have risen greatly over the past decade, drawing attention to both the benefits and drawbacks of the relatively young industry. Wind energy has drawn particular attention as a renewable energy source for its cleanliness, cost-effectiveness and sustainability. But it’s not without its criticisms: The massive turbines required to harness wind power can be noisy, aesthetically unappealing and may even impact nearby wildlife.

Providing insight into that impact, new research has found that wind energy development drives grassland birds to abandon mating sites and alter other aspects of their behavior. Researchers from four U.S. universities studied greater prairie chickens and their leks — sites where males gather each spring to conduct mating rituals for onlooking females — for five years to determine their responses to nearby turbines. Their findings are published in The Condor: Ornithological Applications.

Prairie chickens provided an ideal target species, as they require plenty of space and are sensitive to habitat loss and fragmentation, said Brett Sandercock, co-author on the study and professor of wildlife ecology at Kansas State University. Conservation efforts directed at prairie chickens would likely benefit a whole range of grassland birds, he said, citing his past research that revealed shared habitat preferences between many ground-nesting species.

“Our project was unique because we considered multiple impacts of wind power on prairie chickens,” Sandercock said. “The emerging story is that proximity to energy development affects some aspects of their breeding ecology but not others.”

Over the five-year study, the researchers visited 23 leks at three Kansas sites designated for wind energy development. At each, they surveyed male bird populations and recorded the body mass of trapped individuals. The researchers intended to conduct before-and-after comparisons at each turbine site, but only one was eventually developed for wind power, Sandercock said.

“One of the challenges to our work is that our pre-post comparisons are only based on one study site,” he said. “Nevertheless, the preconstruction data from the three sites has been useful for making regional comparisons of different habitat conditions in eastern Kansas.”

The researchers found that males commonly abandoned leks within eight kilometers of wind turbines. Furthermore, average male body mass was reduced near the turbines. An earlier study from the same team showed the female prairie chickens increase the size of their home range when wind energy development occurs nearby, and avoid turbines in their movement patterns. The females don’t, however, seem any pickier when it comes to selecting a nest site near areas of wind energy development. Nor does proximity to turbines impact the survival of their nests.

The study uncovered one impact of turbine construction that particularly puzzled the researchers.

“One unanticipated result of our study was an increase in female survival following installation of turbines,” Sandercock said. Before wind power construction, he said, female prairie chickens were especially vulnerable to predation during lekking. But the mammals and other birds that prey upon the prairie chickens seem to be affected by the turbines as well.

“This finding raises the interesting possibility that wind power may affect trophic interactions between predators and prey,” Sandercock said, but noted that the team’s data on predator activity was limited.

The researchers continue to study prairie chickens and other grassland birds, and are in the processing of publishing a paper regarding the impact of patch-burn grazing systems on prairie chicken nest survival. Current research shows a strong potential for changes in rangeland management to improve prairie chicken productivity, Sandercock said.