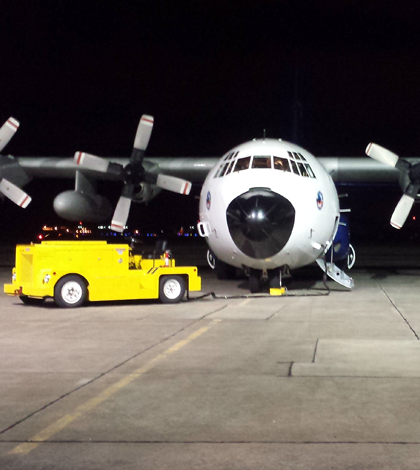 The C-130 research aircraft after a flight from New York City to the Atlantic Ocean to measure air pollution. (Credit: Joel Thornton)

As atmospheric research goes, a lot of time is spent studying the airborne chemistry that happens in the summer. Things like ozone production and levels of particulate matter get plenty of attention during the warm season. But few investigations have captured the effects that winter has on air pollution.

Scientists at the University of Washington helped to lead an air monitoring campaign to look deeper into the effects of cold conditions on air pollution. Their research flights, which took place in a C-130, canvassed parts of the Ohio River Valley, U.S. Northeast and the Mid-Atlantic states.

“The northeast U.S. is a densely populated region with relatively large emissions of pollutants from a variety of sources of interest to air quality and climate policy,” said Joel Thornton, professor of atmospheric sciences at the University of Washington and a principal investigator on the Wintertime Investigation of Transport, Emissions and Reactivity campaign. “The highly urbanized regions of New York City, Philadelphia, Washington, D.C., are all within close proximity to the coal-fired power plants that are located throughout the Ohio River Valley and the oil and gas extraction sites in Pennsylvania, Ohio and West Virginia.”

Studying in these regions is also valuable because of the vast differences they hold in land use and position. For example, data collected over urban areas to the north can be compared to those taken near agricultural lands and smaller cities to the south, and scientists can get a grasp on the meteorological contrasts each region sees during the same season. Working off the Atlantic coast gives them another advantage: They can follow air pollution as it flows far offshore, sometimes days downwind of its original source, and see how pollution transforms as it becomes part of global cycles. The C-130, a flying laboratory maintained by the National Center for Atmospheric Research, chipped in to help scientists take measurements of trace gases and particulate levels at speeds hitting 200 nautical miles per hour. It also carried scientists as they did some tricky maneuvers to capture hard-to-reach measurements.

Since air pollution tends to stay close to the ground in winter, researchers had to conduct “missed approach” flight patterns — coming close to landing about 100 feet from runways and then surging skyward — while taking measurements.

“This campaign was both exciting, as no other campaign quite like it has been conducted before in the wintertime,” said Thornton. “So every flight we made seemed to lead to some new insight.”

Some of those were gained during long nighttime flights, as well as during the unusually active winter weather over the East Coast in early 2015. A view from the cockpit as scientists fly over Long Island to sample nighttime pollution from New York City. (Credit: Joel Thornton)

“The combination of the very busy airspace, stormy weather and needs for instrument and crew rest made planning and executing all of our research flights in a timely manner quite difficult, but we succeeded in the end on time,” said Thornton.

Findings from the work are not yet available, but Thornton and others expect that the speed at which air pollutants transform into secondary pollutants, like ozone, will be much lower in the winter than in summer. More intense sunlight and higher temperatures drive chemical reactions in the summer, converting emissions sometimes as quickly as a day, which keeps them close to their source.

“Our understanding of what happens to these same pollutants when emitted in the winter is much more limited, but we expect that their transformation timescales are much longer, and therefore are spread over greater distances before being removed, with implications beyond local and regional scales out to the global atmosphere,” said Thornton.