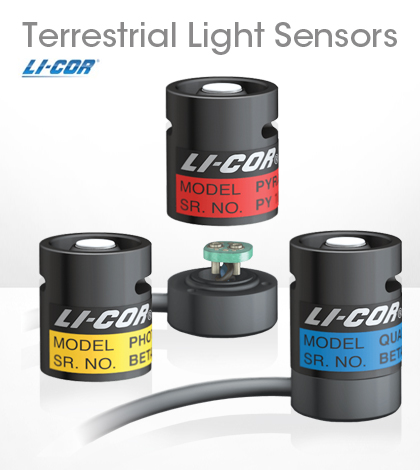 For environmental professionals looking to measure light, the sun’s energy or photosynthetically active radiation, there is no better choice than LI-COR’s all-new line of terrestrial light sensors. The series, including the LI-190R, LI-200R and LI-210R, has been redesigned from the ground up and is more convenient, reliable and durable than ever before.

The new design centers on a modular setup that lets users detach the sensor head from the base. This makes it possible to swap out sensor heads for calibration or to measure different light parameters. In addition, it adds to project flexibility, saving users time and money.

“After 40 years of manufacturing light sensors and receiving feedback from scientists and researchers around the world, we found that we could implement design changes to improve both the performance and the durability of our sensors,” said Dave Johnson, senior product manager at LI-COR Biosciences.

Johnson goes on to identify two key advantages of the new design. For one, it eliminates the intensive work some customers had to do in the past to send light sensors in for calibration, including digging up conduit to remove entire sensor-and-cable units from monitoring stations.

“To remove this complexity, we designed the sensors so that the heads can be removed from the cable and then simply shipped to LI-COR for recalibration, said Johnson. “Our pyranometers are very popular among the solar industry, and this is where we have seen most of the excitement about this feature.”

The second key advantage touches on savings when it comes to maintenance. As the LI-COR sensors are typically deployed outside, they are at nature’s mercy. Wild animals can chew through cables and the sensors are also subjected to lightning strikes. Common human errors, like dropping sensors or accidentally cutting cables, also sometimes happen.

“If damage happens to either the cable or the head, then only that component would need to be replaced,” said Johnson. “This can be done at a fraction of the cost, delivering the customer significant savings.”

In addition to the lower maintenance costs, being able to swap sensor heads means that scientists interested in more than one parameter can now use one base with multiple LI-COR sensors. So a researcher can easily measure the amount of photosynthetically active radiation impacting plants in an area with a LI-190R Quantum PAR head and then swap in a LI-200R Pyranometer head to measure solar radiation coming from the sun.

Johnson points out that the new Quantum PAR sensor has improved optics, which lets it equally measure light across a waveband of 400 to 700 nanometers (light that plants use for photosynthesis) better than any other PAR sensor on the market. That means its measurements are more accurate.

“With the new optics in the quantum sensors, we improved specifications to make an even more accurate sensor for scientists interested in research-grade measurements,“ said Johnson. “That is very important for researchers and scientists who are carefully studying our climate’s interactions between ecosystem and atmosphere.”

There are no new maintenance concerns for the redesigned line of sensors, which is owed to a more robust housing that helps bolster durability in extreme conditions. Johnson says that users can buy a Sensor Base Cover to put over the sensor base when heads are sent in for recalibrations. Other than that, the only other accessory is a Mounting and Leveling Base that keeps the sensors level, important for collecting accurate data.

“Our team is extremely satisfied with the ability to provide these high-performance sensors at a cost that allows users accessibility to the measurements they need,” said Johnson.