With Drought, Some Western Trees Hunker Down While Others Give Up 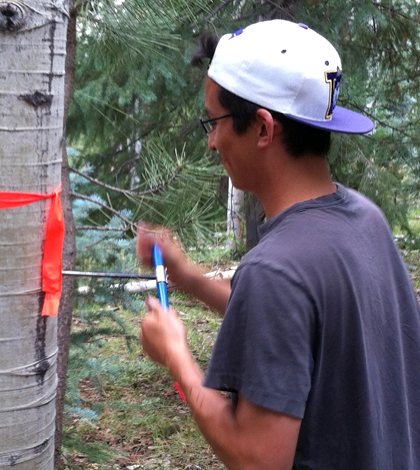 In the face of continuing drought conditions in the U.S. West and possible climate changes in the future, scientists are interested in the responses that forests in the region will have. After all, forests and the trees that make them up are dynamic, living beings that move and shift as conditions around them change.

In a summer 2014 investigation looking at parts of the San Juan National Forest in Colorado, scientists at the University of Washington have made new finds about the responses that two tree species, trembling aspen and ponderosa pine, have in the face of changing water availability. Their results point to a stark contrast in how the two species adjust to dry times.

One, the aspen, appears to be too optimistic for its own good. The ponderosa pine, conversely, exhibits more flexibility in adjusting to drought and perhaps a more astute realization of what it needs to do to survive.

Scientists used various methods to dissect the drought dynamics of the two tree species, including gathering core measurements to track growth rates. They also used a PMS Pressure Chamber Instrument, a device that uses pressurized nitrogen to squeeze water out of tree leaves and gauge their water stress. Gathering the leaves, mostly taken from the tops of the two tree types, was a little less high-tech.

“Probably the most comical method was to use a shotgun trying to get leaf and branch samples from the top of the canopy,” said Leander Anderegg, a doctoral student in the biology department at the University of Washington. The shots were made using bird shot, and Anderegg and others took them at various times throughout the day and night to get good coverage of what sort of water stress the trees saw. “Sampling at 3 a.m. and noon gives you a more complete picture of water stress.”

After gathering the leaf and branch samples, Anderegg would throw them into the pressure chamber to see what sort of water stress they exhibited. Tree cores showed researchers what was happening inside each tree type’s xylem tissue, and they also considered factors like tree shape, size and leaf physiology.

Over the course of the summer-long investigation, the measurements, taken from aspens and ponderosa pines at the dry-edge extremes of their ranges within the forest, revealed some intriguing differences between how the two trees respond to drought.

Aspens, Anderegg says, tend to stick to business as usual and respond a little less than they should. “Aspens pull too hard in their xylem and essentially their pipes break, but we had no idea that different aspens have different pipes,” he said. Anderegg points out that aspens at the dry end of their range were found to be shorter and have fatter leaves and stronger xylem tissue.

Those strategies are at least a response, but only make sense if drought conditions don’t persist. If they do, the aspens are ill-prepared to cope. For the ponderosa pines, their go-with-the-flow-itiveness appears to make them much more resilient over the long term.

“Ponderosas essentially grew the same tree at the top and bottom. At lower elevations, the really drought-limited trees closed the stomata on their leaves to regulate,” said Anderegg. “While aspens hunkered down, ponderosas just decided to shut up and wait it out.” Anderegg admits that he was surprised by how differently each tree responded to the dry conditions, but explains that each species has a contrasting evolutionary history and background, even as they inhabit the same regions nowadays.

“We expected their strategies to not be quite as dichotomous,” said Anderegg. “The really interesting implication of that is that it probably means the two species are going to shift ranges in response to climate change in different ways.”

For example, aspen trees will likely move to more northern ranges in different ways than ponderosa pines. Aspens will probably do well as things get warmer, says Anderegg, but will suffer dramatically in major droughts that could cause “catastrophic failure” of them on a large scale. Ponderosa pines will likely have a much smoother transition over time and their key strategy of just giving up might make them more suited for low-elevation areas.

“From a management perspective, it’s hard to manage things to keep them from dying in drought,” said Anderegg. “But the positive spin that I get from this is that our forests are dynamic places and that we can use science to limit this and keep the dynamism from being a bad thing. We know they’ll change, but hopefully we can manage and preserve the things that we care about: water, erosion control, hunting, fishing and things like that.”

Funding for the investigation was provided by the National Science Foundation (Grant: DGE-1256082), the University of Washington biology department, Sigma Xi research society, the American Alpine Club and the Charles Redd Center for Western Studies. Full results have been published in the journal Global Change Biology.