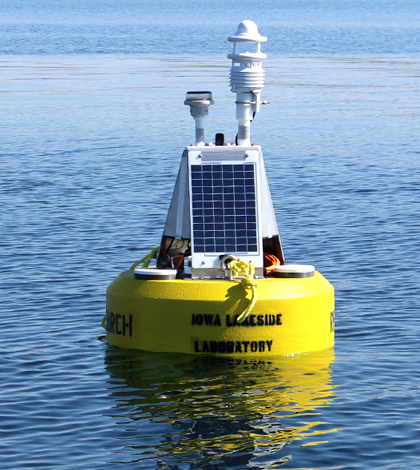 The Iowa Lakeside Laboratory is a special place. It has existed as a limnological field station for 106 years, while most others only make it to 16.

Located in the Okoboji region, it sits at the center of a string of lakes that are unusual because of their location so close to the Great Plains. It is somewhat remarkable that they’re there at all given the drier regions nearby. The crown jewel of these is West Okoboji Lake, a large, deep lake with good, clear water and plenty of activity around it.

For more than a century, the Lakeside Lab has offered courses and research opportunities for students interested in studying West Okoboji and other lakes nearby. These include activities like sampling diatoms and algae, taking Secchi disk measurements or tracking dissolved oxygen levels in the water.

With such an extensive record in place, it didn’t take long for researchers with the Global Lake Ecological Observatory Network, or GLEON, to realize the potential of West Okoboji Lake as a new member site. There was just one thing missing – a buoy.

“Since our lake has been well studied – Birge and Juday (legendary limnologists) came here in the 1920s – this lake has been a focus of limnology,” said Michael Lannoo, director of the Iowa Lakeside Laboratory. “They (GLEON) approached us about the possibility of putting a buoy in.”

Soon after the idea was put forth, Sarah Spaulding, an ecologist with the U.S. Geological Survey and former visiting professor at Lakeside Lab, joined with Mindy Morales, a doctoral student at Iowa State University, to put together a white paper and a prototype proposal for the buoy. Lannoo began taking those to meetings with citizen groups around the lake to get their support.

It wasn’t hard to sell the project to the groups, as most everyone would benefit from it. The lab, as well as the lake’s health, would benefit scientifically from its data, while boaters and fishermen would benefit because it could let them know when conditions were safe to go out on the water. And researchers around the world could gain access to data on West Okoboji Lake. Community groups that Lannoo presented to include the Dickenson County Clean Water Alliance, Friends of Lakeside Lab, Okoboji Foundation and the Okojobi Protective Association. Funding, however, ultimately came from the State of Iowa Hygienic Lab and the University of Iowa Research and Economic Development Group. Within 10 months, the project had gone from idea to reality, which is remarkably fast.

A NexSens CB-450 Data Buoy is the core of the monitoring platform, supporting a NexSens iSIC-CB Data Logger equipped with cellular telemetry. Connected to this on the topside is a Lufft WS600 Multi-Parameter Weather Sensor that collects measurements on air temperature, humidity, barometric pressure, wind speed and direction and rainfall. Sitting next to it is a solar marine light that acts as a beacon to let boaters know its location on the water when the sun goes down.

On the buoy’s bottom side is a YSI EXO2 Multi-Parameter Water Quality Sonde that measures West Okoboji Lake’s water temperature, conductivity, pH and dissolved oxygen levels. There is also a Vaisala GMT222 Carbon Dioxide Transmitter fitted with a special membrane to let it collect data on CO2 levels underwater, which is a pretty rare sensor for a buoy. The whole platform was deployed on April 30.

“We got it in the water a lot quicker than we thought we would,” said Lannoo, noting that his team is still learning its ins and outs. “It’s like having a new computer that you’ve owned for a few days, but not quite having all the software installed.” Part of getting used to the buoy is using the WQData LIVE Web Datacenter where its data are displayed online. It partners with the LIVE Datacenter smartphone app to show the buoy’s data in a mobile format. That’s something the residents living around the lake have been intrigued by as well, says Lannoo, who has been making rounds making presentations on the new buoy to community groups.

“I always ask at meetings – ‘You wanna know what you got for your money?’” said Lannoo. “Well, pull out your smartphones, download this app and use it.”

Support for the new buoy has been quite good, says Lannoo. He adds that it has infused a lot of energy into the field station and surrounding community, which can’t often be said of scientific equipment.

“They (community members) really have adopted it,” said Lannoo. “It’s a point of pride.”

So far, the buoy’s data have helped locals, as well as tourists, keep track of conditions on the water. But they haven’t revealed any big surprises yet. Lannoo says the oddest things that the buoy’s picked up have been anomalies, like storms, but he’s hopeful they will reveal other conditions that impact the workings of West Okoboji Lake.

With a database going back almost a century, the buoy is adding real-time, high-resolution monitoring of lake conditions in advance of more short-term changes, says Lannoo. Some of those that scientists at Lakeside Lab are interested in include recent invasions of zebra mussels, Eurasian carp and curly-leaf pondweed; the effects of climate change; and more general questions concerning how the lake stratifies.

“We’re gonna put in a temperature and DO (dissolved oxygen) string,” said Lannoo, which will aid studying West Okoboji’s turnovers. The sensors will sit at 2-meter intervals and link all the way to the lake’s bottom, a depth of about 30 meters.