Working With the Community, Not In Spite of it: The Water Institute of the Gulf 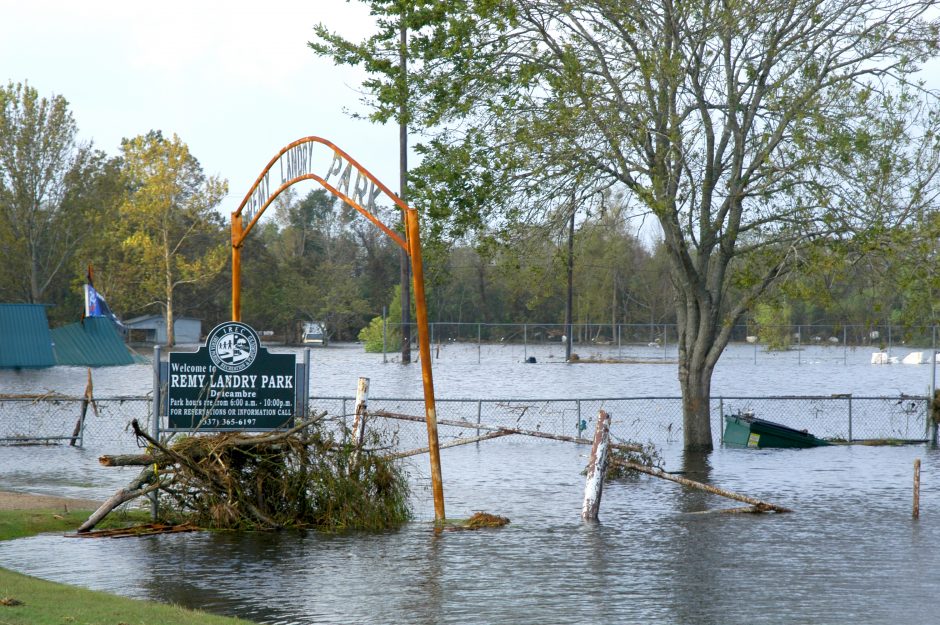 A park in Delcambre after Hurricane Rita. (Credit: Win Henderson)

In 2005, two hurricanes changed the face of the Gulf Coast forever, and the way many locals thought about life there, too. Hurricane Katrina made landfall on August 29, flooding more than 80 percent of New Orleans and damaging structures with winds of up to 140 miles per hour. More than 1,800 people lost their lives during Katrina, and more than $108 billion in damages across the Gulf Coast accrued.

As if this wasn’t enough, Hurricane Rita came ashore on September 24, hitting a Southeastern Louisiana that was already in tatters. This second storm spread the damage wider, from western Florida to eastern Texas. The storm released chemicals, oil, and other hazardous materials all over the Gulf region and damaged and sank thousands of vessels in the Gulf.

These storms prompted scientists, engineers, policymakers, and municipal planners in the Gulf region to think about preparing for major storms in new ways, and one of the results was the formation of the Water Institute of the Gulf. Since 2011, the institute has served as a centralized, independent source of research and science along the Gulf Coast. Scott Hemmerling, Director of Human Dimensions for the Institute, explains the basic raison-d’être of the Institute.

“The Water Institute of the Gulf is an independent, non-profit research institution that is dedicated to finding solutions to many of the most vexing issues faced by residents of coastal Louisiana and beyond. While much of the Institute’s work is focused on large solutions, we also work with communities and local organizations to make sure that the voices of local residents are never lost amidst the drive for scientific solutions.”

The Water Institute of the Gulf

The Water Institute of the Gulf takes a multi-pronged approach to protecting the lands, waterways, and inhabitants of the Gulf Region. The work of the institute takes place in several areas: integrated natural systems modeling, analytics, and integrated decision support; field investigations; real-time sensor data collection and field work; and monitoring design.

The institute recently finished a two-year knowledge gathering project called “This is your shield . . . This is your estuary” designed ultimately to help build community and coastal resilience to Louisiana’s rapidly changing coastline through the restoration of key ecosystem functions. The idea behind it is to engage with members of the community to improve on existing plans to address land loss and flooding, and to identify problems not yet covered by such plans.

Community involvement is critical to the success of any kind of intervention in Louisiana’s coastal regions, and the unique tactic used in this project was to combine traditional knowledge with scientific techniques.

“The incorporation of community knowledge (as well as traditional ecological knowledge) into the coastal planning process should be an important tool in the toolbox for all planners and scientists,” Hemmerling asserts. “There is a misconception that involving stakeholders in scientific research is something that occurs solely through engaging with stakeholders at the end of a project. We really wanted to show that there are ways to engage with stakeholders and use qualitative research methods to gather valuable data at all phases of the research. At a minimum, this knowledge can be used to ground truth the scientific data and model outputs. More importantly, the potential exists to incorporate this knowledge, if it is rigorously gathered and assessed, into the scientific process itself, possibly even into the numerical models.”

These coastal regions are themselves precious resources, from economic, cultural, and natural standpoints, and as such they are the focal points of competing interests at all times. Home to many endangered and threatened species, commercial and recreational fisheries, ports, energy producing enterprises, and millions of people, these portions of the state are as fragile as they are critical to their stakeholders. Thanks to the combined effects of climate change, disconnection of the Mississippi River from coastal marshes, human impacts, hurricanes, sea level rise, storm surges, and the effects of subsidence, this delicate coastal ecosystem is disappearing quickly. The coast of Louisiana lost more than 1,800 square miles between 1932 and 2010, and more than 300 miles of marshland were lost between 2004 through 2008 alone, thanks to Hurricanes Gustav, Ike, Katrina, and Rita.

A better way to integrate knowledge

The team from the Institute sought to find a better way to integrate the technical, scientific knowledge needed for effective coastal restoration and protection planning with the invaluable insights into the local region that only the residents could provide. They decided to do this by developing and, in the process, demonstrating, a technique for gathering and using community knowledge that would assist technical experts in bridging this knowledge gap.

First, the Institute hosted a one-day technical workshop for 44 natural and social scientists with expertise in various aspects of life in coastal Louisiana. The goal of this day was to collect science-based information about socio-cultural and ecological problems and values in seven coastal habitats: aquatic vegetation, barrier islands, forested wetlands, mangrove stands, marsh, open water, and oyster reefs.

Next, the Institute held workshops in Delcambre and St. Bernard for members of the community. At these workshops participants were asked to mark areas around their community that they felt were important, as well as those they thought were at risk, on a map. The Institute also held community meetings at various events and met with community leaders. Using the data generated by members of the community, they then presented in graphical and map formats the areas of highest value, risk, and priority for protection and restoration.

It’s not always easy to attribute value to something like land, especially when people attach personal or emotional value to family holdings. If a certain tract of land held importance to a single family or person, it was included, but didn’t generate a “hotspot” in the analysis to emphasize the numbers.

“All the points that people identified were included in the analysis,” Hemmerling clarified. “The hotspots on the maps were those areas identified by multiple residents. However, if multiple areas are located along the same feature, even if the exact sites are different, the hotspot mapping will show this.”

The team also took care to ensure that things like family lands would be noted in the data and maps, as Hemmerling explained: “In addition to mapping the locational data, we also coded the interview data. In analyzing the interview data, we were also able to identify commonalities, that may not necessarily be spatial. For example, if family lands were identified as places of value, this will show up in the assessment of the interview data, even if those lands may not show up as hotspots on the map.” Since so much of the coast is affected, the team had many potential locations they could have chosen for the project, but they chose to work with the people of Delcambre and St. Bernard. St. Bernard is on the front lines of coastal land changes in the state, and is home to a relatively high number of residents with deep roots in the area. However, there were other reasons the team focused on these towns.

“Both communities were directly impacted by the 2005 hurricanes (and other subsequent storms) and had to adapt in many ways to changing environmental conditions,” Hemmerling explained. “Delcambre seemed like a logical case study to discuss community resilience due in large part to development of Delcambre Direct, where shrimpers sell their product from the dock directly to consumers. This idea led to the development of the Delcambre Seafood and Famers Market, which has developed into a local and regional attraction, and is a great example of a community that not only bounced back but adapted. St. Bernard also seemed like a logical community from which to gather local knowledge. This is a community that has strong feelings related to some of the management decisions made in their areas, including the impacts of the Mississippi River Gulf Outlet and both existing and planned diversion projects.”

Getting buy-in from the community can be difficult for researchers. Many people in Louisiana, even those directly affected by these issues such as shrimpers, for example, are resistant to scientific approaches that include climate science. However, the Institute’s team on this project didn’t run into this issue much.

“I think that is one of the good things about the way this research was organized,” Hemmerling points out. “Although we moderated the conversations, this was really an opportunity for residents to tell their stories and share their knowledge. Their years of experiences in the environment have allowed them to see the impacts of management activities.”

This wasn’t the only factor; past experience with management in particular, as well as the specific goals of the work—simple information gathering—were probably central to the ease of achieving community buy-in.

“It should be noted that these activities might also include a lack of action,” Hemmerling continues. “I think a key to getting community buy-in was assuring residents that this project was not political and that we had no agenda, other than capturing their knowledge, which we feel is an underutilized source of information. I will note that in St. Bernard, which really has been a key focus in the development of a number of coastal management features, residents were initially much more leery of our intentions than in Delcambre, which is in an area that has not been a huge focus of restoration activities. However, once we explained to residents what we were doing, participation in the activities was great.”

Part of the Institute’s ultimate goal with this project—and others—is to promote this kind of participatory model for application to very different kinds of scientific and technical problems, in various regions.

“This type of model can definitely be applied in very different kinds of regions,” Hemmerling states unequivocally. “The issues may differ, but every community has people whose lived experience in that particular environment gives them a unique knowledge that cannot be captured in even the most advanced scientific models.”

Top image: A park in Delcambre after Hurricane Rita. Credit: By Win Henderson (This image is from the FEMA Photo Library.) [Public domain]