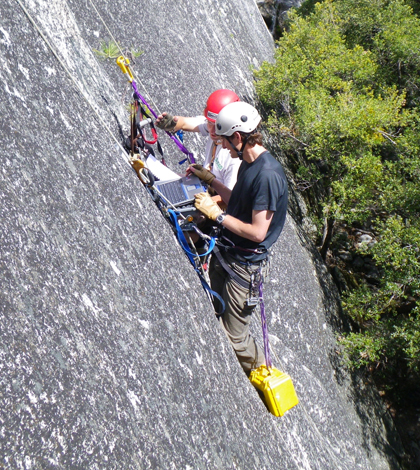 For more than 100 years, geologists have guessed at the roles that temperature plays in causing rock falls. The idea was that heating and cooling in some way contributed to the expansion and contraction of the rock faces to weaken them over time and cause them to fall.

But there hasn’t always been the instrumentation needed to test those ideas, and there was pretty much only one way to get the data necessary: rock climbing. For some, that is not the most exciting way to spend a day at the office. But for two geologists who have just wrapped up a long-term study of thermal dynamics and the roles they play in rock falls at Yosemite National Park, making the climb was an afterthought.

“Neither my coauthor or I thought twice about placing the sensors on the cliffs. It seemed like the right way to do the experiment,” said Brian Collins, research civil engineer with the U.S. Geological Survey who completed the work with Greg Stock, park geologist at Yosemite. “Every time we would download a data set, we had to climb. When we installed the sensors, we were hanging from a cliff.”

This took place along a slab of granite that has been separating slowly from a rock face in the park for years. It’s about 19 meters tall, 4 meters wide and 10 centimeters thick, Collins says. Because of its shifts over time, there is a small crack behind it that the researchers wanted to monitor.

But their efforts didn’t just cover one or two seasons. In order to get a concrete idea of how thermal expansion and other things affect the slab, Collins and Stock tracked the changes it experienced over three-and-a-half years using a variety of instruments.

Behind the slab, they ran wire strain gauges to measure how much the crack opened and closed. Temperature sensors were placed along the front of the rock section as well as behind it to see what heat differences there were. The researchers tracked light intensity because they were curious if solar radiation played a role, and they also measured humidity.

“We wanted to understand and assign triggering mechanisms to find out what would cause rock falls in the summer time,” said Collins. “There were no explanations for some of the rock falls that we were seeing. That, combined with some anecdotal evidence from rock climbers who had placed their gear in the area and come back to find they couldn’t get it out — we knew that opening and closing could be happening.”

But since no one had set out to study these dynamics before, scientists weren’t sure what to expect they’d find. There was some thought that the crack behind the slab might expand a small amount with more heat. But that and other questions, like the effects of solar radiation and humidity, required taking direct measurements over the course of years.

Their effort was special for the long-term approach that it took to gathering the data, which made it possible for Collins and Stock to identify trends that shorter studies might not have been able to convey. They sought to answer two questions. One, would they be able to measure the deformation in the rock? And two, would their measurements be meaningful in explaining that the separation was sufficient enough for causing rock falls?

“We processed all that data to see how it could cause cracks,” said Collins. “And we used a lot of things to figure that out, including thermodynamics, fracture mechanics and structural mechanics.”

There were no correlations between humidity and the deformation, researchers found. That makes sense, Collins says, because Yosemite National Park is a pretty dry place. For the impacts of solar radiation, he and Stock found that those were not as influential in the crack’s expansion as temperature was.

“The biggest surprise, in the first month of data, we had the instruments designed to measure a fraction of a millimeter,” said Collins. That is how much they expected that the crack would expand. “Instead what we found was that it was moving much, much more, about a centimeter each day. That was a real eye-opener, and we even second-guessed our data.” Terrestrial LIDAR would confirm that their readings were accurate, however.

Collins says another surprise was that the slab cumulatively moved out with the seasons and year over year. And so the magnitude of the deformations was much larger than had been expected.

These findings are useful for a couple reasons. For one, there’s now a viable cause for the rock falls that Yosemite National Park sees in the summer time, which could help in protecting its visitors.

“When we think about hazards, we need to know what’s causing the rock falls before we can assume when they might occur. This study is a step in that direction,” said Collins. “And it has some applicability for explaining why rock falls continue to happen. It’s different than what people assume weathering is. People would assign it as rain getting into cracks over time, but we think that thermal stress indicators on these cracks may also have something to do with the weathering process.”

Full results of the study are published in the journal Nature Geoscience.