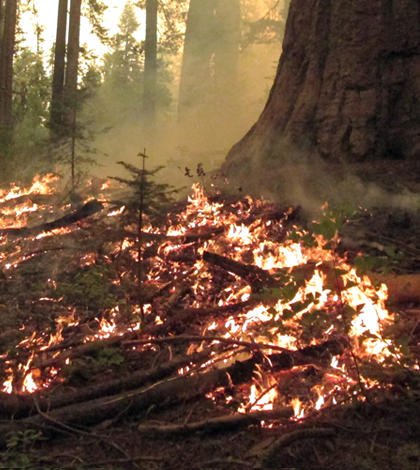 The 2013 Rim Fire burned through 250,000 acres of the central Sierra Nevada, creeping into Yosemite National Park and stopping just a mile short of the San Francisco Bay Area’s water supply reservoir. Though the fire ultimately didn’t hurt water quality or delivery, park scientists are studying impacts in the burned area to help the city prepare in case the area burns again.

“They’re basically trying to size up what their reaction to a fire above the O’Shaughnessy Dam would be or could be,” said park hydrologist Tim Kuhn, referring to the dam impounding Hetch Hetchy Reservoir, which supplies 85 percent of the city’s water.

A few days after the Rim Fire started on Aug. 17, it was clear the flames would make their way into the Yosemite, Kuhn said. That sparked meetings among management from which information would trickle information down to staff as they went about their regular work. Kuhn had time-sensitive field work to wrap up before moving to protect research sites in the path of the fire, lowering monitoring equipment like weather stations to the ground and covering it with reflective space blankets, all while the fire loomed large on the horizon.

“When you were driving east from Tuolumne along the Tioga Road, it looked like you were going straight for this enormous plume,” Kuhn said.

Shortly after the fire was contained months later, Kuhn and his colleagues had instrumented two streams within the burned area of the park to get a better handle on how sediment affects water quality in a post-fire landscape. Sediment removal from drinking water is already an issue for San Francisco Public Utilities Commission, Kuhn said, and a wildfire above the reservoir would presumably have the potential to make that worse by removing vegetation that keeps soil in place.

The streams are both outfitted with sensors for stage and turbidity, as well as an autosampler programmed to start filling bottles when storms roll through and produce runoff that raises turbidity to a certain level. The focus of that work is to develop a model of the relationship between turbidity and total suspended sediment. The researchers equipped small perennial streams in the burned area with autosamplers and other monitoring equipment. (Courtesy Yosemite National Park)

For a second part of the project, they’ve installed a series of sediment-trapping fences on a gradient of burned hillslopes. The researchers are analyzing sediment trapped after storms for attributes like particle size, pH, carbon and nitrogen content.

The hillslope and stream studies would have ideally been linked more closely so the researchers could tie the sediment trap data to what they see in the water quality data, Kuhn said. But the nature of studying the short-term responses to natural disasters doesn’t leaving a lot of time for planning.

Working in the burned area, where a footstep can sink six inches into ash or desiccated soil, has been a striking experience, Kuhn said. The ground is in prime condition for retaining prints from wildlife and has revealed a surprising amount of activity, contributing to a landscape that Kuhn called “beautiful, in this dark sort of way.”

“It somewhat has this gothic and desolate feel to it,” he said. “The post-fire shapes and forms you see can be quite astounding. You don’t really see that elsewhere.”