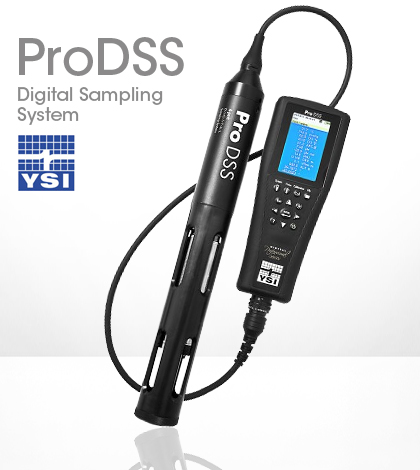 Because of its state-of-the-art features and rugged construction, YSI’s new ProDSS handheld is one of the most advanced instruments available for water quality spot sampling and profiling studies on the market today.

YSI launched the new ProDSS handheld in fall 2014 and it is a major leap for meter technology, with enhancements including an auto-corrected depth measurement, integrated GPS, color display and a long-life rechargeable lithium-ion battery.

The ProDSS is capable of measuring dissolved oxygen with an optical-based sensor, turbidity, depth, pH, ORP, temperature, conductivity, ammonium, nitrate, and chloride plus other calculated parameters such was water density, salinity, TDS and TSS. The cable, which comes with or without a depth sensor, has a universal port design that supports any four sensors. The ProDSS recognizes the digital sensors when installed and automatically displays them on the screen for quick instrument startup.

“We are excited to be able to offer our standard sensor payload: dissolved oxygen, pH, ORP, temperature and conductivity with the addition of depth and turbidity, both very valuable parameters to water quality studies,” said Laura St. Pierre, senior product manager of water quality systems at YSI. “We were able to do this while maintaining a small, easy-to-hold handheld and compact cable and sensor assembly, keeping true to a small, portable instrument.”

The compact ProDSS is ruggedized for field work and the driving force behind making it so robust was customer feedback. “Our customers put equipment through its paces in harsh applications and we want our instruments to be able to hold up to the rigors of field work and provide reliable data,” said St. Pierre.

Field testing to prove the handheld’s ruggedness has included submerging it for an hour and dragging it along a gravel road. All-titanium sensors, which feature EXO technology, made the cut. And the ProDSS also packs an IP67 rating and military-spec connectors. The ProDSS’ auto-corrected depth measurement is one that stands out. “We use the handheld’s barometer in real time to correct data in the depth sensor,” said St. Pierre. “So you don’t have to worry about vent tubing, desiccants or vented cabling to get accurate depth measurements.”

The option to integrate GPS makes the ProDSS more flexible for users with different application needs. It’s now possible for data to be mapped with KorDSS PC software, which is included with the instrument, St. Pierre says.

For data management, the ProDSS communicates with YSI’s KorDSS software via micro USB — an improvement over snap-on communication saddles. The micro port can also be used for charging the meter’s lithium-ion battery or for data transfer to a jump drive on the go.

Rounding out the ProDSS are features that reduce ownership costs, like LEMO sensor connectors and a classic Pro Series design. When maintenance needs arise, YSI offers a 3-year warranty for the meter. ProDSS cables are covered for 2 years, while most common sensors are warrantied for 12 months.