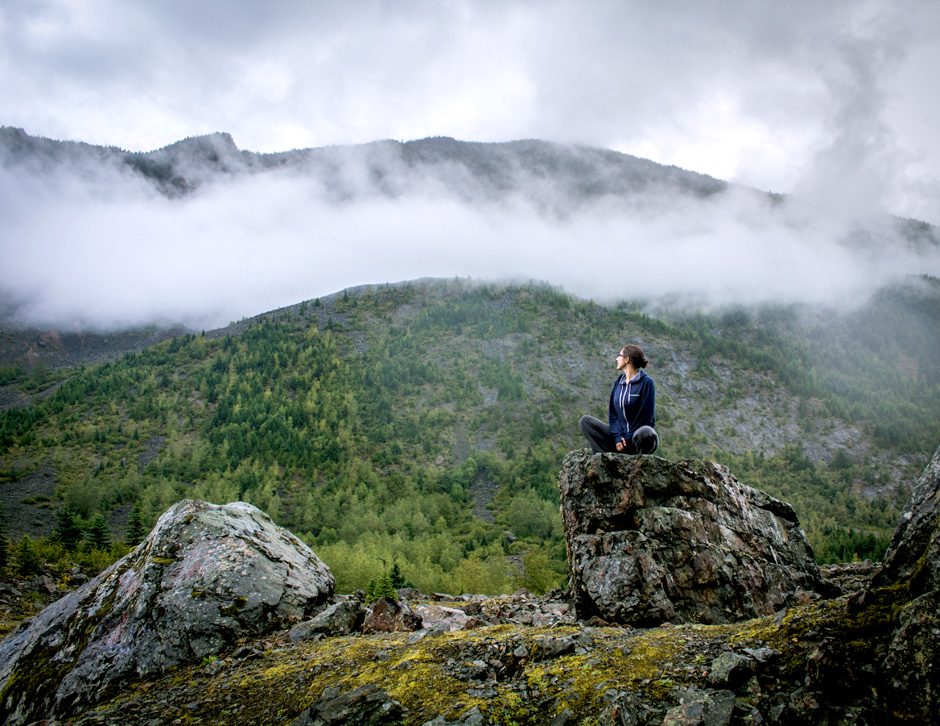 So much of what many field scientists and engineers do hinges upon their ability to communicate the value of their work. Communicating the value of science, generally, is part of that process—one that Mika McKinnon has down cold. We spoke with geophysicist Mika McKinnon about her work as a freelance scientist, and what it’s like to do work that touches on science communication in so many areas.

At first blush, what Mika McKinnon actually does might seem confusing.

“No, no, I swear, freelance scientist, real job,” quips Ms. McKinnon. “I often describe myself as having a non-linear career path. In grad school, I quit out of my research lab but didn’t actually quit out of school, and just kind of went into a holding pattern trying to figure out what was I going to do with my life.”

Feeling the throes of an existentialist crisis as a graduate student in the geosciences department, Ms. McKinnon realized she was less motivated by money, so mineral exploration or oil research work was not of interest to her.

The goal became to better understand how disasters happen, how people interact with disasters, and how to communicate that information to decision-makers in ways that help people. 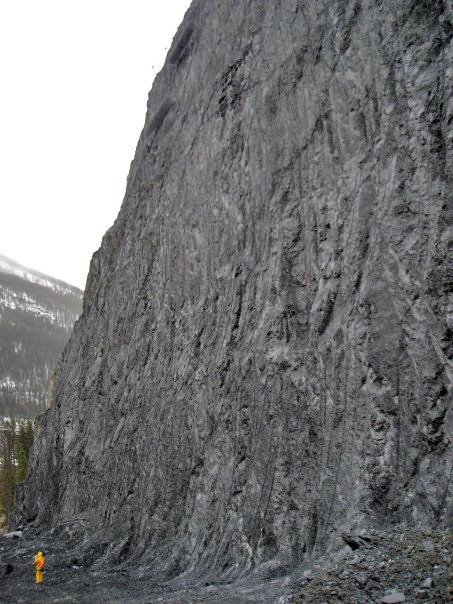 Fieldwork site where slope stability is being investigated. (Photo provided by Mika McKinnon)

“If I can do that, then I’ve made the world less bad,” remarks Ms. McKinnon. “Fewer people may die, and fewer people may be stressed out and unhappy. There is less damage. We are finding a way to survive on this planet, these tiny little fragile creatures in a giant, different hostile universe. Cool. That’s what I needed.”

“I tried to go into government work, but there was a huge hiring freeze on, and I got hired for 15 days a year,” Ms. McKinnon describes. “It’s awfully hard to do that much meaningful work or pay rent on 15 days a year. So I had to figure out other ways I could contribute to science with the skillset, knowledge, and expertise I have.”

“I figured out that if I can be curious and excited in public, I can give other people permission to be curious and excited in public,” remarks Ms. McKinnon. “Little tiny humans start off curious about everything. They have to learn what fingers and toes are; they need to figure out shadows. They have to learn about the entire universe. Unfortunately, often by the time they grow up, we’ve taught them to be embarrassed about curiosity, about saying, ‘I don’t know,’ or learning something new, or investigating something because they think they need more information to make a decision. We’ve taught them that at some point you’re done learning. But if I can still be curious and excited about finding out something new, it gives other people permission to continue to engage with that curiosity.” 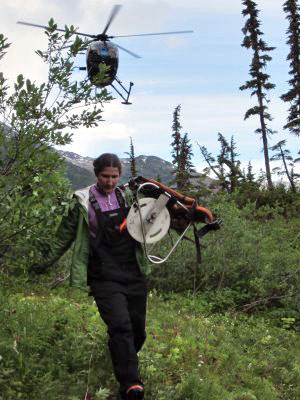 This is how Ms. McKinnon began doing applied communication work, and it is also the common thread with much of her film industry consulting work.

“I’ve been a government contractor for FEMA, the Federal Emergency Management Agency, where my job was to help them determine what science supports what actions during or before a disaster, and how to best teach Emergency Managers enough science to make better decisions—for example, things like a tsunami being more than one wave,” comments Ms. McKinnon. “And all of this comes back to that same idea of curiosity, and by doing that I developed an overlap of expertise of working with the Earth and doing hazard assessments—I never gave up my beloved landslides.”

When it comes to curiosity and excitement about science, few areas rival space exploration.

“I’m also working on space because it turns out everybody thinks space is exciting,” jokes Ms. McKinnon. “We all watch sci-fi. Star Trek is inspiring.”

In this area, Ms. McKinnon engages in a combined application of real-world or Earth-based positive assessment and space expertise.

“For example, when the European Space Agency’s (ESA’s) Rosetta mission 67P dropped the Philae lander it landed next to a cliff, legs in the air, and died,” states Ms. McKinnon. “We never want that to happen again, so we want to develop a package that we can put onto the robots that could help them determine where to safely locate their samples.” 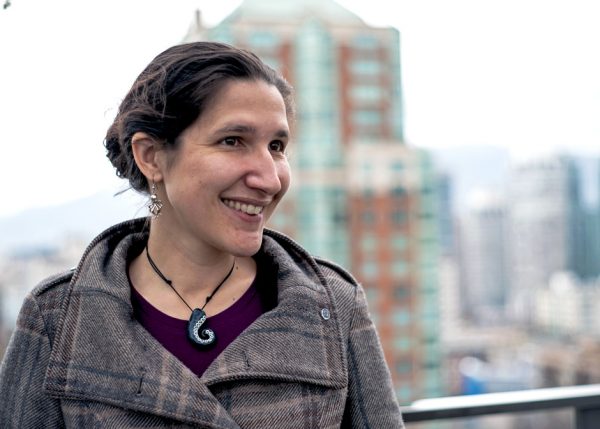 The NASA-funded project Ms. McKinnon is working on now, ESPRESSO, focuses on adapting terrestrial landslide models to be able to predict how they’re going to behave in their other environments in order to learn more about the physics of landslides on asteroids.

“This is on the edge of research, where we are now,” states Ms. McKinnon. “The bigger they are, the more oddly landslides behave. Really big landslides act more like a fluid than rocks and behave differently when they’re in motion than when they’re still. They are doing fundamentally different things, and they’re really difficult to sample, because what would you sample? The boulder, the tree trunks, the mud? And you’d have to sample it in situ, when it’s moving, which is a very difficult thing to do while keeping everybody alive.”

Instead, the team builds small sandbox experiments and attempts to make analogies between what happens in the experiments and what they observe in real life—bringing the lessons of field science to space, in some sense.

“Pretty soon we’re going to be loading a sandbox into a vacuum chamber on an aircraft to create a microgravity environment, and suddenly I’ll be able to do sandbox experiments to see how they would actually behave on an asteroid,” comments Ms. McKinnon. “If I know how the little sandboxes on Earth are akin to the great big, huge ones on Earth, and I know how little, tiny sandboxes on asteroids behave, then hopefully, I can predict how huge landslides on asteroids should behave.”

The ability to make these kinds of connections matters to anything from mining ventures to space exploration.

“Why are Earth and Venus so different from each other, when in terms of how we evaluate exoplanets they’re both inside the habitability zone?” Ms. McKinnon queries. “If we were looking at this solar system from far away, we’d say, ‘Oh, both those planets, same deal.’ And yet they are so dramatically different.”

“I had an episode in Stargate Universe where they wanted to have a big pulsar kill everybody every 22 minutes: pulse, pulse, pulse, death, death, death,” relates Ms. McKinnon. “But pulsars rotate on milliseconds. They’re lighthouses of death, but very, very fast—much, much, faster. If you try and slow them down, the electromagnetic field also weakens, until you get to the point where it’s about as deadly as holding magnets and doing cartwheels. Yes, there’s an electromagnetic field, but nobody is going to notice at all, much less die.”

Ms. McKinnon’s idea was to reach out into the broader universe and theorize. 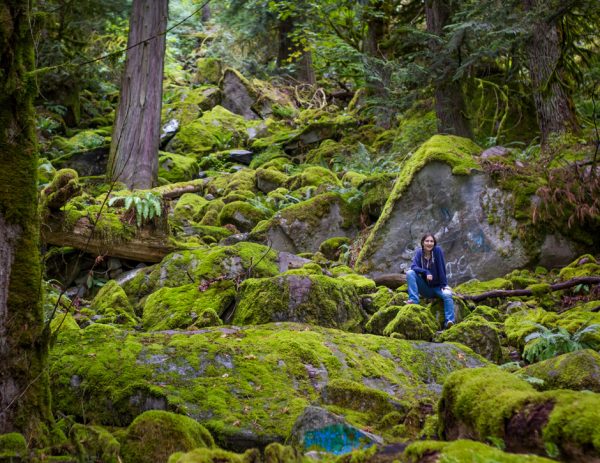 Mika in a forest landscape. (Photo provided by Mika McKinnon)

“I thought, ‘I’m not really seeing anything like this in any solar systems we’ve found—so far. But there’s no reason we can’t do this. Let’s have a starving pulsar with a feeder star in a binary system where the feeder star come just close enough every 22 minutes for the pulsar to rip off gas and plasma from it. It then goes across the boundary between being quiescent and active, goes pulse, pulse, pulse, kills everybody, and that feeder star goes zipping back out of reach again. The pulsar uses up its tiny bit of gas and plasma and it goes quiet again. We’ve never seen anything like it, but it’s plausible,’” details Ms. McKinnon. “Three years later, astronomers found a system that behaves that way. So we got to play with it in sci-fi before we saw it in real life.”

“I did ‘No Tomorrow,’ a romantic comedy on Netflix about the end of the world with amazingly accurate asteroid deflection techniques,” details Ms. McKinnon. “You could have taken screenshots or clips from this and used them as homework assignments in a grad-level asteroid deflection class.”

Including an accurate asteroid deflection in a romantic comedy may seem less necessary than it does for a sci-fi audience, but Ms. McKinnon sees value in it.

“A lot of people say things like, ‘I don’t like math,’ or ‘I’m not good at science,’ or ‘I hate school,’” remarks Ms. McKinnon. “Those are popular sentiments, but people enjoy stories. In fact, most of how we learn is through stories. So if you can have plausible, good science in entertainment, not only does it support the story by creating a more plausible worldview that doesn’t break our suspension of disbelief, but it also acts as a form of subversive education, where people can learn through the stories they consume.”