A River Runs Through It: Bob and Mary Neher Field Station in Montana Offers A Blue Ribbon River and Much More 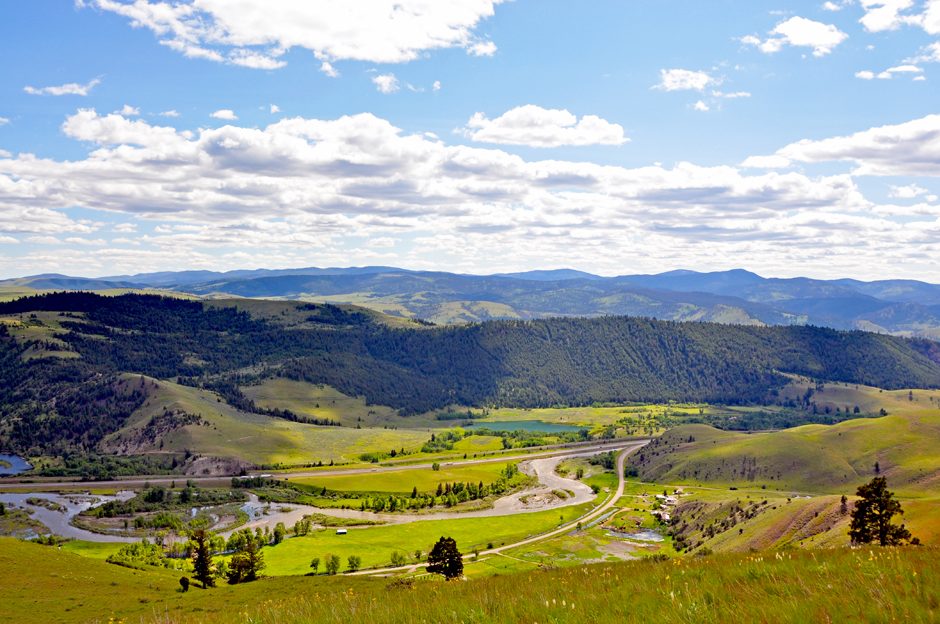 Pablo Weaver, Assistant Professor of Biology at the University of La Verne in California and Director of the Bob and Mary Neher Montana Research Station, could win a prize. “If they gave out a prize for farthest driving distance from your university office to your biological field station, I’d definitely have that one clinched,” says Weaver, laughing. From La Verne to the field station is a 16-hour drive, about 1,100 miles. “People ask why we have an interest in a field station that’s so far away from our university base. The answer is really pretty simple: it’s a world away from our university, with its own unique environment and culture. It allows our students to experience something completely different from our southern California college campus. They really get out in the wild and immerse themselves in the science.”

Students have always been integral to the field station. “In fact, Bob Neher built the field station with the help of university students,” says Weaver. The field station was created 25 years ago by Bob Neher to provide research opportunities for students. It is a 187-acre facility. Currently, the Bob and Mary Neher Field Station is most active in the summer, when undergraduate students arrive to do research, often to complete requirements for their capstone thesis projects. “All our majors do a capstone thesis project,” says Weaver. “We try to embed research into our courses at the university.” This summer there will be 16 undergraduate students at the field station: 3 chemistry majors and 13 biology majors. In addition to Weaver, there will be chemistry professors assisting with the summer field station teaching and research. 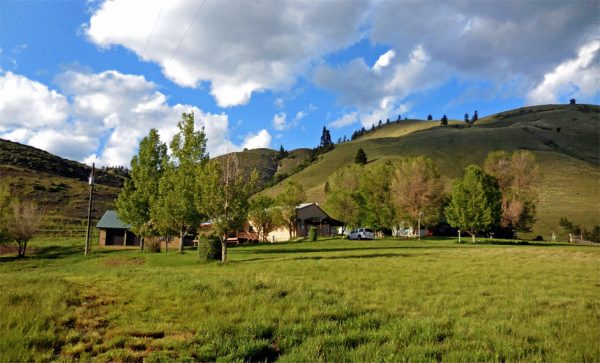 Heavy metal contamination is of special interest because the field station is located near the former copper mining towns of Butte and Anaconda. Area headwaters start in Butte and Anaconda then go to the Clark Fork River, which has several Superfund sites. “Silver Bow Creek and Warm Springs were historically heavily polluted due to the copper mine,” Weaver adds.

Anaconda also has other claims to fame. It has a manmade structure that is a big point of interest. Or rather, the tallest. “We have a historical smokestack here that is the tallest masonry structure in the world,” says Weaver. “At 585 feet, it’s taller than the Washington monument. Also, the movie ‘A River Runs Through It’ was filmed in the area and talks about the town of Anaconda and the politics of the time.”

While there is still some mining going on in Butte, Anaconda ceased smelting activities in the 1980s. In the 1990s, studies looked into the effects of mining contaminants on fish in the Clark Fork River. “There’s a large open pit mine in Butte that’s become a tourist attraction,” says Weaver. “It’s clear there’s still contamination. The water in there still has a noticeable greenish tint. The danger, of course, is that the open pit mine contaminants will flow into the groundwater. Ultimately, the goal is to revitalize Butte and Anaconda in the modern era. But first, it’s important to get a handle on what contaminants are in the soil and water and what the contamination levels are.” 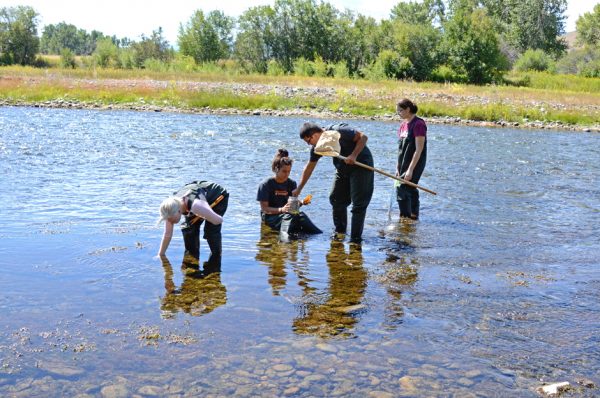 To this end, the undergraduate chemistry students will be looking at copper, cadmium, zinc and lead levels in the soil around the old mining operations for their summer work. The chemistry group has been looking at potential heavy metal contamination in surface soils and in bird feces.  The bird feces will give a sense of any metals making their way up the food web. The students are dissolving bird feces and soil samples in nitric acid for Atomic Absorption Spectrometer (AAS) analysis. The instrument used for AAS is a Shimadzu AA-7000. The analysis involves creating standard curves with known samples and comparing outputs with the environmental samples.

The undergraduate biology students, on the other hand, will be using kick nets, Surber samplers, and scrub brushes to evaluate the health of benthic systems in the area. They will be using the Hilsenhoff Biotic Tolerance Index to identify samples with a high degree of pollution-tolerant organisms and thus higher levels of mining contaminants. “Different insect genera have different pollution tolerances. We identify insects by genus. A lot of species diversity is a good sign. Not many species means the water health isn’t as good,” says Weaver. “So far, we have four years of baseline data we can use for comparisons.”

Weaver and the biology students will also be looking at the EPT Richness Index of field station waters, which can be expressed as the percentage of the sensitive orders (Ephemeroptera, Plecoptera and Tricoptera) to the number of chironomid taxa found. “The mayflies, stoneflies and caddisflies are not very tolerant of pollution, but the true flies, in particular, the Chironomidae, are much more tolerant,” Weaver explains. “The more diversity we see, the better.”

The Superfund sites on Clark Fork River have already undergone significant restoration. Wetlands were reintroduced in the early 2000s. Creek meandering was reintroduced, and Milltown reservoir was taken out. The dam was also removed.

“Samples are collected from the headwaters down to Missoula, which is about 250 kilometers,” Weaver mentions. Samples will be compared to those obtained at the reference site, which is at Rock Creek. “The waters of Rock Creek are pristine,” explains Weaver. “That’s the site where they filmed the fly fishing scenes from ‘A River Runs Through It.’ ”

While the students are not yet gathering pH, water temperature and other types of water chemistry data, there are plans to incorporate such data in the future. YSI multiprobe instruments are being used for gathering field data for teaching demonstration purposes and will soon be incorporated into student research. The field station is currently collecting weather data using an AcuRite 01036M model weather station.

“In terms of the insect diversity, it is interesting to note that the diversity has been good since we started collecting data in 2010, much different from the 1990s soon after smelting operations ceased,” Weaver observes. “We’ve been seeing good diversity in mayflies, and that’s been true for the stoneflies and caddisflies also.”

While there were still plenty of fish kills in the Clark Fork River in the 1990s, by the 2000s, the fish populations were making a comeback. “Today, we have healthy rainbow trout and brown trout populations, and fly fishermen come here on guided fish tours,” says Weaver. “Rock Creek has been designated as a Blue Ribbon fishery.” The Blue Ribbon designation is given by the U.S. government. It is only given to recreational fisheries of exceptionally high quality, based on their water quality and quantity, the water’s accessibility to the public, its natural reproduction capacity for fish, angling pressure and specific fish species it can support.

In addition to improvements in the fish populations due to restoration work, wetlands have returned to field station areas as well. Wetland birds such as kingfishers, flycatchers, red-winged and yellow-headed blackbirds are now commonplace, as well as birds of prey that hunt fish, such as ospreys and bald eagles. 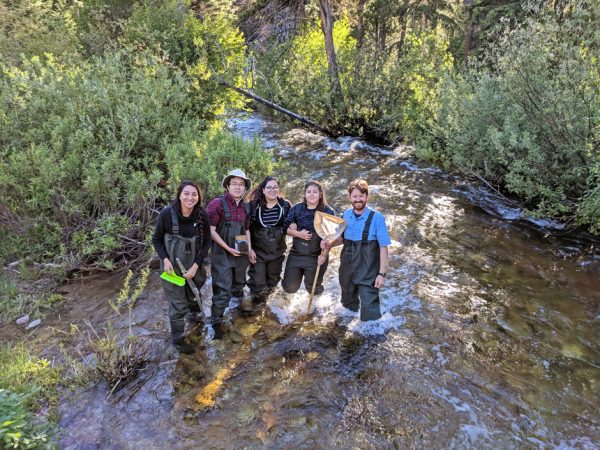 There have also been improvements in the Milltown Creek reservoir area. Trains full of contaminated river silt took the silt from the reservoir and deposited it near Anaconda. After the reservoir was drained, a free-flowing river was restored. Restoration work was done to put riparian vegetation back in its original locations before the reservoir was made. Restoration work has resulted in the return of native willows, cottonwoods and aspens. Elk, white-tailed deer and beavers have since returned to the site. “We also have river otters, coyotes, black bears and yellow-bellied marmots,” Weaver adds. Moose and bighorn sheep can also be found at Rock Creek.

In the future, Weaver and the other researchers would like to have programs at the field station year round. “One of the buildings is winterized, so we don’t have to limit ourselves to summer,” he says. “Most students are here for three weeks in the summer, though we have had a student stay here for two months doing a bluebird study.”

While Weaver enjoys many things about the Bob and Mary Neher Field Station, one of his favorites is the wildlife. “Montana has great mammal life. Our field station is also just four hours from Glacier and Yellowstone.”

Currently, Weaver is in the early stages of working on a bluebird paper. “I’m also looking for collaborations with more researchers and students. I’d like to get more students, teachers and researchers up here at our field station,” he emphasizes. “I encourage anyone interested in doing research to come and pay us a visit.”