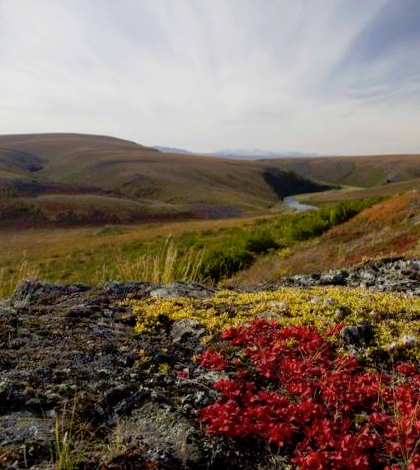 As the globe continues to warm, animals and plants have begun expanding into regions previously too cold and inhospitable for them. Northern regions are seeing more southern species slowly moving upward and changing ecosystems, becoming common in areas where they were once rarely seen.

Ken Tape, a research assistant professor at the Institute of Northern Engineering at University of Alaska, has tracked the migration northward of snowshoe hare and moose into Alaska’s North Slope using many pieces of evidence, most notably a large collection from repeat photography studies.

“Snowshoe hares weren’t seen on the North Slope until 1977. There were no moose here until 1930,” he says. “Climate warming has changed all that. The higher temperatures and thicker vegetation have brought them in. They have a solid presence where they once had none.”

Tape’s examination of the photographic and other data shows that Alaska’s North Slope is experiencing a snowmelt 3.4 days earlier each decade, as well as a longer growing season and a whopping 78 percent increase in shrub height. The shrubs serve as an important food source for both moose and hare, and the taller they are, the better they stick above Alaskan snow, allowing the animals to feed on them.

“Snowshoe hare and moose aren’t foragers that can dig for food. If the shrubs aren’t sticking above the snow, they won’t feed on them,” says Tape. “The fact that the shrubs are 78 percent taller gives both species a big boost.”

The shrubs are largely felt leaf willow species but there is one species of alder. The snowshoe hare and moose not only feed on the shrubs, but also use them for shelter. “The taller shrubs tend to be by the rivers, and that’s especially where moose gather. It’s not easy to hide if you’re a moose,” Tape chuckles. Tape compared photographs taken of the North Slope in 1950 to a collection taken in 2000. The 1950 study was an aerial photography study, and the 2000 study was also taken aerially, out of the door of a low-flying airplane. “Trying to match the places and timings of the 1950 photos was tricky, as you might imagine,” Tape says. Photos were taken of 20 rivers, and Tape looked over about 5,000 pictures.

Lynx, predators of the snowshoe hare, have also likely followed their prey into the North Slope, Tape says. Golden eagles and other hare predators may follow suit.

In addition to photographic evidence, temperature records of the North Slope were kept, as well as anecdotal evidence of people finding animal tracks. Trappers also kept detailed records of species they hunted and pelts they obtained. “The trapping information definitely indicated that lots of lynx are being trapped now in the Colville River area, for example, while they were rare or non-existent before,” Tape mentions.

The direct relationships among climate change, longer growing season and willow shrub height were not explicitly clear at first for U. of Alaska researchers. A key study for Tape and other scientists was a 1987 willow-height-versus-length-of-summer study by D. A. Walker at U. of Alaska. In that study, it was made clear that the longer growing season due to climate change had caused, over time, taller willows, which in turn made it possible for snowshoe hare and moose to survive the North Slope. It also was clear that the inland had a longer growing season than the coasts, resulting in taller inland willow shrubs.

“You could literally plug in the growing season length and average temperature data for the year you were interested in and you could figure out how tall the shrubs were in a given year. It was an excellent correlation,” Tape says.

Although they feed on the same shrubs, snowshoe hare and moose have distinct browsing patterns. “You could tell if it was a snowshoe hare by their characteristic bite, which cuts shrub branches cleanly as though with a knife,” Tape explains. Growing season length data and average snow measurements were also used in Tape’s study. The snow is the most difficult to measure of all, as in Alaska’s North Slope there is a windy environment, making measurement not entirely straightforward. Shrub height was measured using an average of the tallest 50 shrub plants.

“My investigation actually started with the 1880 to 1930 expeditions where people were colonizing the Arctic. I was looking for evidence of moose and didn’t see that until 1930,” Tape says. “If I could have one dream picture, it would be 1800 or 1850 of that area. I would really like to know what it looked like then.”

Interestingly, Tape says that a lack of wildlife in tundra regions tells you what the landscape looked like, just as their presence would. Lack of wildlife in this region means you know what the shrubs look like: They’re too short for grazing and the presence of shrub herbivores means the shrubs are tall. “In this way, we can use wildlife as a remote sensing device. Their presence reveals what the landscape looks like, as odd as that may sound,” says Tape.

Tape mentions an effort to recreate journeys others have taken in the area, such as in 1885 and Lt. Henry Allen, who traveled 5,000 miles and saw no moose. Others who have done segments of Allen’s journey counted 18 moose, a huge increase. “That suggests there’s been a moose explosion in the area from then until now,” Tape says.

Tape is not alone in his North Slope research. His team consists of 10 people, including wildlife biologists, moose experts, shrub experts, hydrologists, ecologists and a U. of Alaska master’s student.

“We also have a Museum exhibit that travels nationally. It is called ‘Then and Now’ and features some of our Alaskan North Slope repeat landscape photographs from 1950 to 2000,” Tape mentions. “It shows how much the Arctic has changed.”

Summarizing his experiences with the North Slope study, Tape says, “We found it was really neat that we could test predictions of future climate effects on the records we had of the past. We were able to find clear trends over time.”