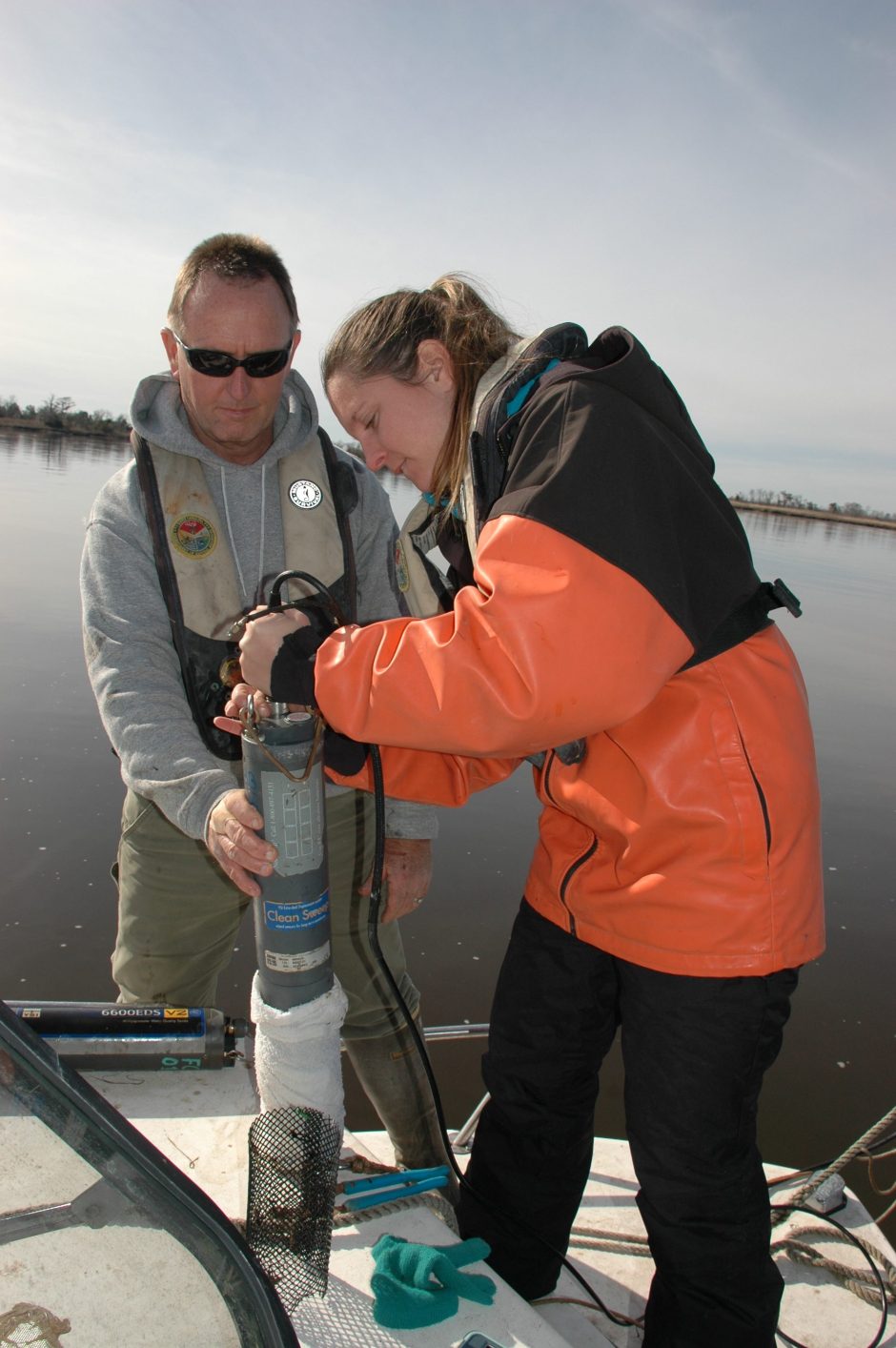 Norm Shea and Nicole Carey attaching the line and cable to a YSI 6600 water quality instrument at the Grove Plantation site. This site is instrumented with a Sutron Satlink 2 to transmit the data to CDMO. (Credit: SCDNR)

The Ashepoo, Combahee and Edisto Rivers (ACE) come together at St. Helena Sound, forming one of the largest undeveloped estuaries on the east coast.  The ACE Basin National Estuarine Research Reserve (ACE Basin NERR) is nearly 100,000 acre component of the larger ACE Basin system. The ACE Basin is located south of Charleston, South Carolina, and the area is internationally recognized for its uniqueness and charm. No other place on the planet has its distinctive blend of cypress swamps, oyster reefs, former rice fields and tidal marshes. Many rare and protected species make their home in the ACE Basin, including short-nosed sturgeon, wood storks, loggerhead sea turtles, horseshoe crabs and bald eagles. “I was attracted to the area because of its expanse and beauty,” says Denise Sanger, ACE Basin NERR research coordinator and manager of environmental research. A native of San Diego, a place with no shortage of natural beauty, Sanger nevertheless found herself drawn to the Lowcountry waters of South Carolina. “Where I lived before, there were only little pockets of intertidal salt marshes and tidal creeks. The ACE Basin has a huge abundance of these. It’s wonderful,” she says.

The ACE Basin NERR is managed by a partnership with the South Carolina Department of Natural Resources (SCDNR) and NOAA. Environmental monitoring at the ACE Basin NERR shares features with other NERR areas such as the System Wide Monitoring Program (SWMP) which includes meteorological monitoring, continuous water monitoring as well as regular water sample grabs. The ACE Basin organizes and distributes its data through the Centralized Data Management Office (CDMO). South Carolina DNR also has a marine research lab which is a contributor.

There are six water quality monitoring sites for ACE Basin NERR, four in the South Edisto River, two farther out. One of the sites has been moved, though some date back to 1995. The data gathering sites were originally chosen in the higher salinity zone based on potential human influence. “In 2015 we added two more sites to bracket the fresh to brackish water areas,” Sanger says.  This allows for a better understanding of the freshwater-saltwater zone which is important for studying sea level rise and freshwater inflow changes.  The spectrum of the area from low to high salinity is captured as well as possible.

The water monitoring is performed by a fleet of sondes, both the newer YSI EXO2 sondes and older YSI 6600 sondes. Data are collected every 15 minutes and includes pH, turbidity, salinity and dissolved oxygen. Water depth (tidal cycle) is also tracked, though it does not reflect true water depth. The St. Pierre site, a site closer to the ocean, was the first site selected for water monitoring. Its data are reported telemetrically. The Grove Plantation site, added in 2015 to provide brackish water data, also provides its data telemetrically.

Monthly water grabs are also taken every month at each of the four primary sites, which are at St. Pierre Creek, Edisto Island, Fishing Creek, and Mosquito Creek. Grab samples are analyzed for chlorophyll a, ammonia, nitrate, nitrite and orthophosphate concentrations. Inorganic nutrient data have been collected since about 2002.  Total nitrogen and total phosphorus are also included at Grove Plantation, Jehossee Island, St. Pierre and Edisto Island to provide additional information for coastal managers. The ISCO apparatus in St. Pierre takes data every two hours and four minutes over one complete lunar cycle or two tidal cycles, which lasts 24 hours and 50 minutes. The deployment mount at the St. Pierre site. The site is instrumented with a YSI EXO2 water quality instrument attached to a YSI Storm 3 Turnkey System to collect water quality data and transmit the data in near real time to http://cdmo.baruch.sc.edu/. The ISCO is also deployed at the site in this picture to collect water samples for nutrients and chlorophyll a. (Credit: SCDNR)

Like other NERRs, the ACE Basin NERR has a weather station that monitors air temperature, precipitation, relative humidity, wind speed and wind direction. The weather station is a Campbell Scientific and is located at the MacKenzie field station. All data is transferred telemetrically every 15 minutes. The data collection began in 2001.

Other environmental monitoring programs at ACE Basin NERR include the Sentinel Site Program, which refers to a site adjacent to Edisto Island, a high salinity site. There are six permanent vegetation monitoring transects that are monitored every fall and six Surface Elevation Table (SET) monitoring sites, which is done near the creek towards the end of each transect. These are monitored every quarter. There are also two other SET stations in Fishing Creek, where the water is of intermediate salinity.

These monitoring efforts support one of the research interests at ACE Basin which is a look at the concept of sea level rise and what that would mean for an area with former rice fields, salt marshes, oyster reefs and cypress swamps.

Other ACE Basin NERR efforts include our Living Shorelines Project which is focused on reducing shoreline erosion of the marsh. Historical efforts at SCDNR through a program called the S.C. Oyster Restoration and Enhancement (SCORE), for example, focused on deliberate creation of places oysters might like, encouraging them to build reefs, which in turn would boost oyster populations and create habitat. “We have created bagged oyster shell reefs where oyster larvae attach themselves to the bagged shells (larvae are called “spat”) and watched the marsh start filling in behind the oyster barrier.” Many volunteers help with the SCORE program, including students. The public has taken notice of the reduced erosion behind the SCORE reefs which prompted SCDNR to start a project to assess the reduction of erosion from bagged oyster shell, modified crab traps (oysters will also settle on wire mesh coated in concrete), and natural fibers such as Coir® logs made from coconut-based fiber and Curlex® made from aspen fiber.  They are sampled for a number of parameters to assess the erosion including using a Trimble R8 receiver system to measure elevation.

Since Sanger began working at the Basin in 2015, she has seen dramatic changes, even in only a couple years’ time. “In October 2015, we had what is called the 1,000 year flood, in other words, a big flood with a lot of impact that caused big salinity drops. In October 2016, we had Hurricane Matthew, which had a landfall near the Myrtle Beach area. We saw salinity drops similar to 2015. We were impacted by Hurricane Irma, too,” Sanger says. In January 2018 they have been impacted by the Bomb Cyclone, which dropped three to seven inches of snow on normally snow-free ACE Basin.  “The state shrimp fishery can be closed if the temperature drops for seven days under nine degrees Celsius which occurred this year,” says Sanger.  With the ACE Basin NERR long-term dataset we can begin to understand what is “normal” and how much of a departure from normal has occurred with these events. Denise Sanger collecting a grab sample for nutrients and chlorophyll a at the Mosquito Creek site. (Credit: SCDNR)

Sanger’s time at ACE Basin NERR has not been without surprises. “I was definitely surprised at how much freshwater we’ve had come in, so much that it significantly depressed salinity for months,” she says. “With too much salinity depression, you can affect the shrimp and you may get oyster die-offs.” Oysters may have been accustomed to high salinity, so they can be greatly impacted if there is a long time period of freshwater.

Despite some recent extreme weather events, the unique character of ACE Basin NERR continues to flourish. Roseate spoonbills, alligators, oysters, crabs and shrimp still thrill visitors of the Lowcountry salt marshes and Spanish moss-covered swamps of the Basin, a distinctly beautiful place unlike any other in the U.S. Environmental monitoring continues to help preserve and protect its rich diversity and unparalleled vistas.

Top image: Norm Shea and Nicole Carey attaching the line and cable to a YSI 6600 water quality instrument at the Grove Plantation site. This site is instrumented with a Sutron Satlink 2 to transmit the data to CDMO. (Credit: SCDNR)