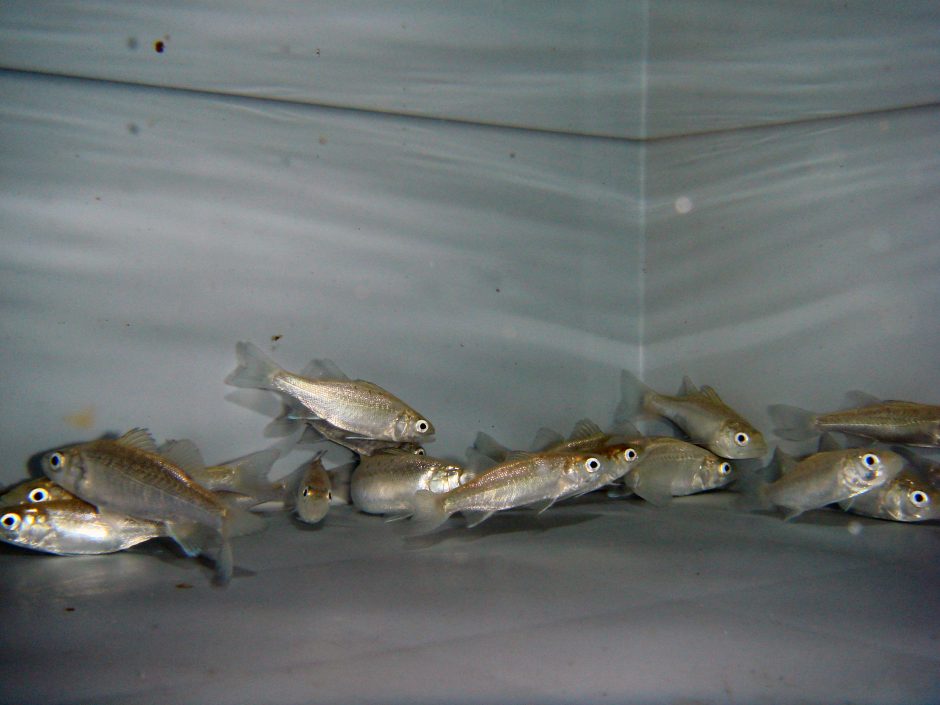 Well, not literally. But recent research proves that acidic oceans do impair olfaction in sea bass, and probably other fish—and that really does stink, for everyone.

Fish sniff out safe habitats, food, suitable spawning grounds and each other—and they also use their sense of smell to avoid predators. This means that reduced olfaction can threaten their survival.

Dr. Cosima Porteus of the University of Exeter, who led the study, discussed her recent research on this issue with EM.

“Ocean acidification has been shown to affect the behavior of many more fish species; however, no one really knew how an increase in carbon dioxide in the seawater affected the way that fish responded to different smells,” explains Dr. Porteus. “I thought that perhaps the change in ocean chemistry would affect how well fish smelled their environment and decided to test this.”

To do this, the team tested whether sea bass could detect different smells by exposing them to water with varying levels of acidity and CO2, recording their nervous system activity. The study reveals that sea bass, and probably other economically important species, will be negatively affected by the ocean acidification caused by elevated levels of CO2 in Earth’s atmosphere, leaving them less able to detect key scents and therefore vulnerable to predation, starvation, malnutrition, and are less likely to reproduce. 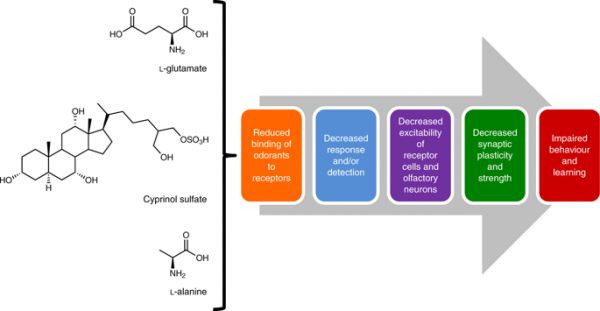 “We chose European sea bass to study because they are an economically important species, both for food consumption and as a sport fish,” details Dr. Porteus. “We think the ability to smell odors is similar in most if not all fish species, so all of the commercially important species—such as salmon, cod, plaice, turbot, lobster, crab, and haddock—are likely to react in a similar way, but it would be wise to confirm this with further studies.”

As levels of CO2 in the atmosphere rise, seawater absorbs the gas, causing carbonic acid to form. This, in turn, causes the pH of the water to drop. Oceanic CO2 has increased by 43 percent since the Industrial Revolution, and by the year 2100, scientists predict that it will be two and a half times higher than it is now.

To test how these changes will affect fish, Dr. Porteus and the team approached the problem in two stages.

“I exposed fish to either control seawater conditions, where air was bubbled in the seawater, or a high CO2 condition based on the level predicted by a business-as-usual model,” Dr. Porteus describes. “In the high CO2 condition I bubbled CO2 mixed with air into the seawater to raise the level of CO2; this also decreases the pH of the seawater as it would happen in the ocean. This was controlled by a pH computer that turned the CO2 on and off in order to maintain a stable pH.”

The CO2 was controlled in two large tanks. These larger tanks supplied several smaller tanks with either normal CO2 water or high CO2 water, and these smaller tanks became the test habitats for the sea bass. Sea bass were exposed to these conditions from 2 to 14 days.

Meanwhile, the behavior of the fish was monitored in a separate setup in which the seawater conditions matched those of the smaller exposure tanks.

“Sea bass were allowed to get used to these new tanks, and then their behavior was monitored using a camera mounted above the tank,” states Dr. Porteus. “I measured their behavior before and during a predator smell which was added to the water flowing in the tank. When I analyzed the videos I didn’t know which level of CO2 the fish I was observing was exposed to as to avoid any observer bias. I found that the longer they were in high CO2 the worse they fared.”

The team also recorded the nervous system activity of the fish while their noses were exposed to water with different levels of CO2 and acidity.

“I created the normal and high CO2 water as described above, and I then added different concentrations of a variety of odorants—ten odorants at 3 to 5 concentrations each—to either the control or high CO2 seawater tanks,” comments Dr. Porteus. “I anesthetized the fish to avoid causing them any pain, stress or discomfort. I recorded the olfactory nerve response by measuring the electrical activity of the nerve to these different odorants in the water that flowing over the nose of the fish in both normal and high CO2 seawater. The odorants tested were those that would be involved in finding food (amino acids) and in recognizing fish of the same or other species, such as intestinal fluid and bile and bile acids.” 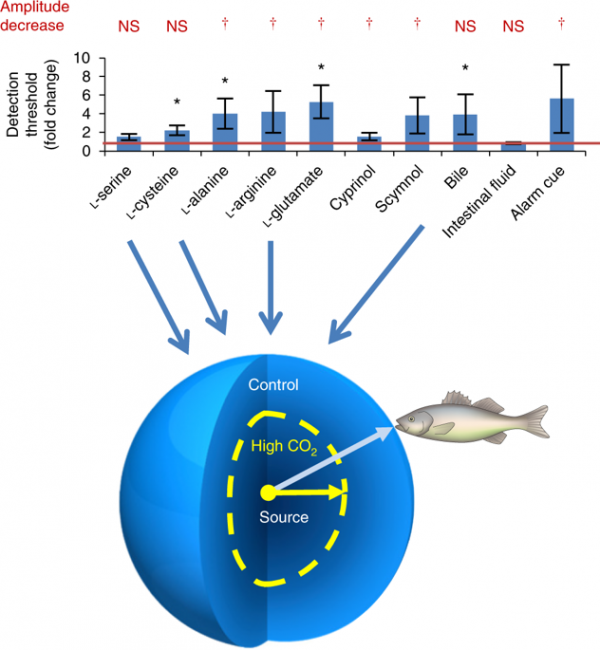 In short, the fish were less able to find food and good places to spawn. They were also less able to evade predators, and more likely to freeze at times when freezing is suboptimal—a sign of anxiety.

“Fish respond to a predator by either swimming away quickly (a fight-flight response) or freezing on the spot,” explains Dr. Proteus. “The freeze response is a passive defense strategy and relies on decreasing activity and remaining immobile to avoid detection. However, when fish freeze for no reason—such as when a predator or its smell is not around—it can indicate the fish is ‘on edge’ or anxious.”

BAU levels of acidification caused olfaction in the fish to drop by up to 50 percent. Their ability to detect and react to certain smells—such as those connected to food and threats—was affected more than for other odors.

“Animals have some ability to respond to a stressful condition by making more proteins or different proteins that work better under different conditions,” remarks Dr. Proteus. “One way to smell something more effectively is to have more receptors detecting that smell; that increases the chance of detecting that particular smell.”

Animals can also adapt to changing conditions by making a different receptor that can function more effectively under lower pH conditions; however, the researchers found no evidence that this was taking place.

In other words, increased acidification seems to prompt a cascade of olfaction problems for fish, each compounding the last. The team was able to determine whether the fish were able to compensate for higher CO2 conditions based on the presence of “active” or expressed genes by using high throughput sequencing technology in the form of an Illumina HighSeq 2500 to measure the hundreds of thousands of active genes in the fish under the different conditions, and compare which differed. 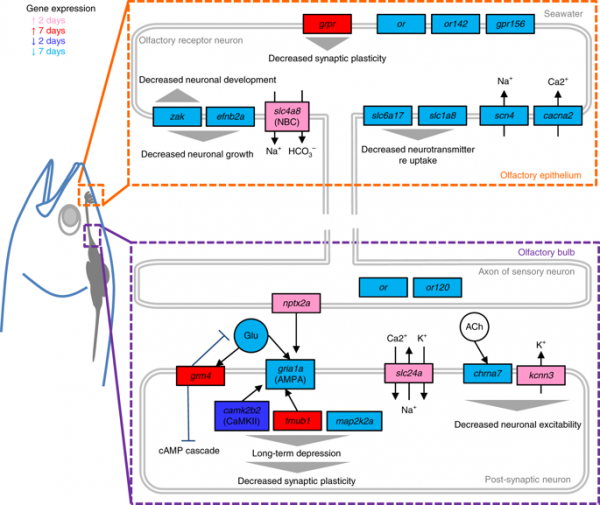 In any case, the adjustments that climate change will wreak in the planet’s oceans will happen too quickly—under any scenario—for evolutionary adaptations to occur in most species.

“These changes in CO2 are happening very quickly, and evolutionary adaptation takes many generations, so it’s more likely for shorter-lived species to be able to adapt to this rapid change,” states Dr. Porteus. “However, some individuals or species are able to respond to high CO2 conditions better than others, and therefore, not all fish might be affected to the same extent.”

For now, Dr. Porteus and the team hope readers will realize that ocean acidification won’t just be bad for fish.

The next steps for the researchers suggest both added concern and hope.

“We only compared the sense of smell of sea bass in current and future conditions, but it is possible that this is already a problem,” cautions Dr. Porteus. “Our next experiment will focus on determining whether marine fish are already being affected by comparing current levels of carbon dioxide in the ocean to pre-industrial levels. However, there is hope. Our study shows that future levels of CO2 can have these effects on the sense of smell of fish, but we can still do something about it—we can reduce carbon emissions now to prevent this from happening in the future.”