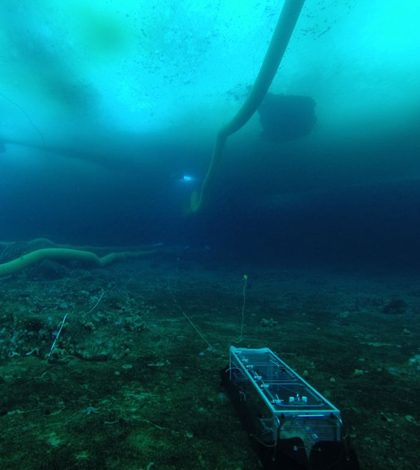 One of the experimental chambers in place on the seabed with a duct above it ready to be lowered and connected. (Credit: Glenn Johnstone / Australian Antarctic Division)

Free ocean carbon enrichment is a novel approach that few scientists have used in studies of ocean acidification. Their investigations have mostly been completed in easy-to-reach regions, however, which helps to make the Antarctic Free Ocean Carbon Enrichment (antFOCE) experiment all the more special.

In late 2014 and early 2015, a group of researchers led by the Australian Antarctic Division trekked to the Casey Station to complete the project. The eight-week experiment involved innovative contraptions to gauge the effects of acidic conditions on Antarctic ocean habitats, including 40-meter long ducts to lower pH in test chambers and a few SeapHOx sensor packages.

Each duct was lowered through a hole in sea ice and suspended from the underside of the ice by a system of rope lines lowered through small drill holes. Once suspended, divers used their communications system to coordinate lowering the ducts into place on the seafloor, around 12 to 14 meters deep, where each duct was attached to a chamber.

“Our largest, most challenging bits of underwater equipment are the 40-meter-long ducts, or ‘slinkies’ as we’ve nicknamed them,” researchers write in a blog post. “The team has devised an innovative method of suspending these … under the sea ice, before gently lowering them into place on the seabed. It’s been a great team effort to coordinate a task we’re pretty sure no one has ever tried before.”

The ducts linked up with four test chambers. Each was mounted on sediments in water under 2.6 meters of sea ice. Two were rigged to stay at ambient pH while another two were set to hold water at 0.4 pH below ambient levels. Another two sites under assessment were left without chambers. From there, investigators deployed other experiments while maintaining the antFOCE chambers. These included microscope slides to measure bacterial colonization, gels to gauge sedimentary chemistry change and light sensors that tracked intensity in and around the chambers. Cameras were also mounted on the top of each chamber to record time-lapse images of biological activity underway.

During the eight-week period, water from below the sea ice was drawn through a sea ice buoy, which researchers called “Smartie,” and enriched with carbon dioxide via bubbling.

“Once enriched with CO2, the water is pumped back down below the sea ice and added to the flow of ambient seawater in 40-meter-long ducting, where it mixes, before flowing through the experimental chambers,” writes Glenn Johnstone, antFOCE project manager, in a blog post.

Mini chambers were also used to study the rates of photosynthesis in single-celled algae living on the seafloor and the respiration rates of large creatures such as Abatus sea urchins. A few SeapHOx sensor packages were also deployed to gather measurements of temperature, salinity, pH and dissolved oxygen around the four main chambers autonomously.

“All of that information is incredibly useful in determining what physical and biological changes are occurring in the water,” writes Nick Roden, antFOCE carbonate chemist, in the blog.

All the gear performed to its specs, researchers say, but not without challenges from the extreme and complex environment. For most of the 8-week period, pH levels held where they needed to.

“Occasional power failures and other technical difficulties saw the pH revert to background for short intervals during the experiment, increasing the variability of the pH treatment,” investigators write in a research summary posted in May 2016.

In the summary, authors note that it is too early to describe the full effects of the acidification experiment. But preliminary results indicate a potentially large range of changes occurred in the ecosystem.

Top image: One of the experimental chambers in place on the seabed with a duct above it ready to be lowered and connected. (Credit: Glenn Johnstone / Australian Antarctic Division)