Acidification May Ease Struggle to Survive for Herring Larvae 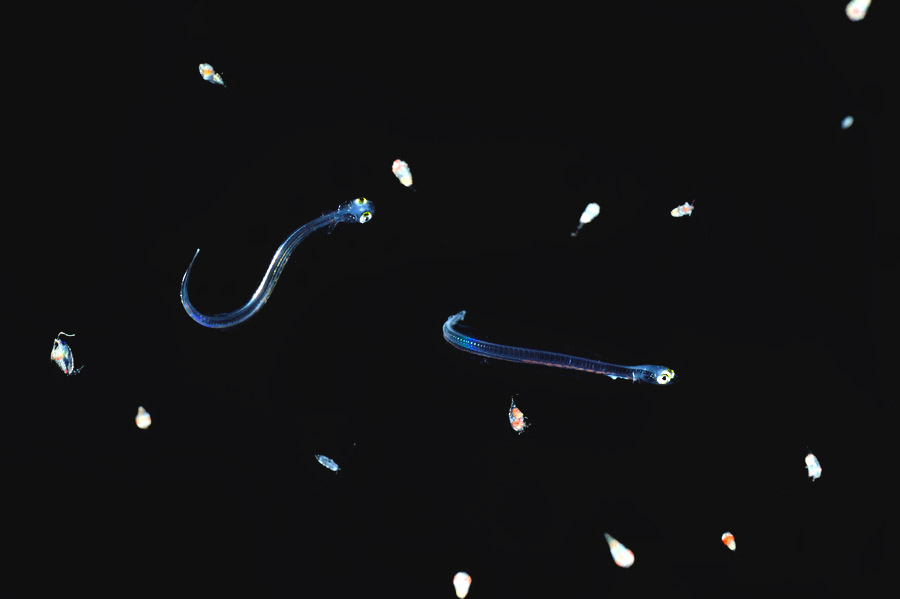 Herring larvae along with copepods, which belong to the zooplankton. (Credit: Solvin Zankl)

Survival in the ocean is no easy task, especially for ichthyoplankton, the eggs and larvae of fish. For most, including herring larvae, once they’re released into the water, they’re on their own, with survival as their sole goal. Climate change is making that goal more difficult to obtain for many species, but the changes to the marine atmosphere that come along with a warming climate are complex, and they affect various species in different ways. Scientists are still trying to research what some of those differences might look like.

Ichthyoplankton are vulnerable to predators, of course, but they are also highly sensitive to their environment. This means changes in dissolved oxygen levels, temperature, and pH can all be dangerous to fish eggs and larvae. As rising levels of atmospheric CO2 cause the world’s oceans to become more acidic, fish larvae are going to face new challenges. New research from the GEOMAR Helmholtz Centre for Ocean Research Kiel explores how ocean acidification might affect the growth and survival of herring larvae—and revealed some surprising conclusions. Dr. Michael Sswat from GEOMAR, the study’s lead author, corresponded with EM about the research.

“Fish in general is one of the major human food sources, thus effects on fish from anthropogenic changes should be assessed,” states Sswat. “Fish larvae are considered the bottleneck in fish populations as it is the most vulnerable life stage, for abiotic changes but also biotic such as predation and prey availability.”

In addition, because fish larvae have yet to develop gills—the primary organ for acid-base regulation in fish—scientists think fish larvae are most sensitive to ocean acidification (OA). However, although some studies have been conducted in this area, the results are not totally clear.

“Several earlier studies showed effects of OA/CO2 on different fish species; most were negatively affected, but there were also some which showed no effects,” Sswat explains. “The research group of Catriona Clemmesen of GEOMAR, who is one of the co-authors on this study, focused on direct effects of elevated CO2 on larvae of Atlantic cod and herring in earlier studies. They found both for cod and herring larvae tissue damages and effects on growth. But these studies were performed at higher CO2 levels than in our studies—1800 and 3600 µatm compared to ~800 to 900 µatm pCO2. For herring the effect of ‘end-of-the-century’ CO2 levels of ~1000µatm had yet to be studied. We were interested to see what the effects would be on herring larvae performance in a more ‘realistic’ scenario where both direct physiological effects and indirect effects via the plankton community would be accounted for.” 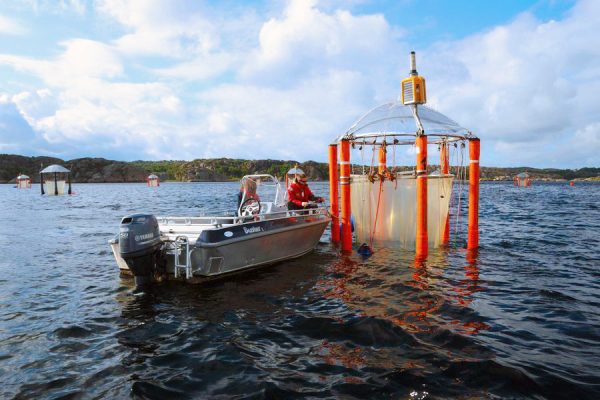 The scientists tested the response of young herring to ocean acidification by rearing them in a complete food web under present and future CO2 conditions in the KOSMOS mesocosms (Credit: Maike Nicolai [CC BY 4.0])

The team decided to test how herring larvae would respond to these “realistic” end-of-century conditions using Kiel KOSMOS pelagic mesocosms to create complete food webs within both present and future CO2 conditions—five of each. There are several benefits to using these giant, anchored tubes.

“The KOSMOS includes a high volume of seawater, 55,000 liters, with all of the pelagic organisms naturally occurring in the community limited to those less than 3mm in size, as bigger organisms may have a patchy distribution and would potentially have an uncontrollable effect on the community,” describes Sswat. “The wall of the KOSMOS is made from transparent PU foil, so the community experiences natural light conditions. The same is true for the temperature, as heat exchange is possible. Last, the mesocosms can be deployed everywhere in the ocean, so you can study different communities/ecosystems.”

Higher levels of CO2 corresponded with more intense algal blooms; this in turn allowed zooplankton to thrive, giving the herring larvae plenty of food and a better chance of surviving. In fact, under the higher CO2 conditions, the survival rate for herring larvae was almost 20 percent higher.

However, even though these particular changes to the water did benefit herring larvae, it is possible that other changes such as loss of biodiversity and longer term changes in the food web might harm them.

“We can only say that in this case, herring larvae benefitted from the increased food supply under OA; I expect that the effect is not always positive in all communities or ecosystems,” remarks Sswat. “For example, if certain keystone species are negatively affected, the whole community may be changed. Increased temperature or decreased oxygen in combination with OA may also negatively affect fish larvae. So, to put it plainly, herring larvae can only benefit when they are not directly—physiologically—impacted negatively, and at the same time if their prey organisms are available in higher numbers than before.”

Why should herring larvae tolerate more CO2 at all? Possibly because herring spawn near the ground anyway, where there are typically higher CO2 levels naturally. Compared to species used to spawning near the surface, herring might therefore be better suited to higher CO2 levels. Still, both indirect and direct CO2 effects have the potential to be harmful, and the situation is complex, even for the relatively sturdy herring larvae.

“With respect to ocean acidification, herring may benefit whenever there is no direct effect of CO2 on them, so when pCO2 stays below ~1000 µatm,” details Sswat. “For higher CO2 levels we cannot say yet, as for example at > 1800 µatm negative effects such as tissue damages in organs were found. If there is no direct CO2 effect then herring will probably react to the indirect effects via the food web, which could be negative, unchanged or positive. If there is a direct negative effect for example on dominant phytoplankton species or on the herring larvae prey, such as copepods, this may also indirectly affect species at higher trophic levels.” 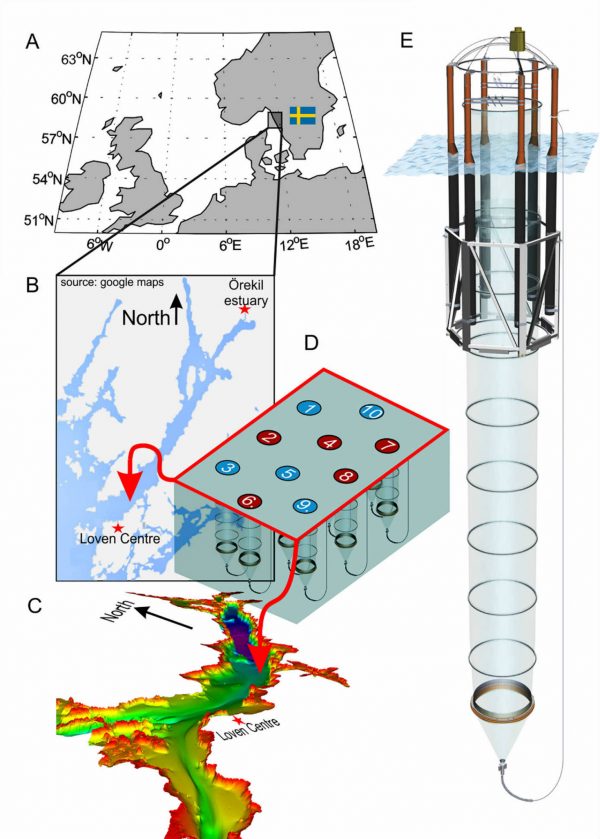 Study site and mesocosm deployment. (A) Map of north-western Europe. The small black square marks the study site off the Swedish west coast. (B) Close-up on the Gullmar Fjord region. (C) Bathymetric map of Gullmar Fjord. The mesocosm deployment site was on the inner edge of the sill, close to the fjord mouth (marked on (B) and (C) by the red arrows). (D) Arrangement of the 10 mesocosms at deployment site. Small numbers inside the circles show mesocosm arrangement (M1-M10) whereas blue and red represent ambient and high CO2 replicates, respectively. (E) Schematic drawing of a mesocosm unit. The floatation frame is 8 m high. The bag without sediment trap extends 17 m below sea surface and has a diameter of 2 m. The sediment trap is attached to the bag with a flange ring and reaches down to 19 m water depth. (Credit: Bach et al.)

Add to this complexity the need to understand how rising CO2 and falling pH affect every species in a local ecosystem, and the impossibly complicated reality of predicting accurately becomes clearer.

“There may also be effects on competitors or predators of herring larvae, such as jellyfish, which are not studied yet to that extent to give a meaningful answer,” cautions Sswat. “But still, I would expect that if competitors/predators of herring larvae are positively affected by OA, herring larvae will then be indirectly negatively affected. This will need further research in the future. It becomes even more difficult when considering negative direct effects on the larvae and positive indirect effects via the food web; can these positive effects mitigate the negative direct effects?”

This is partially why the team wanted to tease out the direct effects of acidification on the herring larvae from the indirect influence they experienced as part of the food chain.

“In the mesocosms you possibly could have both the direct physiological CO2 effect on the fish larvae as well as the indirect CO2 effect via the food web,” remarks Sswat. “The result in the end is, that more herring survived in the elevated CO2 mesocosms in the end. Only with the information from the lab experiment, that herring larvae are tolerant to these CO2 levels, we could exclude the direct CO2 effect on herring in the mesocosms which leaves only the indirect food web effect of CO2 as an explanation.”

What comes next in this line of research for Sswat and the team? More direct and indirect effects of CO2 on more species.

“From my point of view, future studies should focus on testing the indirect effect of CO2 in different plankton communities to discover whether there can also be a negative indirect effect when certain keystone species are negatively directly affected by CO2, for example,” explains Sswat. “Testing whether the direct negative CO2 effect for CO2 sensitive fish larvae such as cod larvae can be mitigated by increased food supply; and also testing the CO2 effect on competitors and predators of fish larvae, to see if there could be positive or negative indirect effects of CO2 from competition or predation can be expected.”

In the ocean of our shared warmer future, Sswat identifies the coming challenge as not just OA or increased temperature alone, but both of these factors along with decreased oxygen.

“Studies including multiple factors are needed to see how these effects interact; for example, in the case of cod larvae, would the effect of OA be even more negative under increased temperatures or decreased oxygen?” adds Sswat.

For now, the team is working to answer more questions about different species will fare under the many different changing conditions our warming climate is bringing with it.

“We have more analyses still ongoing for mesocosm experiments on OA which followed this study, so there will definitely be more exciting results coming up soon,” promises Sswat.