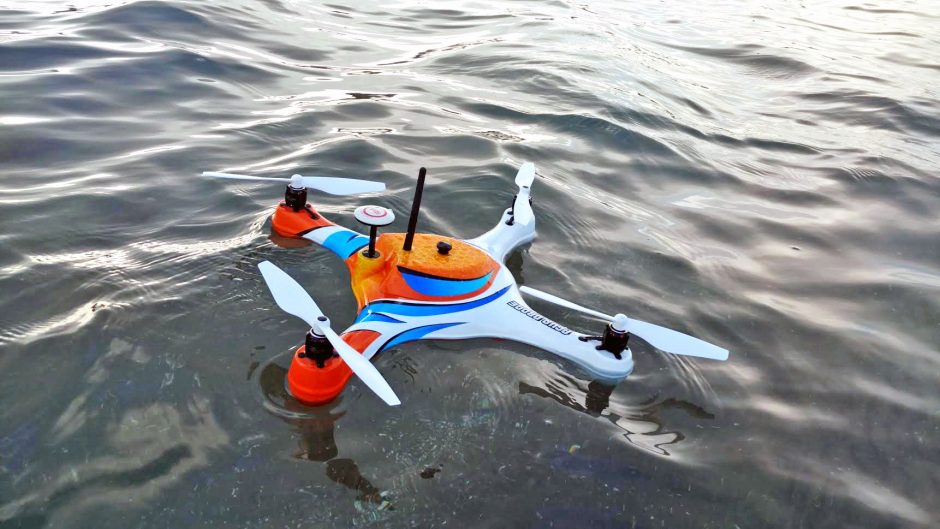 Since then, Marion has been contacted by Shark Tank, Make Me A Millionaire Inventor and Discovery Daily Planet in Canada. “Everyone’s been calling me!” Marion laughs. Not only people who fish but also researchers, including marine biologists and others who spend their lives delving into the inner workings of fish and other aquatic life. Harbor Branch in Florida, a biological field station that was the subject of a previous Environmental Monitor article, is just one of the research facilities that has been in touch with Marion. “My idea for their facility is to use our waterproof drone system to look at red tides and other Harmful Algal Bloom (HAB) aspects,” Marion says. “Their problem was that they wanted to gather samples near the shore, but using their current methods, they couldn’t get samples beyond a certain distance. Our drone system allows them to do that safely and efficiently.” 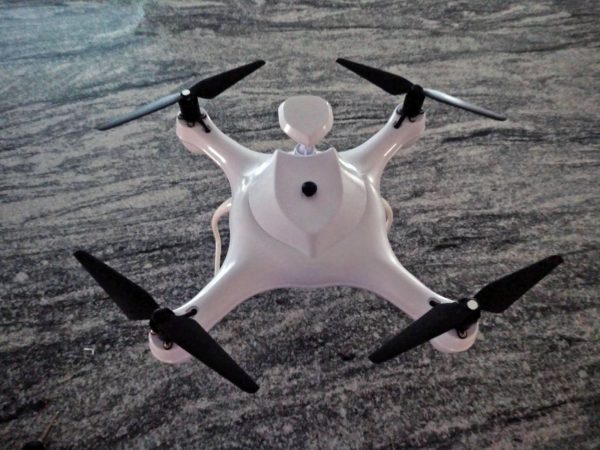 Shown here is the end-product which will be available for consumers. (Credit: Dan Marion)

The AguaDrone system uses two eight-ounce sampling bottles attached to the drone with a harness. “You can send the drone out with bottles attached to the bottom, lower it in the body of water you want to sample, and the drone will pick up the samples and bring them back to you without spilling them,” says Marion. “There are special grooves on top by the lids which enable the bottles to attach. We do need eight inches of clearance to land the drone with samples properly, without spillage. That is so the landing gear can deploy correctly.”

The AguaDrone can use several pod attachments for various purposes. There’s a pod for gathering water samples, a pod that acts as a wireless fish finder and a pod that helps someone fishing to cast with more precision, to name a few. “Our pods are unique and we have patents and patents pending for them. Also for the bottle harness,” Marion adds. The drone weighs about 4 pounds, 1 pound of which is the pod or sample bottles when filled with water. 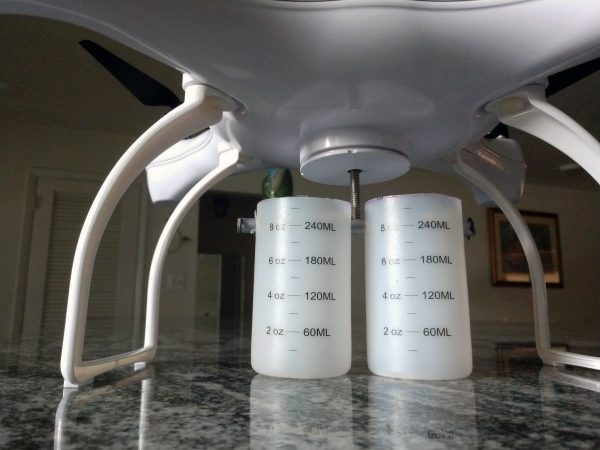 One of the pods has probes to measure typical water parameters of interest such as dissolved oxygen, salinity, pH and dissolved solids. “That pod unit was made in house, including the probes,” says Marion.

AguaDrone has the first and only system with a wireless sonar pod that sends a wireless signal to a smartphone or tablet, turning the AguaDrone into a fish finder. “It’s a patented system which gives water temperature, depth, underwater structure information and fish marking,” Marion explains.

The AguaDrone can also be used to drop bait with more precision, raising chances of a good target strike. The bait pod is a payload release pod operated with a remote control. It utilizes a pin that slides in and out, allowing precise control of the amount of bait line above or below the water. It will then release the bait in the precise place needed. The pod is used to assist in positioning bait, but the drone itself is not used directly for fishing. Drone fishing is not legal unless the bait is attached to a release clip that will give way if the fish bites…otherwise, the situation is viewed as “unfair” for the fish and is not permitted. 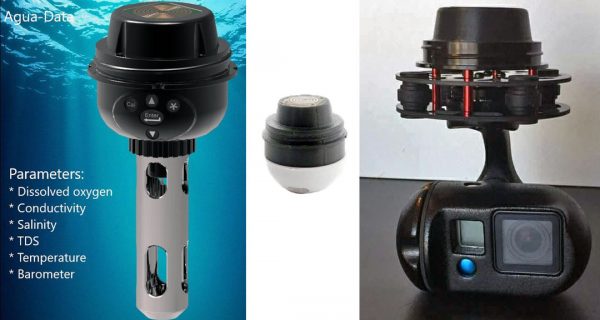 “It’s interesting to note that fish aren’t bothered by the sound of the drone,” says Marion. “It doesn’t scare them off or agitate them.” Some animals, such as bears, become clearly unsettled by drone noise. Others, like seagulls, may strike drones, mistaking them for other birds.

Besides fishing, there are other AguaDrone applications which Marion views as having great potential. “A hydrophone pod could be really useful for marine researchers. They could use it to listen to dolphins and whale songs. We are in the works to develop such a pod.” Another application Marion mentions that an AguaDrone hydrophone pod could be used for is the oil industry. “On an oil rig, a technique they use is listening to the rig structure. They can actually tell by the sounds it makes if it is developing a structural problem, like if it’s starting to crack in an area,” he explains.

AguaDrone could even help lifeguards. “We could make the drone emit ultrasonic sounds, which have been proven to drive away sharks,” Marion points out. “With a drone making ultrasonic sounds, you could move the sound in such a way to direct sharks away from people swimming.” The drone system could possibly help to tag sharks also.

While AguaDrone has many possibilities, there are a few restrictions on the technology. “When you’re operating a drone, it must stay in your line of sight,” Marion says. “That’s about 3 to 5 miles. You also can’t go over 400 feet off the ground. You also can’t fly in national parks or nature reserves. You have to follow rules set by the FAA.”

While the AguaDrone company has done its best to contribute to the latest and greatest in underwater drone technology, they have also contributed to marine research efforts in other ways. 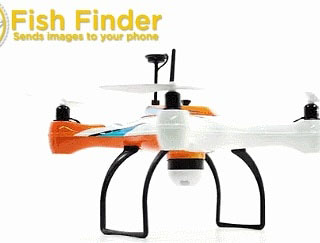 This orange and white version is an old prototype used in a few TV shows. (Credit: Dan Marion)

“We donated aftermarket GoPro cameras to the Harbor Branch facility as we were upgrading to the next generation GoPros. They really appreciated getting the cameras, and we were happy they would be put to good use,” Marion recalls. AguaDrone has also made donations to other marine research centers as well, a total of 300 cameras.

In the future, AguaDrone plans to continue focusing on marine research. “We want to be part of the solution for collecting data on HAB,” says Marion. “There are all sorts of other interesting applications we have been involved in as well. For example, there is a project where our drone is used to identify jellyfish clogging up the turbines of power plants. They clog up water intakes for generators and the generators overheat. Who would have thought? I honestly am hearing of new ways people might use AguaDrone all the time.”

The AguaDrone company has six principal members, specialists in electrical engineering. A few of them were formerly employed at 3D Robotics. One is a helicopter pilot. Most are members of the U.S. Army and Marion’s son acts as the COO.