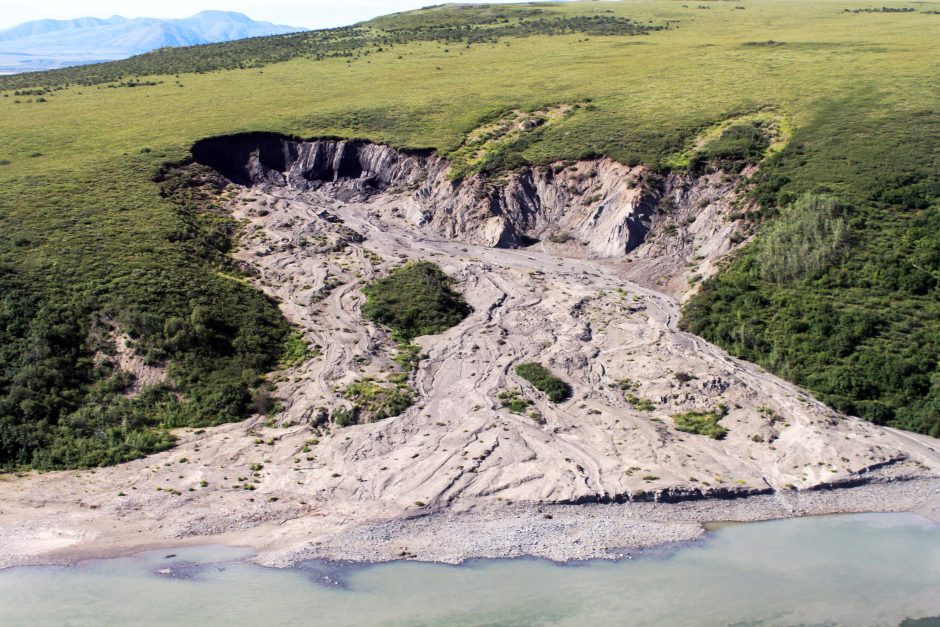 More than 250 million years ago, massive volcanic activity in the region of what is now Siberia caused “The Great Dying,” a colorful name for the Permian mass extinction that wiped out most of the life on Earth at the time. Once the volcanic activity finally calmed down after a respectable one million years, about 96 percent of life in the ocean and 80 percent of life on land was gone. About 500 gigatons of carbon were left behind in that region, and as the Earth cooled, that carbon was sealed in the Permafrost that covers much of Siberia today.

Permafrost is simply ground that stays frozen at or below 0° Celsius (32° Fahrenheit) all of the time. It does not necessarily contain ice; as long as it remains frozen solid, even completely dry ground is permafrost. And, as you might expect, when permafrost starts to warm up enough, it thaws, releasing whatever nutrients and compounds are locked inside it—including carbon. As carbon enters bodies of water in Arctic and subarctic regions, it is triggering browning, as new research shows.

Browning itself is nothing new; various researchers have found the phenomenon in a range of lakes around the world, and the problem appears to be worsening as our climate changes. Because permafrost holds Earth’s largest stores of organic carbon and is beginning to thaw as our climate warms, the release of these carbon stores as greenhouse gases in the atmosphere is a real concern. However, the effects of thawing permafrost on freshwaters in Arctic and subarctic regions have received little study, until now.

The findings in this study are unique in that they highlight the ways that thawing permafrost influences the biogeochemistry of surface waters with carbon, increasing the water’s ability to absorb sunlight. The end result of the change is more stratified, darker ecosystems housing altered biological processes. “Initially, this study was supposed to be performed only in several sites very close to Kuujjuarapik-Whapmagoostui, a small Inuit and Cree village in Nunavik, Quebec,” explains Wauthy. “We sampled water from some ponds with different levels of exposition to permafrost thaw, in order to highlight its impact on dissolved organic matter (DOM) by optical and stable isotope analyses. So, the study was initially focused on a very small region in Subarctic Quebec.”

Eventually, however, the team took biological, chemical, isotopic, and optical measurements of hundreds of samples taken from 14 Arctic and subarctic regions between Russia and Alaska to Russia.

“We just added 13 regions from which we found usable optical data for own study,” details Wauthy. “Thereby, we were able to gather optical data from 253 ponds, sampled between 2002 to 2016. Then, we divided all these ponds into three categories according to their catchment characteristics and exposure to permafrost thaw.”

However, the more innovative technique to highlight in this research was the team’s use of stable isotope analysis (SIA) to investigate DOM.

“For several decades, SIA has been used in biology to investigate the structure of food webs,” remarks Wauthy. “Here, we’ve adapted the technique in order to focus on DOM. To my knowledge, it was the first time that stable isotopes were used in that way.”

It quickly became apparent to the team that thawing permafrost causes higher levels of organic matter to end up in the water. Although there was notable variation between the waters, the observed variation was well within what the team expected.

“The sampled lakes and ponds span a wide geographic area, from Alaska to Russia and from the Subarctic to the High Arctic, encompassing a large range of temperatures, vegetation types (from spruce or birch forest and shrub tundra to polar desert), and permafrost cover in the catchment,” Wauthy describes. “Therefore, it was not surprising to observe such variations; for example, we expect a bedrock lake in the polar desert to be very different from a subarctic lake surrounded by a birch forest, because the inputs from their respective watershed will be totally different. However, what our study highlighted is the fact that the waters were mainly impacted by the presence or absence of thawing permafrost in their watershed.”

Although browning of lakes is nothing new in a very general sense, northern browning does differ from what we see elsewhere in some notable ways. One is the fact that browning in the temperate and tropical regions is mainly caused directly by human activities, such as agriculture, deforestation, and urbanization. The image was taken in High Arctic from a helicopter in 2005. It shows the crack pattern in permafrost. (Credit: By Brocken Inaglory (Own work) [CC BY-SA 3.0])

“In the North, this browning as we observed it is kind of different,” Wauthy points out. “It is mainly global warming and its consequences that induce this brownification. Indeed, climate change and associated permafrost thaw release a huge stock of old organic carbon that was stuck in the permafrost. This carbon is ending up in the many lakes present in the Arctic, inducing this browning of freshwaters.”

Another difference? The swiftness of this Northern browning.

“Because of the erodible and DOM-rich nature of the permafrost landscape, northern browning can be seen as an extreme version of the global phenomenon, and may be compounded in the future by increased rainfall and extreme weather events,” stresses Wauthy. “In addition to the oxygen depletion in the waters and its consequences for aquatic organisms such as plankton and fishes, this extreme browning will likely shift northern freshwaters towards greater production of greenhouse gases across the circumpolar North. In other words, in the polar systems, the global warming itself induced the emission of greenhouse gas, and therefore, can accelerate by itself.”

At this point, there is little chance that we won’t see more browning in the northern waters. The researchers warn us of some of the effects of this process that we can expect to see in the coming years.

“We can expect a progressive brownification of the Northern freshwaters in the near future, with local and global consequences,” Wauthy states. “Locally, this will mean higher mortality of fishes and a decrease in diet quality strongly impacting communities in the North. Moreover, browner waters mean less access to drinkable water, or at least the need to spend more money on water purification.”

There are also going to be effects that ripple outward, impacting not just local communities, but everyone.

“A recent study emphasized the presence of high stocks of mercury in the permafrost,” adds Wauthy. “Thawing could also release it into the freshwaters, with high risks for fishing and local communities. And at a more global level, due to this browning, those lakes are expected to become an important source of greenhouse gases, and accelerate the global warming.”