AS IF: North Carolina Biological Station Inspires Researchers and Artists to New Heights 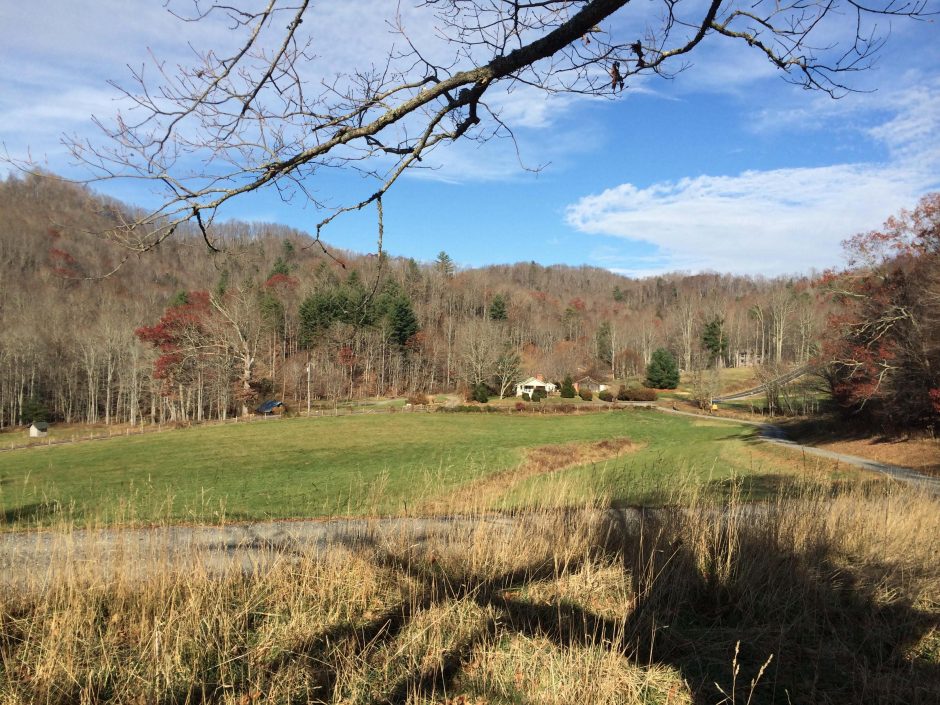 Art + Science In the Field: AS IF Center (Photo credit: Nancy Lowe)

Biological field stations make it possible for researchers all over the country to conduct environmental research. While some field stations have artist residencies, art is typically not the main focus of the biological station. Not so at Bakersville, North Carolina’s new AS IF Center (Art + Science In The Field), which just opened its doors in March 2018. At AS IF, researchers and artists are deliberately invited to commingle, collaborate and create new things together. Far from being on the periphery or existing as an afterthought, artists are considered to be on parity with researchers at AS IF, the one energized by the other’s perspective. “What I have created at AS IF is a hybrid: it’s a biological field station, yes, but it’s also an artists’ collaborative,” says Nancy Lowe, Director and Founder of AS IF.

Kaye Savage, Associate Professor of Environmental Studies at Wofford College in Spartanburg, South Carolina, echoes Lowe’s statement. “I’m a geologist with an art background. I have visited AS IF several times, and did an artist’s residency there for a week in April of this year,” she says. “It’s a great environment to bring art and science together. While science can certainly inspire art, the artist’s way of seeing can also inspire science.”

Savage performed both science and art during her time at AS IF. While she spent some of her time gathering basic stream data and searching out areas on the property that were of geological interest, she also spent time making paper and handmade-paper relief sculptures using materials found on site. “AS IF is a great area for place-based exploration. There is a lot to explore in the biological station space as both a scientist and an artist,” Savage says. 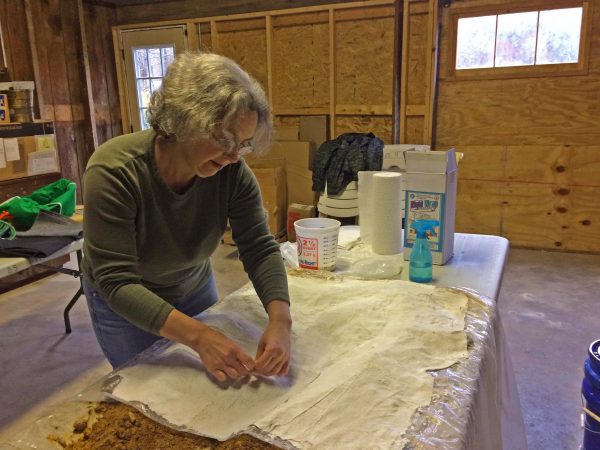 As part of her AS IF Center residency, Kaye Savage works on base for a handmade paper sculpture. (Photo credit: Nancy Lowe)

At AS IF, Savage made use of the grounds for gathering data and for gathering materials to make paper and paper sculptures. She used AS IF soils in papermaking, as well as daffodils and other plants to make fibers. She made use of the AS IF studio facilities too. “There is a garage with big doors that open on both sides, and it has water and power. Good place for both artists and scientists to work,” Savage says. “There’s even scientific glassware, like sample vials and Petri dishes, that Nancy inherited from labs that have closed. There are also lab sieves which I used to separate the silt and clay-sized particles out of the soils I collected, to use as pigment.” There are areas for artists to work indoors and outdoors. One artist even created a fiber sculpture that hovered over a pond surface. 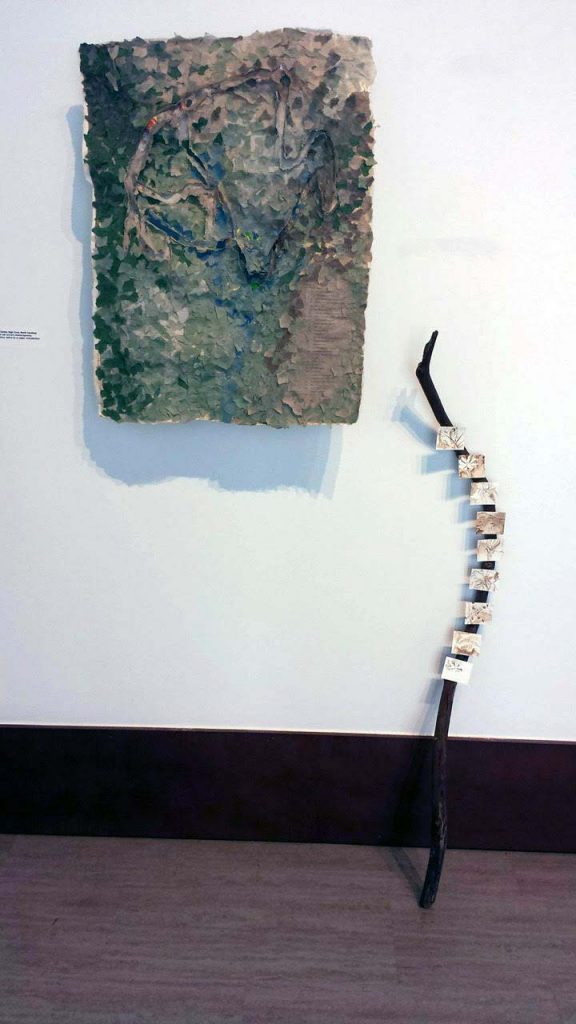 Savage’s AS IF work has since been featured in an art exhibit at Wofford College.

“We have a number of geologically interesting features here, that attract researchers like Kaye,” says Lowe. “For example, the area has some rare exposures of minerals that you won’t typically find. Down the road there is an exposure of olivine, which comes from the Earth’s mantle. Geologists collect samples of it, and Kaye incorporated it in her paper making. We also have abundant mica deposits here.”

Many diverse types of artist/scientist collaborations are going on at AS IF. For example, members of Rob Dunn Lab’s Sourdough Collective recently met at AS IF Center with two artists for an art-science retreat. One of these artist collaborators, Ferne Johannson, works in printmaking, among other media. One of the ways she makes prints is by using the scum from the process of making kombucha tea. She peels the thin scum off the surface of the kombucha, dries it, and uses it as a substrate for printmaking. Composer Jude Casseday makes music using research data. She converts data into musical notes in a process called data sonification. As a result of the collaboration at AS IF, she will make musical compositions using sourdough data from The Sourdough Collective.

The Sourdough Collective studies sourdough cultures, sampled from all over the world. The Sourdough Project aims to understand the biology behind sourdough starters’ unique composition and behavior, unraveling some of the mystery behind that behavior. As noted on the Sourdough Project’s web page, simply mixing flour and water often yields a handful of organisms that can leaven bread and create a sourdough starter. However, the biological details of how this process works is still a mystery. Some starters seem to stay the same over time, while others seem to change dramatically over a short period of time. Similar starters can yield different flavors, and compositionally different starters can yield similar flavors. The biology behind these variations is complex, and understanding it will require much scientific investigation and collaboration. 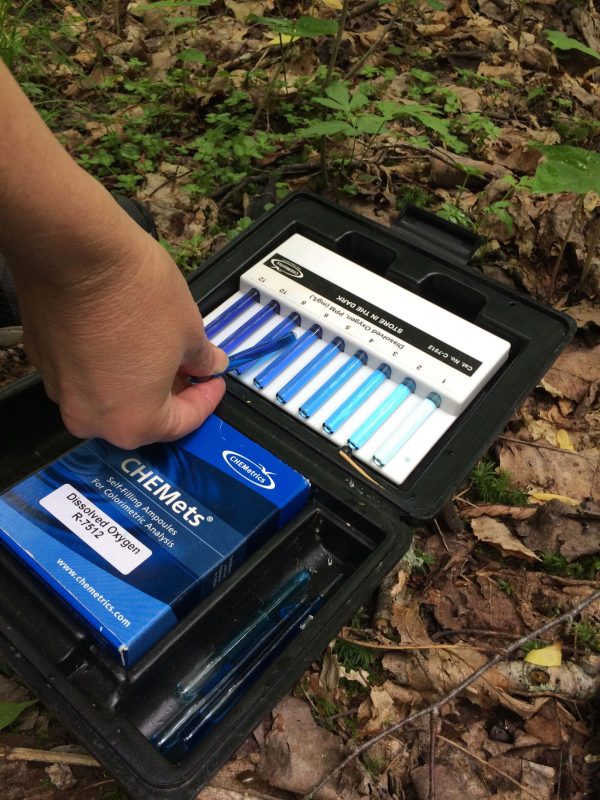 CHEMets ampoules are a robust tool for measuring dissolved oxygen in the field when high precision is not required. (Photo credit: Nancy Lowe)

Not only are the sourdough microbial species’ interactions complex, but the interaction of various types of researchers involved in The Sourdough Project is also complex. The Project is a collaboration of experts coming together from different fields. NC State University’s Rob Dunn, who leads the effort, has as his main interest, the ecology of life in homes. Other experts on the Sourdough Team include professors studying the evolution of food microorganisms, the ecology of microbes, human evolution and the history of food. Others on the team perform culturing and sequencing as well as engage with the public.  AS IF has been a good place for such a diverse collaboration.

AS IF can serve as an intersection of knowledge areas. “There are many reasons people are drawn to our southern Appalachia area,” Lowe explains. “It’s an area of incredible biodiversity, there are a lot of interesting geological exposures, and there are hundreds of artists in the area.”

Events at AS IF are designed to attract scientists and artists. “We have moth events, for instance, where we periodically collect photographic data on moths. People are drawn to those for both scientific and artistic reasons,” says Lowe. 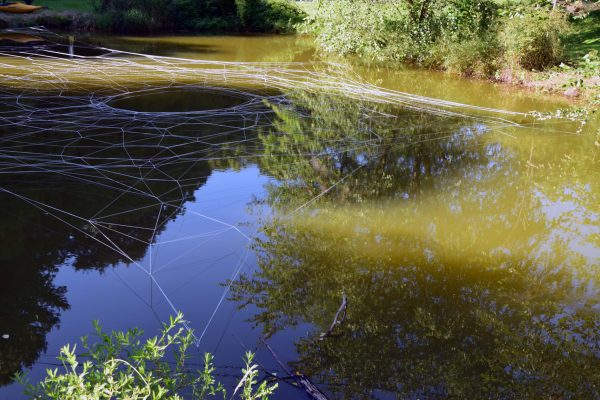 Interested in exploring ideas around water and surface tension, artist Gabrielle Duggan created this fiber art installation at AS IF Center during her residency. (Photo credit: Gabrielle Duggan)

“My work is intended to begin a long-term environmental reflection,” explains Savage. “AS IF is one of several sites I’ve visited as a scientist who also makes art. My college, Wofford, has been around for over 150 years. One of my colleagues inspired me to think we should not only look 150 years into our past but also 150 years into our future. I feel that collaborations between science and art will be part of that future.”

Lowe is already pleased with the scientific and artistic collaborations that have happened in the months-old AS IF facility. “I’m eager to invite biologists, geologists and other scientists to AS IF Center to come and collaborate. I want them to do research at our biological field station, get ideas, get inspired and even make art if they wish.”

“It’s a wonderful place to do a residency,” says Savage. “The community around AS IF is great, too. They are so supportive of us.”

Lowe is excited about the future of AS IF. “I carried the idea of AS IF around with me for years, like a seed. I was looking for a place to plant it. And now here it is!”