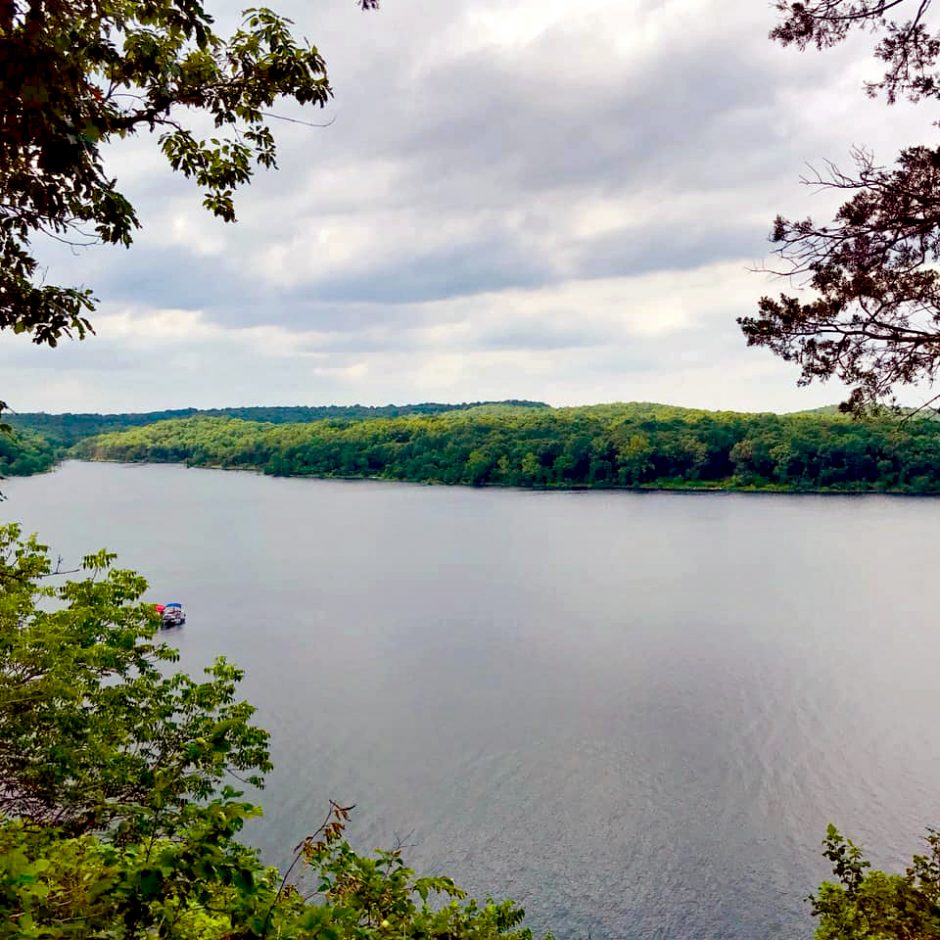 The Bull Shoals Field Station of Missouri State University, south of Kirbyville, MO at the Missouri Department of Conservation’s (MDC) Drury-Mincy Conservation area, has standard features of the White River Glade Region of the Ozark Mountains, with steep hills, streams, caves, sinks and springs. It has oak-hickory forest and post-oak savanna with bluestem balds (dolomite glades). Its glades, a unique feature, are dominated by grasses and wildflowers, with five endemic species. It has a sinkhole pond marsh with rare manna grass as well as rare and endangered species such as giant cane and running buffalo clover. Wildlife includes deer, wild turkeys, a large variety of migratory birds, and even armadillos. The area also has alligator snapping turtles (in the nearby big rivers and lake) and the greater roadrunner. Many types of lizards and snakes live in the glades. A federally listed endangered species that lives there is the gray myotis bat. The five-acre field station site is part of 2,000 acres of restricted-access conservation land.

Janice Greene, Director of Bulls Shoals Field Station since 2002 and Professor of Biology at Missouri State, found a rewarding career awaited her at the field station. “I’m recently retired,” Greene says. “I’ve very much enjoyed my time at Bull Shoals. I’ve always liked to get outside and explore. I was surprised at the variety of birds here and found them important for getting people interested in our work. Birds can really capture people’s attention.”

Birds at Bull Shoals are monitored using the Monitoring Avian Productivity and Survivorship (MAPS) protocol from the Bird Population Institute. Multiple monitoring projects going on at the Bull Shoals Field Station in addition to tracking feathered friends include weather, phenology and water quality monitoring. A temperature monitoring buoy project is currently in the works which will monitor lake temps at multiple levels.

Soil moisture and fuel moisture in addition to standard measurements such as temperature, wind speed, precipitation, etc. are tracked.

Phenology data has been taken using a phenocam since 2013. “The phenocam data is taken in conjunction with the University of New Hampshire National Phenocam website. Pictures are taken every half hour for a six-hour period. We look at green-up and fall color that way. Our phenocam site is focused on a south-facing slope which we can compare to other sites on the national website. It’s a long term look at the timing of seasonal changes,” says Greene. “That particular south-facing slope was chosen because it represented a ‘typical’ habitat in our area. It’s an open space that also has a forested hillside. The data from the pictures we take goes to the National website. We haven’t really processed the data yet, but we plan to soon. We’re still in the baseline data gathering phase.” 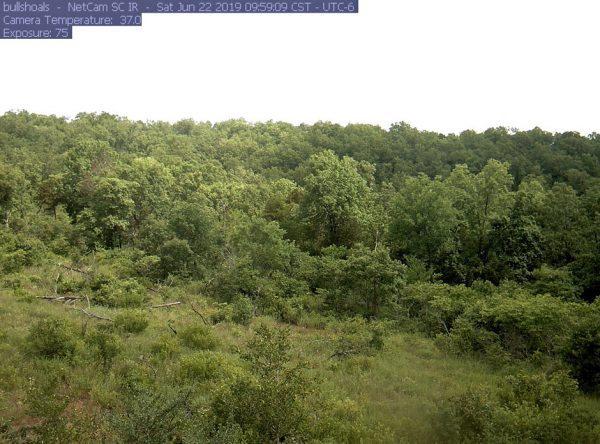 While dissolved oxygen, pH, algal density and turbidity of field station area waters are currently being measured by hand, the plan is for a buoy to take much of this data automatically. Currently, students and field station staff are collecting the data.

In addition to these efforts, controlled burns are done by MDC to keep glade areas open, as they have been invaded by cedars. Maintenance through burns has been having positive effects, restoring native habitat. “We are in a unique area, where you see southern, eastern, western and northern habitats crossing. As a result, we get some ‘oddball’ species that wouldn’t typically be expected. We have species endemic to the Ozarks like ringed salamanders, and we also have pygmy rattlesnakes, which are not commonly seen,”  says Greene. “We’ve been monitoring birds here for about 10 years, and we get some species now that we didn’t use to get, such as the American Redstart. They have extended into our range. Of all the different types of creatures, some birds have an easier time adapting their ranges to changing habitats than some other species. Their ranges may be changing due to climate change, or it could be other factors like local changes in habitats. We haven’t been monitoring long enough to see if something is changing or it’s just annual variation in distributions. ”

Birds are netted and banded in the May-to-August timeframe each year. “Some common summer birds we get here are Kentucky warblers, black and white warblers, indigo buntings and red-eyed vireos,” Greene mentions. “There are also some bigger birds here that we see whose breeding range has expanded, like fish crows and black vultures.” There are many factors that affect bird populations in general.  These include invasive species, such as cats, and pesticides like neonicotinoids, which affect insects that many birds eat. “Habitat loss and change may still be the biggest factor in the population losses in birds we have seen,” Greene suggests. “There have been big declines in some species, like the scarlet tanager and cerulean warbler.” 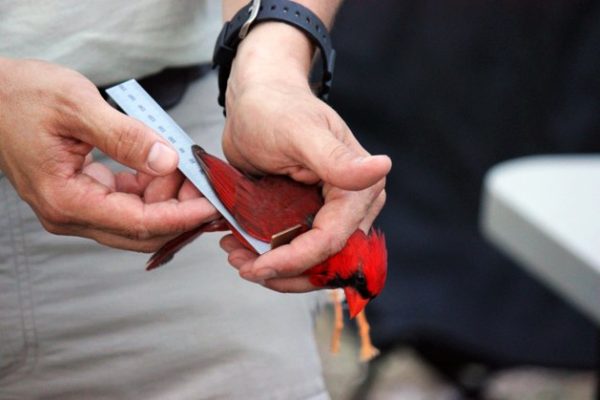 Students volunteer to help monitor birds at Bull Shoals. About 3-5 students participate at one time, for about eight sessions of six hours in length. They help in the MAPS surveys at the end of May up until the beginning of August.  Classes come to the field station to document local diversity of reptiles, amphibians, mammals and plants.

Students getting hands-on experience is one of the many aspects of Bull Shoals Field Station that Greene enjoys. “I came here after completing a doctorate in wildlife and fisheries sciences with research in environmental education,” Greene recalls. “I inherited the ornithology course and developed the monitoring program. Previously I had worked in South Texas at a private wildlife foundation. I’ve always enjoyed getting a class outside. They get a lot out of seeing nature firsthand. People get really engaged by being outside. That being said, technology can draw people outside into nature. Look at the Cornell nest cams, where you can watch raptors feed their young on your computer miles away. Seeing that can create interest by individuals. Getting spotting scopes and binoculars and seeing birds in person can hook people also. Personal experience is even better than seeing wildlife on your computer, but technology can make people want to go outside.”