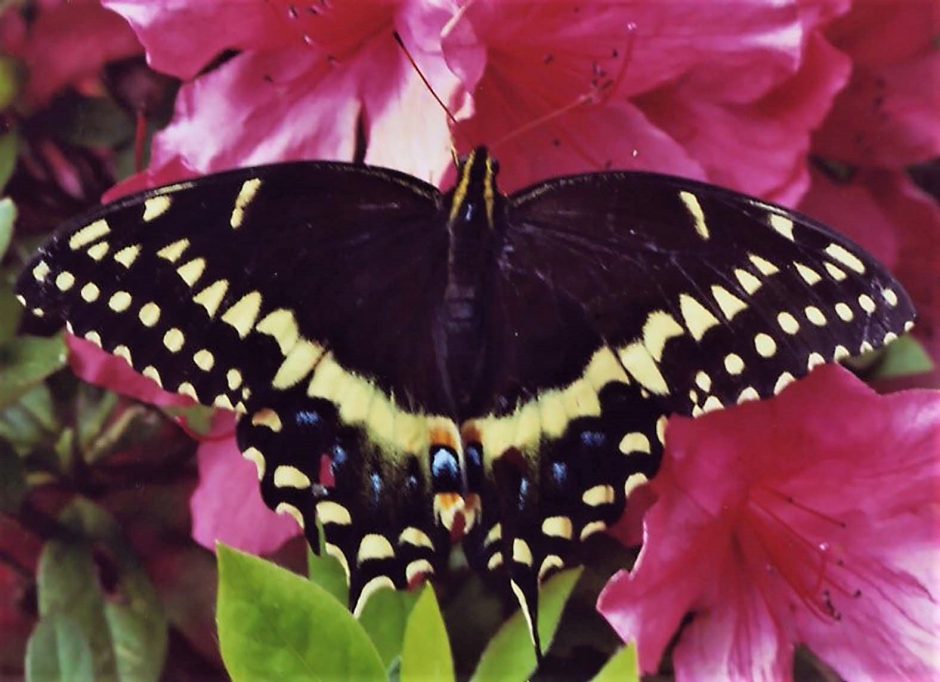 “Lepidoptera inventorying is a unique program here,” says Rachel Guy, Sapelo Island National Estuarine Research Reserve (SINERR) Research Coordinator. “Moth and butterfly enthusiasts have been doing research here for years.” Just four researchers have found 1,100 species of Lepidoptera at Sapelo Island, some of which are state records. Previously unrecorded moth species have also been discovered, and are still being discovered regularly at Sapelo.

While lepidopterology research is a special type of investigation not taking place at all NERRS, it is a fraction of the research being done at Sapelo Island NERR. Guy has held the Research Coordinator position for two years, but she had previous experience at Sapelo Island NERR, having done her doctoral dissertation work there for the University of Georgia under Nathan Nibbelink. She has been doing fieldwork at Sapelo since 2013.

Research at Sapelo Island NERR also includes the same SWMP protocols as the other 28 NERRS, collecting water quality, chemical and meteorological data. “Data sondes at SINERR have been upgraded from YSI 6600 to EXO2 sondes, with data being taken on four sites,” says Guy. The sondes are on pilings, and do not move with the tides. Data is taken on: temperature, percent saturation of oxygen, specific conductivity, pH, turbidity, salinity and depth, which is estimated using a pressure reading.  Nutrient sampling is performed once a month. Nitrates, organophosphates and chlorophyll a are measured. Water samples are taken for 24 hours over the tidal cycle with an ISCO sampler. A real-time meteorological station with Campbell Scientific CR-1000 telemetry equipment measures air temperature, wind speed and photosynthetic active radiation. There are also two surface elevation tables (SET) on Dean Creek, above and below a bridge on Nanny Goat Beach Road. The bridge originally had a culvert opening to allow tidal flow of the river, but was replaced with a larger box opening in 2014 within the same footprint of the original bridge. There are three vegetation transects next to each SET, measured out in quarter meter square plots. 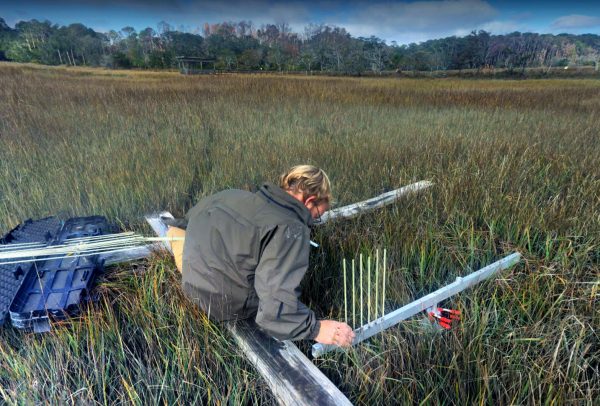 In addition to the regular SWMP monitoring, total suspended solids in water samples are also measured.

Separate from the SWMP program, other special monitoring done at Sapelo Island NERR involves moths and butterflies: lots and lots of moths and butterflies. “Researchers have been doing Lepidoptera monitoring for six years,” Guy explains. “They use both light traps and scent traps put out to attract moths and butterflies. They use overripe bananas and fermented fruit for the scent traps. They do trap monitoring one or two days and nights a month.” Butterfly and moth enthusiasts look for the insects in many places on Sapelo Island: beaches and dunes, the lighthouse, maritime forests and by the freshwater bald cypress. For the size of the area, just 25 square miles, there is a very high amount of species diversity. “The high diversity is even more impressive when you consider that we’ve only been able to trap a rather small area on the south end of the island,” says James Adams of Dalton State College. Just four researchers have identified 1,100 species of Lepidoptera on Sapelo Island. These researchers are: Adams, Brian Scholtens of College of Charleston, Lance Durden of Georgia Southern University and John Hyatt, a retired chemistry professor from East Tennessee State University. They have found many Macrolepidoptera (larger species) and Microlepidoptera (small species). Some common butterflies on Sapelo are the Palamedes swallowtail, the saltmarsh skipper and the fiery skipper. So far, 81 butterfly species have been found on Sapelo. Of the Macrolepidoptera, a Sympistis has been found that has not been previously described. Catocala delilah, Papaipema duovata, Derrima stellata and Phrudocentra centrifugaria are also larger moths found on Sapelo which were state records. Of the Microlepidoptera, Pelochrista (formerly Eucosma) guttulana, Goditha bumeliana and Lactura nov. sp are notable because of their preference for dune habitat on Sapelo. The Lactura nov. is also a previously undescribed species. In addition to the Lepidoptera work, Sapelo Island also has a citizen scientist program, which is in its third year. The program was initiated by the Friends of Sapelo group, and its major purpose is to inventory Sapelo Island bee populations. “One type of bee we don’t have commonly here is the European honey bee,” Guy emphasizes. “In other parts of the U.S. that’s the most common honey bee you will find.” Instead, Sapelo has bumble bees, carpenter bees, and a variety of other lesser-known native bees. Sam Droege, Wildlife Biologist with USGS Patuxent Wildlife Research Center, leads the bee monitoring effort. “We use different trap types for bees as opposed to moths and butterflies,” Guy explains. “For bees, we can use shallow dishes of water or dishwashing liquid. They find those liquids attractive.”

Another special monitoring program at SINERR is a new one for crab monitoring. Led by Kerstin Wasson (Elkhorn Slough NERR) and Kenny Raposa (Narragansett Bay NERR), this project involves twelve other NERRs conducting the same monitoring at their vegetation monitoring sites. The collection on SINERR started last October, which is the season of peak biomass at the NERR. Crabs are monitored via pitfall traps that are monitored for 24 hours after vegetation monitoring is performed.  Recently some new crab types have been caught. “I wouldn’t necessarily call the newer crabs we are seeing invasive, since they are coming here on their own, naturally, not because of human activity,” says Guy. “We like to call them range expansionists.” There are mangrove tree crabs, Aratus pisonii, migrating into Sapelo from Florida mangroves, for example. There are also giant blue land crabs, Cardisoma guanhumi, coming in from the Caribbean via their own devices found on the Georgia Coast but not yet at the NERR. These crabs can be six inches in diameter, so they are difficult to overlook. Another range expansionist crab at Sapelo is the mangrove fiddler crab, Uca thayeri. “The mangrove tree crabs are actually quite pretty,” Guy notes.

In addition to the special crab monitoring being done at SINERR, there is also some habitat monitoring being done that is independent of the SWMP monitoring. On Nanny Goat Beach, three posts have been set up where visitors can set their cameras at certain angles. The pictures they take are then posted on a website. The pictures, always taken at the same angles, show how the habitat at Nanny Goat changes through the seasons and the years.

Sometimes, SINERR habitat changes quickly and dramatically. “Hurricane Irma caused us to lose our primary dunes on the south end of Nanny Goat Beach,” says Guy. “It was absolutely devastating to our dune vegetation.” In response to the marsh erosion threatening roads and other structures, Sapelo Island NERR constructed two Living Shorelines, designed as a greener alternative to stopping nuisance erosion and aid habitat recovery. “We’ve facilitated two years of fish monitoring for this program using bottomless lift nets,” she explains. “The monitoring was done on natural reef sites and in a natural mud flat area for comparison to the living shoreline site.” This monitoring effort has been led by Thomas Bliss of the UGA Marine Extension Service. They have also had some support from a handful of citizen scientists, some of whom were tourists who just wanted to lend a hand. “We’re a small operation here compared to some other NERRS,” Guy says. “Every bit of help is appreciated.” 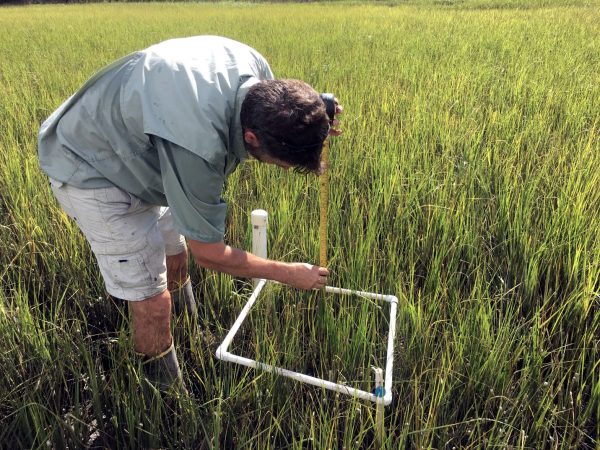 In addition to Guy and a few other staff members already mentioned, Adam McKinnon also supports SINERR as its education coordinator. In the past, he has led volunteers in phytoplankton monitoring as well as initiating a brand new horseshoe crab tagging program. “We also have a volunteer group called Friends of Sapelo, and they help us with beach slope monitoring. They do line and stake measurements. Markings on the stake tell us how elevation has changed over time. Interestingly, the low tech line and stake way is just as effective as higher tech ways of giving us elevation change data,” Guy observes.

In addition to citizen scientists and others, SINERR also gets support from larger entities. “As it is with all NERRs, most of our funding comes from our federal partner, NOAA, while the remainder comes from a state partner.  These state partners are usually a department of natural resources or a state university,” says Guy. “In our case, SINERR‘s matching state partner is the Georgia Department of Natural Resources of which we are employees of the Wildlife Resources Division.” However, SINERR benefits from a longstanding academic research presence on the island, too.  Sapelo Island has a legacy of ecological research on the island through the University of Georgia: “Eugene Odum and John Teal did pioneering research in estuaries and salt marshes beginning in the 1950’s with the University of Georgia Marine Institute.” SINERR now appreciates an ongoing on-island partnerships with the University of Georgia Marine Institute and Georgia Coastal Ecosystem Long Term Ecological Research Program, funded by the National Science Foundation.

In her years at SINERR, Guy has seen many changes. Generally speaking, two hurricanes led to a large loss of natural sand dunes. Several varieties of crabs have naturally migrated into Sapelo Island and now call it their home. There have also been changes in water chemistry, such as increased chlorophyll a and lower dissolved oxygen concentrations. There has also been a trend of increased water temperatures over time.

Some of the changes Guy has seen have been surprising. “We have 6-8 foot tides on average and are a highly flushed system. This flushing shouldn’t allow for eutrophication (algal blooms), but we are seeing a slight increase in chlorophyll a, a signature of increasing algae. We are exploring what might be causing this.” says Guy. “We also have done an extensive study of marsh habitat and we’ve seen how old causeways have negatively affected the marsh. The effects were larger than we would have thought. The recent changes to the old culvert bridge to a wider box bridge on Nanny Goat Beach Road allows for a more natural tidal flow. We are actually getting to watch our salt pans recover into healthy vegetated marsh.” Guy can’t emphasize enough how special the facilities at SINERR are, and how exciting the marsh research at the NERR has been for her and for other researchers. “This is a great place to study if you really want to understand how sea level rise in the future due to climate change is going to affect an estuary system,” she mentions. “It’s a unique and beautiful place, relatively untrammeled, accessible only by ferry and with very little private development. There are only about 70 Sapelo Island residents.”

Sapelo Island NERR, while home to some beautiful historic sites such as R.J. Reynolds Mansion operated by the Georgia State Parks and Historic Sites Division, is perhaps even better known for its natural beauty. “You couldn’t ask for a better natural lab,” says Guy. “There are 100 miles of shoreline on the Georgia coast, the largest expanse of undeveloped coastal marsh on the Eastern Seaboard. There is also a deep cultural history here that dates back thousands of years to the Guale Indians. Sapelo Island NERR is a fascinating place for many reasons. I highly encourage researchers to visit and see all that we have to offer.”