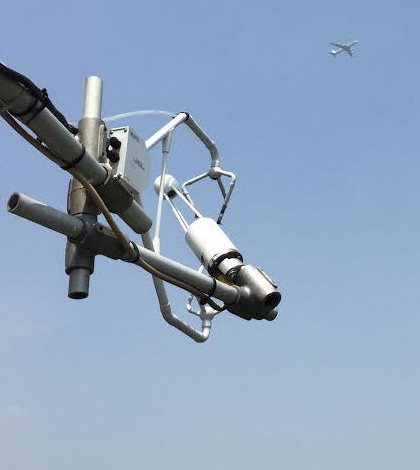 Satellites in Earth’s lower orbit have shown that they can track some of the critical things that affect the planet’s air quality, such as pollutants, clouds and wind patterns. But these observations have at times been limited by coarse resolution and their inability, due to the timing of satellites’ passing, to adequately capture details of air quality events that can develop in time periods as short as a single day.

To help solve those issues, NASA has launched a series of research flight campaigns looking at air quality in Asia, Europe and the United States. The idea is to collect measurements nearer to the Earth’s surface, as well as on the ground itself, and then use those data to improve air quality models that make satellite interpretations better.

In the Asian leg of that tour, scientists are focusing their efforts around South Korea. The mission is called KORUS-AQ for Korea U.S. – Air Quality Study. Its flights began May 1 and should continue until June 12.

But why is Korea a good place to study air quality?

According to a NASA blog posting, the location of Seoul on a peninsula is beneficial to researchers because the city and the pollution produced there are separated from other sources of emissions. In addition, Seoul’s human-produced emissions are concentrated in its urban areas but are surrounded by more rural, agricultural areas.

The contrast between urban and rural zones on the peninsula allows scientists to study and differentiate human- and naturally-produced emissions and better understand how they interact chemically. Understanding the chemical reactions between urban and agricultural emissions is critical for improving models that forecast air quality. An international team of some 300 scientists is contributing to the effort, including researchers from the National Center for Atmospheric Research, who are flying scientific instruments on a NASA DC-8 research airplane. Other aircraft used in the scientific flights include a NASA B200 and the Hanseo University Kingair.

Researchers are flying routes off the west coast of South Korea, across South Korea and off the east coast to sample air moving to and from the peninsula. Their flight paths are sometimes quite complicated, according to a NASA video on YouTube, with planes sampling just a few thousand feet above the surface in populated areas or doing spirals to build vertical profiles of the air.

Instruments used aboard the airplanes include Whole Air Samplers, which collect air samples in canisters that get analyzed after the flight for their chemical makeup. Levels of gases and aerosols are also measured in addition to other parameters. These complement ground-based sensors like those at a research forest site near Taehwa Mountain. This ground site has sensors that track small particles, ozone and hundreds of other chemical compounds.

Along with the ground-level measurements and those gleaned by scientific aircraft, air quality measurements will also be captured by the Korean NIER Geostationary Environment Monitoring Spectrometer, deployed on a satellite, over East Asia.