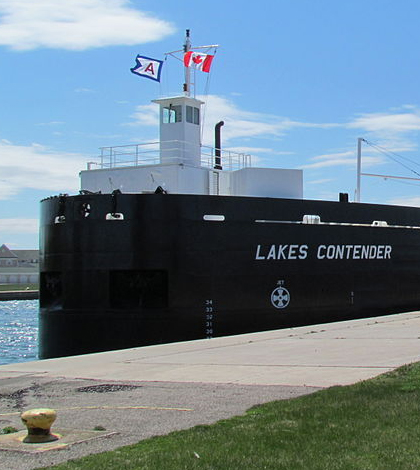 The Lakes Contender is a large cargo vessel on the Great Lakes. (Credit: Michelle Hill / U.S. Army Corps of Engineers)

In August 1984, things were ramping up at the San Diego shipyards. Crews with the National Steel and Shipbuilding Company had an order to fill. And the customer, an energy corporation, was riding high on a massively successful ad campaign promising gas so good that it would “put a tiger in your tank.”

It took a year to complete the construction and the newly built ship would not launch until October 1986. But the brand new vessel did have a name: Exxon Valdez.

At the time, single-hulled tankers were common and the Valdez was no different. Nearly 1,000 feet long and 167 feet wide, the ship was a formidable oil transporter. Indeed it was a welcome addition to Exxon’s fleet, which it joined a few months after its launch.

But we know how this story ends. Just a few years into its seafaring work, in 1989, the Exxon Valdez would find itself crashing into a reef in Alaska’s Prince William Sound. All that cargo space turned into a liability, as the volumes of crude oil it held, 11 million gallons by many estimates, leaked out through its hull and into the Sound and the Gulf of Alaska. At the time, it was the worst single oil spill to ever occur in United States coastal waters.

Following the disaster, extensive cleanup work began that saw volunteers and government workers scrubbing beaches, cleaning oil-covered wildlife with soap and taking sediment samples to gauge oil seepage, among many other things. Policymakers also took action, putting forth proposals they believed would help prevent spills like the Valdez in the future.

Passed not long after, the federal Oil Pollution Act of 1990 began requiring all new tankers built in the United States to be of double-hull construction. All existing single-hull tankers were to be retrofitted with an extra hull or completely phased out of operation by 2015. Over the years, these requirements have had positive effects, as studies into the effectiveness of double hulls show that they are better at decreasing the risk of oil spills than other hull constructions. The aftermath of the massive oil spill from the Exxon Valdez included extensive cleanup efforts as well as some policy changes. (Credit: U.S. Navy)

But there have been negative consequences to this shift, as two hulls provide a space for ballast water, the emptying of which in ports worldwide has increased the risk of spreading aquatic invasive species. Arguably, the effects of the two-hull standard have been seen in the Great Lakes, where the presence of many aquatic invasives is believed to be linked to ballast water discharge.

The famous invasives, like zebra mussels, quagga mussels and eurasian ruffe, have been well documented in the basin. Round gobies, now an essential part of Great Lakes food chains, have too. But what about the life forms that are too small to see?

Researchers at the University at Buffalo set out to answer part of that question, in a decades-long investigation studying biofilms that form on ballast tank walls in transoceanic ships. The work began in the 1980s, but this story focuses on a project completed in the 2000s and led by New York Sea Grant’s Robert Forsberg, who was a master’s student at the university at the time. Results of the study have been published in the journal Management of Biological Invasions.

“All of those things led us to study this. More specifically, due to zebra mussels. They used to exist only in Europe to begin with, in freshwater in Europe,” said Bob Baier, director of the Industry/University Center on Biosurfaces at the university. “All of a sudden, they showed up in Lake St. Clair and now they’re dominant. They’ve marched across the country and yet there’s a great, big, salty ocean between that they can’t enter.”

Baier says that the research is looking to prevent similar invasions in the future, and he cites the Asian clam as one species that is knocking on the door of the Great Lakes. Asian carp is another. But those encroaching invasive species weren’t the subject of the investigation; instead, it was all the microscopic life forms thriving in biofilms on the walls of ballast water tanks.

As can be imagined, it’s not easy studying something that you can’t see. So the scientists devised special tactics and equipment to get the job done. Along the way, they came up with creative names for their inventions as well.

“We actually created the unit — we call it a BOB, Ballast Organic Biofilm sampler. It’s an object that looks like a long, thin football,” said Baier. “Inside are two slides and it rides suspended in the ballast tank. We’ve actually done this with three ships going in and out of worldwide harbors, studied the buildup of biota, what it is and why it’s there.” In addition, scientists also used flow cells located in the ballast tanks of the ships to study the slimes forming on walls. If there weren’t flow cells to use, they would make what they called Portable Biofouling Units (PBUs). These were essentially large coolers with openings, manifolds and pumps that moved water in and out and allowed researchers to gather biofilms within.

The BOBs and PBUs hitched rides in ships that made some 80 transits across the world’s oceans. Once the U. Buffalo researchers got them back, they analyzed the microscopic life forms growing on the BOB slides and within the PBUs using microscopy and spectroscopy methods. They made several surprising finds.

“What Forsberg found was that, no matter where these ships went or for how long, these biofilms eventually became equal to one another,” said Baier, who also teaches dental medicine at U. Buffalo. “Taking an example from the world of dentistry, the plaques on your teeth, my teeth and people from Eskimo villages are all the same because there’s been enough kissing, spitting and trading of saliva over time. We see that the strongest and most persistent are the organisms that survive.”

That’s a good example to explain the biodiversity loss, but the bacteria in the biofilms are a lot different than the ones found on human teeth. Several found in the biofilms were of unique interest to the scientists, including a strain of cholera. Another has been found in infected wounds and implicated in causing ear and eye infections, as well as gastro-intestinal issues. And still another is believed to cause meningitis.

Baier says that these organisms can be sloshed up into the air as ballast water rushes from tanks and points to a case reported by the Cleveland Clinic of a water skier who got an ear infection from one of the bacteria. That presents a risk for asthmatics and those who have difficulty breathing.

But perhaps most intriguing are all the unknown constituents living in the biofilms. Some other researchers at Old Dominion University are stymied, Baier says, by what they’re finding. “In these ballast waters, they’re seeing what they can only call ‘virus-like particles,’” said Baier. He mentions that they’ve found one that is believed to attack fish.

Other researchers around the Great Lakes basin are working to describe all the microscopic lifeforms found in ballast water, but knowing what’s in the water may not be enough to solve the issues that ballast tank biofilms pose. The Lakes Contender is a large cargo vessel on the Great Lakes. (Credit: Michelle Hill / U.S. Army Corps of Engineers)

“The problem is so severe that, in Lake Superior, they’re designing units to clean the ballast water on the ship itself,” said Baier. “That cleans the water, but it doesn’t clean the walls.”

He describes bioadhesion, or how the creatures stick to tank walls, as an important consideration when trying to get rid of the biofilms. Baier notes that the biofilms were found to use their sticky strengths to remain in place.

“The harder you push on it, the tougher the film actually sticks. It protects itself. It’s why they can exist through storm surges. You can see rocks after hurricanes nearshore and mussels and clams are still there,” said Baier. “It usually takes about 2,000 PSI to remove them.”

Baier and others were surprised to find that the biofilms were persisting despite open-ocean saltwater purging done across the shipping industry. The best way to fix the problem, he says, is to use a special coating to make the walls of ballast tanks so slick that the organisms simply can’t hang on.

Getting the job done won’t be easy, but he thinks it’s possible. And it can be done without using poisons or causing harm to other creatures.

“Our approach is to go to a non-stick, easy-release coating so that the stuff that stays will slough off. It’ll be clean and sustainable,” said Baier. “I have one that I favor called Wearlon. It’s a proprietary coating by a small manufacturer in Saratoga that’s a mix of silicone and epoxy. It’s hard and tough. It’s not quite as good as silicone, which is too soft, and it’s not as bad as epoxy, which is too sticky.”

Of course, getting enough ships to apply the coatings to make a dent in biofilms across the Great Lakes shipping world would be quite an undertaking. Baier envisions crews of longshoremen applying the coatings while ships are docked and unloading. He says that the Port of Buffalo, home to a remediated Bethlehem Steel plant, would be an ideal spot to set up such a coating station.

“We think it’s Buffalo’s place to be better stewards of the Great Lakes,” said Baier. “Every ship that’s coming in that still has the plaque needs to get its teeth brushed.”