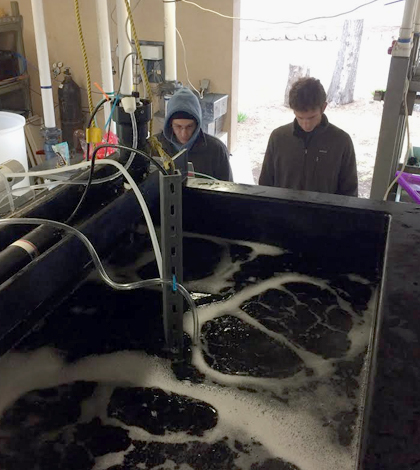 As a result of ocean acidification and other pressures on coral reefs, coral populations have decreased 30 to 60 percent from their levels since the Industrial Revolution. While reducing anthropogenic emissions is clearly part of the answer to stopping the global decline of coral reefs, some researchers are trying to do what they can to reverse the decline using other methods.

David Koweek, a doctoral candidate in the Earth Systems Science Department at Stanford University, along with his advisor Professor Robert Dunbar, and Stanford Research and Development Scientist David Mucciarone, have discovered a technique for reducing periods of extreme acidity caused by CO2 buildup around coral reefs and other coastal ecosystems: bubbling air near the reef at a critical time during the day, which can decrease the amount of carbon dioxide in the ocean water up to 30 times faster than natural processes can.

To make the find, Koweek and his team built a simulation system using a 1.5-cubic-meter tank filled with seawater. To simulate the natural effects of vegetation on the carbon dioxide levels in the water, they placed kelp in bags in the tank overnight. The kelp respired carbon dioxide, making the level high by morning, a little above 1400 micro atmospheres, just as it is each morning in a typical ocean environment.

Following removal of the kelp the next morning, Koweek and his team started bubbling in scuba tanks. After four hours of bubbling, the carbon dioxide levels were down to about 600 micro atmospheres — a big improvement. Physical and chemical sensors were used. Sea Bird SBE 56 temperature sensors were used in the bottom, middle and top of the tank. The temperature and pH were measured before water was returned via peristaltic pump back to the top of the tank. A Nortek acoustic Doppler velocimeter was used to measure bottom water velocities. An Aanderaa 3830 Oxygen Optode measured dissolved oxygen concentrations. A Honeywell DuraFET III pH probe measured pH. All sensor data were used to validate computer models.

“The advantage of this technique is its simplicity. You only need an air blower, tubes to distribute the air and bubble diffusers (or airstones) capable of producing a bubble stream. The equipment is durable in the coastal zone and the equipment costs are low,” says Koweek. “We could treat more than coral reefs with this system. We could also help mitigate acidification of sea grasses, salt marshes and mangroves.”

The bubbling technique would not only offer immediate benefits, but it would also offer more benefits in the future as climate changes and acidification gets worse, Koweek mentions. Although the simulation tank required a significant amount of research effort, the tank was only a small part of the study. Most of the study effort was computer simulations. Three were built, with each building on each other in complexity.

The second model experiment had the same tank conditions, but variation was allowed in the bubbling rate and flushing of the tank. Under conditions of high flushing, scientists found the effectiveness of the bubbling was greatly reduced. In the third and most complex model experiment, Koweek and his team simulated bubbling in a coastal reef, such as a seagrass or coral reef ecosystem, which has large chemical fluctuations every day. The models simulated the biological activity, waves and tides that occur in coastal ecosystems. The end results showed how bubbling was able to truncate periods of extreme acidity occurring in pre-dawn hours, where real coastal ecosystems exhibit periods of greatest acidity from CO2 buildup through the night.

“Generally we found that the more we bubbled, the more carbon dioxide we were able to take out, and that the technique was especially effective at reducing extreme acidity in simulations for ocean conditions expected in the year 2100,” Koweek says. However, he does not view the technique as a cure-all for the problem of ocean acidification. “It would work over limited areas, around 100 meters by 100 meters. It also needs a lot of energy to get the carbon dioxide out of the ocean. Does the benefit outweigh the energy we have to put in? That’s a question we would need to answer.”

But if the process were solar powered, Koweek says that could move the energetics calculations in the bubbling technique’s favor.

“What we really need to think about are the extreme conditions, where conditions are the worst for coral reefs and other populations like mangroves. Bubbling could be used in a limited area on an emergency basis, for example if there’s been a raw sewage release, eutrophication or severe rainstorm effects,” says Koweek. “It might also help in a very low-tide situation. It could prevent damage while carbon dioxide is high.”

Koweek and his colleagues were surprised by how effective bubbling was at reducing carbon dioxide in seawater. “It worked better than I would have thought,” he mentions. “It isn’t likely to be a global solution, but it could still be a local solution. We would need to decide which sites are valuable enough to warrant what would be, at the moment, an expensive intervention.”

In terms of future research, Koweek and his colleagues hope to do limited lab and field trials.

“We think the technique would be good for improving coastal ecosystems,” he says. “Right now, it’s a proof-of-concept study, but if we can power bubbling with solar arrays or with wave energy, bringing it into the field might become feasible in the future.”