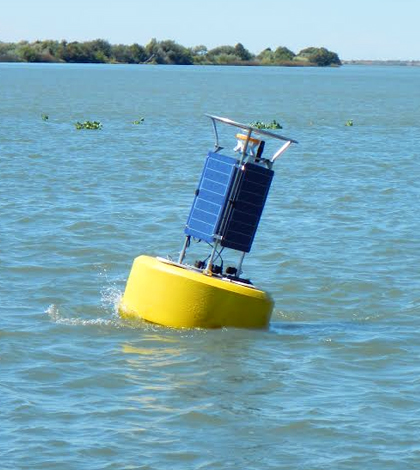 The Liberty Island Restoration Project was an ambitious undertaking to bring back part of the California Delta’s wetlands and habitat. The damage to the wetlands that were once present there had persisted for so long that officials working on the project had to bring in historians just to figure out where the old marshes used to be.

That was around 2010, during which year a design for the project was completed and implemented. It created open water channels, emergent tidal marsh lands and floodplain habitats to sustain water fluctuations. All of this was done in an effort to help important wildlife living in the delta as well as fish species like Chinook salmon and delta smelt.

But beyond just putting new marshes in place, it’s important for delta restoration managers to verify that their efforts made a difference. Doing that involves monitoring conditions around the site to see how its habitats and water quality have improved.

Crews at the U.S. Geological Survey’s California Water Science Center oversee such a network that encompasses the delta. It relies on a number of continuous monitoring stations that gather data on the area’s water quality, and has been collecting data for the last few years. In 2014, the USGS added a NexSens CB-950 Data Buoy to complement that effort.

“The buoy is located at the mouth of Liberty Island in the Cache Slough Complex in the northern portion of the Sacramento-San Joaquin Delta,” said Scott Nagel, hydrologic technician with the U.S. Geological Survey. It is equipped with several sensors measuring parameters including water temperature, conductivity, pH, dissolved oxygen, turbidity, fluorescent dissolved organic matter and chlorophyll-a. Nagel adds that nitrate, phosphate, ammonium and blue-green algae are also tracked. “All parameters matter, but the nutrient parameters can really help us to understand the lower trophic food web and bottom-up drivers of the aquatic ecosystem,” said Nagel.

There is a small crew, he says, that maintains the water quality continuous monitoring network at the USGS. These include Thomas Johnston, student intern; Renee Runyon, hydrologic technician; and Kyle Nakatsuka, a field assistant.

Other buoys in the network, two NexSens CB-500s, help to add to the understanding of the impacts that conditions and nutrients have on aquatic life in the delta and the overall quality of their habitats. Too much turbidity, for example, could influence light penetration in the water that aquatic plants use. Or high algae levels can bring about low-oxygen conditions for fish.

But data aren’t just upping knowledge for folks at the USGS. Nagel says that the data gathered are also shared with concerned stakeholders and make their way into print for wider distribution. The data from the buoy are sampled every 15 minutes and telemetered. Anyone can see the measurements available here: LIB buoy data.

“We have had a buoy at this site for almost three years and have been constantly pleased at the data quality,” said Nagel. “Some results are currently in press and others are being compiled into a data report, so keep an eye out for them.”