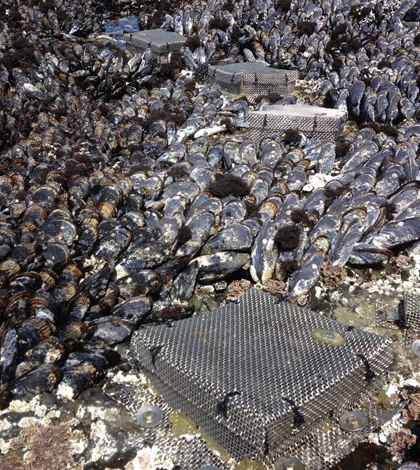 Stainless steel cages used to house mussels during the experiment. Cages were bolted to substrate and used to limit predation during the grow-out experiment, where mussel growth was compared to pH, temperature and chlorophyll-a regimes at seven different sites. (Credit: Kristy Kroeker)

California mussels (Mytilus californianus) are a widespread, edible species native to the West Coast. They are found clinging in bunches along coastlines in Mexico, California and the Aleutian Islands. The mussels are plentiful today, but as the climate continues to warm and oceans become more acidic, will they stay abundant in the future?

Kristy Kroeker, assistant professor of Ecology and Evolutionary Biology at the University of California at Santa Cruz, has spent the past several years employing sophisticated technology to peer into the future of California mussels. Much of the technology Kroeker uses in her studies has been developed in house at Monterey Bay Aquarium Research Institute (MBARI) or Scripps Institution of Oceanography.

Kroeker and colleagues collected data from seven West Coast sites from 1993-2012, which gave them a sense of what typical conditions were. Anywhere from 37 to 360 samples were taken at each site. A climatology report was also created.

“We weren’t so interested in the temperature and pH fluctuation over time as we were in the trend of mussel resilience. We wanted to try to get a sense of whether mussels in the future would be as resilient as the mussels of today,” she says.

The scientists grew mussels in the field for a few months, after which they were exposed to drilling dog whelks for a few weeks in a predation assay. The mussels that didn’t have a consistent food source tended to grow more slowly and make thinner shells. “The study mussels could tolerate more acidic conditions as long as they had enough food at their disposal, but if they didn’t, they were twice as vulnerable to predation by the drilling dog whelk,” says Kroeker.

Kroeker and colleagues use modified Honeywell DuraFET pH sensors that are adapted for use in house at UC Santa Cruz. She credits Scripps researcher Todd Martz for initially designing this pH sensor technology.

The sensor is housed along with a second reference electrode in a PVC tube, 2 feet long and 6 inches in diameter. The housing is bolted to the substrate with hose clamps. While the sensor readings fluctuate too much to be of value in a tide pool setting, they work well for open channel flow and monitor temperature and pH with excellent accuracy for long periods of time.

“It’s a different technology,” says Kroeker. “It’s an ion-sensitive field effect transistor. The electrode isn’t housed in glass. It’s an unusually stable sensor that is very consistent through time. We used one of these sensors to monitor pH at each of our seven study sites.”

Another unique technology employed by Kroeker and her colleagues is the Robo Mussel, which consists of a temperature sensor embedded in a hollowed mussel shell. Epoxy is used to fix the sensor in place.

“The intention was to mimic the interior environment of the mussel,” says Kroeker. “We have two of them at each of our test sites. We are trying to get as accurate a picture of what conditions the mussels really experience as we possibly can.” Kroeker credits Brian Helmuth, professor of science at Northeastern University, with pioneering the Robo Mussel research. 50-milliliter water samples were filtered with a 25-millimeter filter to collect phytoplankton, which helped measure chlorophyll-a concentrations. A fluorometric procedure from Francisco Chavez, senior scientist at MBARI, was used to collect this data. All data were standardized to be at the same height in the water.

The immediate surroundings of California mussels are of great importance to survival. If the local conditions for a mussel are not good, meaning too acidic or too little food, there isn’t much the mussel can do to help itself. “Mussels are stuck wherever they land as larvae,” Kroeker explains. “They can’t just move away.”

The cold upwelling waters are also more acidic. In the future they will be more acidic, but Kroeker’s research suggests that as long as the mussels are in water with frequent cold upwelling and plenty of nutrients, they should be able to get adequate food to grow their shells thick enough to keep out predators, such as drilling dog whelk. But the upwelling shouldn’t be too frequent — this could mean phytoplankton blooms don’t happen and mussels go without a good food source.

Kroeker was surprised to find that some of the fastest-growing California mussels were ones located in hotspots of relatively acidic conditions.

“It was clear that if the mussels had enough food, they were capable of dealing with a more acidic environment. But take their food source away, and their shells grew more slowly and they are more vulnerable to predation,” Kroeker mentions. “Phytoplankton availability turned out to be pretty critical.”

Top image: Stainless steel cages used to house mussels during the experiment. Cages were bolted to substrate and used to limit predation during the grow-out experiment, where mussel growth was compared to pH, temperature and chlorophyll-a regimes at seven different sites. (Credit: Kristy Kroeker)