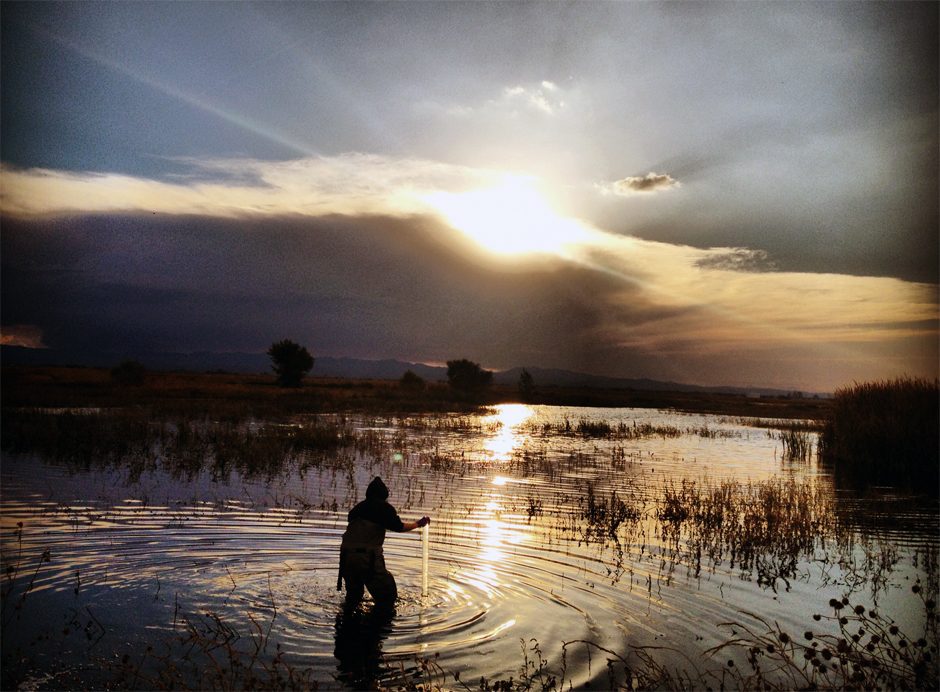 Today, the Marine Pollution Studies Laboratory (MPSL) at Granite Canyon is part of The University of California at Davis, a key source of knowledge and continuing research on aquatic toxicology. It was not always so: in its past, the site served a very different function. “It was once a naval installation,” says Bryn Phillips, Research Specialist at Granite Canyon. “It is currently owned by NOAA, but they allow UC Davis to occupy the facility.” Phillips has a deep knowledge of Granite Canyon’s history, having been a Research Specialist there since 1992. He also has a BS degree in zoological sciences from California State at Long Beach and an MS degree in marine sciences from San Jose State University, Moss Landing Marine Labs.

“The lab’s early history was as a mariculture facility, but it evolved into an aquatic toxicology lab.  In terms of aquatic toxicity testing, our major interest, in the beginning, was developing protocols for the West Coast marine environment,” Phillips recalls. “Projects at the lab range from the impacts of urban runoff and agricultural runoff to statewide monitoring of aquatic environments. The aquatic toxicity test in all its forms is our basic tool.”

Granite Canyon mainly uses U.S. Environmental Protection Agency protocols. “They’re cookbook types of experiments, simple procedures designed to indicate toxicity, like a ‘canary in a coal mine,’” says Phillips. “We look at the organism’s lethal and sub-lethal responses to environmental toxins. We can look at the organism’s growth, reproduction, development or genetic aberrations (the genetic portion is not done here at this lab). All that information together gives us an overall picture of the water quality.” 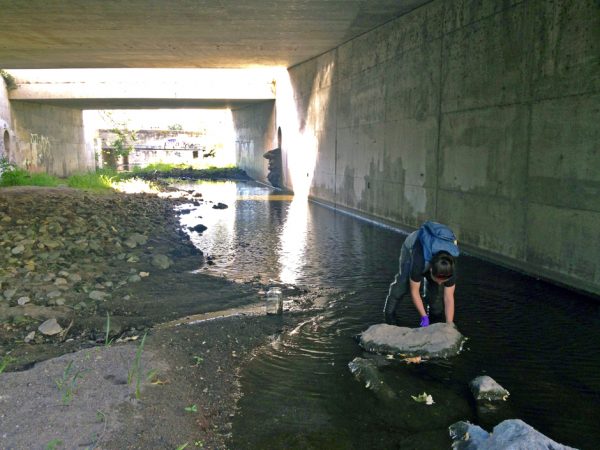 Phillips credits the Clean Water Act of 1972 as being an important impetus for a lot of toxicity studies, including those at Granite Canyon. “The Clean Water Act started positively influenced aquatic systems,” he notes.

Granite Canyon was involved in the development of West Coast toxicity testing protocols. “Prior to the Marine Bioassay Project, there were no toxicity protocols specific to the West Coast,” Phillips recalls. In order to get a broad view of toxicity effects, many types of organisms were monitored in that study, including fish, small shrimp, abalone and giant kelp.

Phillips explains the toxicity evaluation procedure for fish larvae in a little more detail. “In a potentially contaminated sample, we would look for the ‘acute endpoint,’ in other words, does the organism live or die in the water? If it lives, we then look at the ‘growth endpoint,’ or whether the organism not only survived but also, will it grow and reproduce,” he explains. “This is where biomarkers might also be examined, as well as hormone levels in the fish. Some estrogenic contaminants can feminize male fish. Other contaminants can cause effects at the cellular level.”

Organisms are chosen to be part of the aquatic toxicity studies at the MPSL based, in part, on how quickly they reproduce. Standard lab rats, alas, could not participate very effectively in aquatic studies. Instead, mysid shrimp are used as they can create a new generation during the seven-day test. Another popular organism is the daphnid, which can bear three or four broods in seven or eight days. 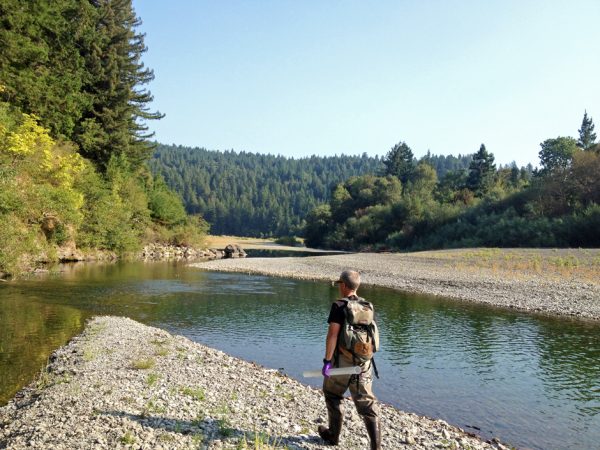 “Our protocols are EPA approved and vetted, and they can be downloaded from the web,” says Phillips. “In our lab, we primarily do visible analysis and/or microscopy.”

Toxicity assessments are determined by signs that an organism is thriving in contaminated water samples or signs that it isn’t. An electronic balance is used to measure the weight of organisms after exposure, with lower weight indicating the organism is not thriving as it should. Toxicity can also be related to water quality. Several water characteristics are monitored during the tests including pH, dissolved oxygen, salinity, temperature, nitrates and phosphates. A benchtop computerized Fisher Scientific Accumet interface is used to gather the monitoring data. YSI 6-series sondes are also used during the collection of samples in the field to collect dissolved oxygen, pH, temperature and conductivity information.

In his 27 years at Granite Canyon, Phillips has seen the monitoring projects evolve over time. “In the beginning, we were especially interested in point source discharges and developing aquatic toxicological testing protocols. Later, we were doing more investigations on toxins that gather in marine sediments. We were also doing some water column work. We then expanded our pollution effects research from bays and estuaries to streams and rivers. Back then, in the 1990s, the big interest was organochlorine effects, such as those from DDT and other insecticides. These were sticky, and they adhered to particles, which made them especially difficult to remove from the environment,” Phillips recalls. “By the late 1990s, early 2000s the interest shifted to the effects of organophosphate pesticides. More recently, we became especially concerned with neonicotinoids, which can affect bees. The neonics are water soluble, so they can be transported wherever the water goes. Contaminants of emerging concern are chemicals we are finding in the environment that originate in personal care products or are used as flame retardant materials. We are also dealing with the presence of pharmaceuticals. For example, some researchers have been finding Prozac and ibuprofen in fish tissues.” 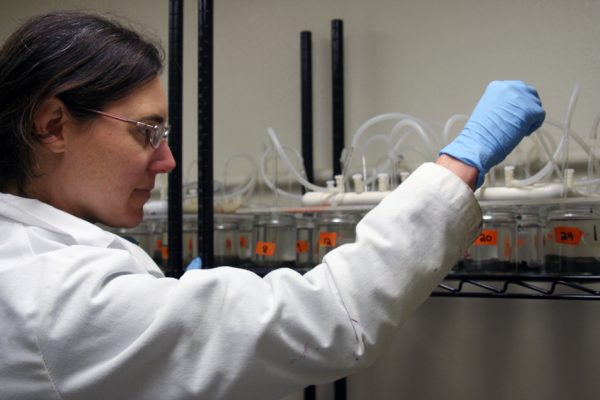 One of the difficulties in aquatic toxicity work is that organisms often experience effects from multiple environmental factors. Determining why a group of fish, for example, failed to thrive or died is often hard to determine. There can also be a mixture effect of toxins on an organism. “We can see lesions on a fish, cancer in a fish, or reproductive effects. It’s also true that ‘the dosage makes the poison,’ as they say. So how much of a chemical, or chemicals, is present is a factor that also must be considered,” Phillips explains. “Sometimes there’s a clear cause of the toxicity. Sometimes there is a single contaminant in the water at a concentration well above the threshold of the organism, and I can be pretty sure that’s what caused the organism to die. Other times there seem to be a combination of possible factors, and it’s not definitively any one thing.”  There are investigative techniques called toxicity identification evaluations (TIEs) that can use separation techniques, such as HPLC, and chemical analysis with GC-MS to help pinpoint chemical bad actors.

Another factor to consider is the condition of the test organisms themselves. “We want them to all be the same. We don’t want to introduce unnecessary variables if we don’t have to,” says Phillips. To keep the quality of the test organisms consistent, Phillips and his lab team use only known and trusted organism suppliers, such as Aquatic Biosystems, to provide them with test organisms such as fathead minnows and topsmelt. Daphnids, on the other hand, can be cultured in the lab. But there are also many test organisms that are not raised in farms or labs, and they must be harvested from the wild. “When we take giant kelp samples, for instance, we collect the reproductive blades. Those can only be collected fresh from wild kelp,” says Phillips. 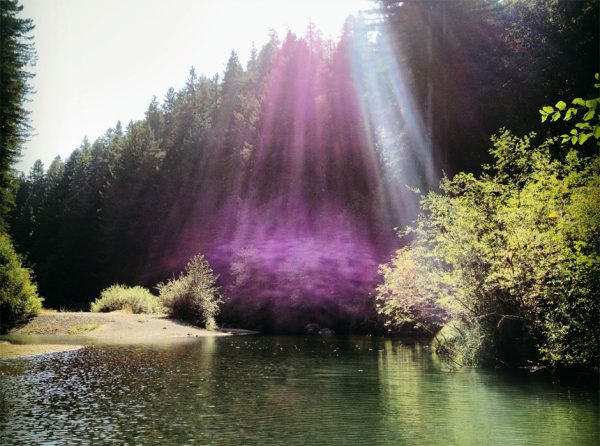 The MPSL crew collects water and sediment samples from creeks, rivers and lakes. They can also utilize other state-funded sampling crews depending on the project.

In his time at Granite Canyon, Phillips has seen local species abundance rise and fall. “Some starfish are sometimes scarce, sometimes abundant. There used to not be many black abalone now they seem to have made a comeback. We’ve also noticed that the health of some of our sites has become better with time, likely because people are getting better at applying pesticides, and finding more targeted ones that work more efficiently,” he says.

While he enjoys seeing a gradual improvement in some areas and working on the beautiful California coast, Phillips notes that running a coastal lab comes with a unique array of challenges. “There are coastal costs embedded in conducting research here,” he says. “We struggle against storm damage, rust, salt damage and damage to electronics, just because of the ocean environment.”

While the health of the environment has improved in some ways thanks to research efforts, challenges remain. “There have been shifts in industry over time, and not all of them have been good,” Phillips observes. “It seems like when we get a handle on one problem, another emerges. However, it does seem like we are making some positive progress in how people think about the environment.”