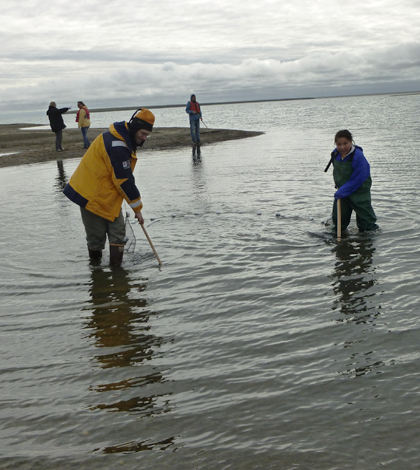 As far as research trips go, getting to Kaktovik, Alaska isn’t bad. Commercial flights routinely fly there, but sometimes fog makes it difficult for planes to land.

The delays are worth the wait for two University of Texas researchers who help run an annual marine science camp there. Ken Dunton and Jim McClelland go to the small Alaska town, which has a population less than 300, for field work in April, June and August for several weeks each year. The camp they oversee takes place in August and is possible through a partnership between the University of Texas, U.S. Fish and Wildlife Service and Kaktovik’s Kaveolook School.

“The main goal for the summer science program is to get kids excited about science,” said McClelland, an associate professor of marine science. “The program also gives us an opportunity to share what we are learning about the local environment and connect with the Kaktovik community.”

To get the youngsters excited about science, the camp is jam-packed with activities. Field trips are combined with classroom activities that let the children, native Iñupiat Eskimo, see firsthand the methods and sampling technology involved. There are dissections, beach walks that focus on coastal erosion and a geocaching scavenger hunt. The children also take educational boat rides.

“The research vessel we use for the camp is a 27-foot Boston Whaler. It’s equipped with a sorting table that makes it easy to look at what comes up in our various sampling devices,” said McClelland. “We also have sensors that measure temperature, salinity, pH and dissolved oxygen. The children learn how to deploy and operate those sensors.”

McClelland says water samples are collected during the boat trips with a pump system. A Van Dorn sampler is also lowered into the water periodically for collecting discrete samples.

“The water samples are used for many different analyses, including measurements of nutrient and suspended sediment concentrations,” said McClelland. The kids also get experience running plankton tows. A beam trawl fishing net configuration runs along the bottom of the seabed to capture shellfish and other creatures that live there.

In addition to the beam trawl, a PONAR grab sampler collects portions of the seabed for the young scientists to evaluate. The PONAR sampler consists of two opposing semi-circular jaws that are held open by a trigger mechanism. The sampler is lowered to the bottom where it makes contact, setting off the trigger and snapping the jaws shut to trap a sample inside.

“The children get to see all of these sampling techniques and look at the samples that we collect,” said McClelland.

The Iñupiat children see firsthand the techniques, equipment and samples collected, but the camp does more than increase their knowledge. It also fosters a connection with the local ecosystem, something that McClelland and Dunton say is already very strong within the Iñupiat community. More than 90 percent of Kaktovik residents fish and hunt to feed themselves. They see how they are part of the food chain every day.

Dunton saw Kaktovik’s connection with nature when he first lived in Kaktovik in 1977 as a graduate student. That period gave him a reference point for judging the effects climate change has had on the small Alaskan town.

Dunton remembers snowfall in August of his first year, friendly people who wanted to barter anything he had for fresh caribou or fish, and the honey buckets which have since been replaced by a village sewer system.

The summers, he says, are definitely warmer. The people are still very friendly, but wary of outsiders and much more protective of their lands and coastal ocean. The DEW – Distant Early Warning – line station there is almost gone. It was set up as part of a network of radar stations in the northern Arctic region meant to detect incoming bombers from the Soviet Union. A new airstrip is being built inland because the old one has become subject to frequent ocean flooding.

“In 1977, there was no talk of climate change; it is now a frequent topic of conversation,” said Dunton. “Concerns with toxic dumps from government facilities in 1977 have been largely replaced by concerns related to global warming, sea level rise and coastal erosion.”