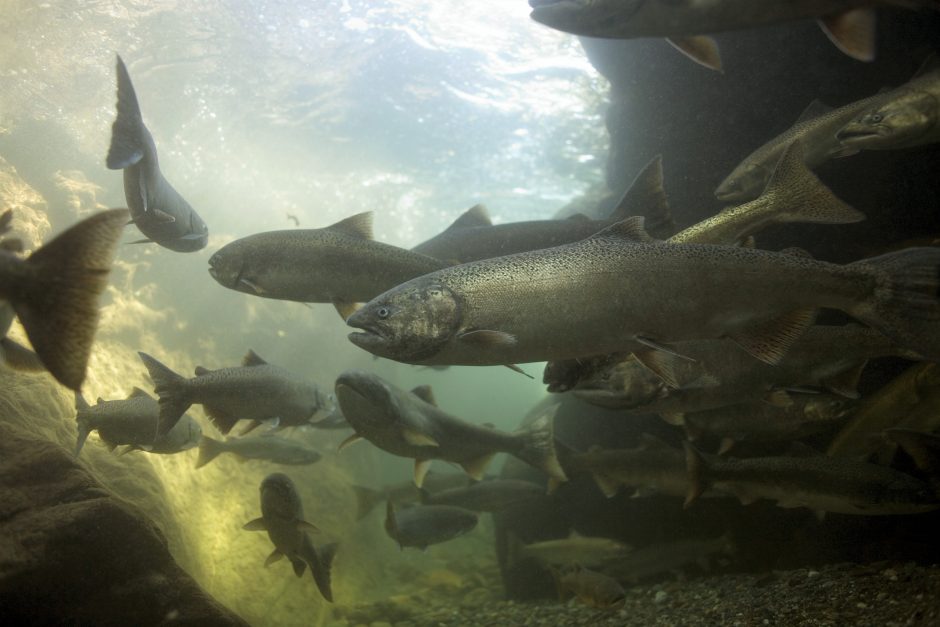 Up until the 1800s, salmon were so plentiful in California that these “bits of silver pulled out of the water” could be observed ascending the waterways, thousands at a time, each season. However, decades of logging, the construction of dams, and other human interventions have changed the waterways of the state so significantly that the range of the salmon has been permanently altered. Now, a team of scientists collaborating through the Interagency Ecological Program have developed a plan to improve salmon management and, hopefully, help save the species.

Team members from NOAA Fisheries, the California Department of Water Resources, the U.S. Fish and Wildlife Service, the California Department of Fish and Wildlife, the U.S. Bureau of Reclamation, and the U.S. Geological Survey (USGS) recently published their recommendations to help promote fish recovery and inform water management decisions. Their action points include upgrades to tracking technology, such as genetic fingerprinting and high-end transmitters to be implanted into juvenile fish. Ultimately, the team believes their recommendations will better enable scientists to discover how salmon get through the waterways of the state to the ocean—and where they fail along their routes.

A unique solution for California waterways

Rachel Johnson, a research fisheries biologist at the Southwest Fisheries Science Center of NOAA Fisheries, is the lead author of the recent report. Dr. Johnson explains that although the plan was inspired in part by existing models in the Columbia River system, a number of adjustments needed to be made in order to implement the same kind of monitoring and tracking in the California water delivery system.

“In the Columbia River, there are a series of dams that the water and fish move through together,” describes Dr. Johnson. “Because of the infrastructure that’s along the salmon migratory corridor there, they are able to outfit these structures with fish tracking technologies such as PIT tag readers and observation structures such as fish counting and video stations at the dams to monitor fish numbers. In California, we have several high-head dams upstream of the salmon habitat, and the fish and the water are not transported together through a series of dams. Therefore, the fish tracking technologies are not exactly transferable.”

To address these fundamental differences in infrastructure, the team made some important changes to the program from the beginning.

“To track fish, we propose to expand the use of electronic tags in fish, and to deploy receivers that can listen to the fish as they pass by that will also be linked to water quality monitoring; these will measure velocities,” details Dr. Johnson. “These receivers are often deployed on structures such as bridges, but they can also be mounted or tethered along the salmon outmigration pathway, and ultimately to USGS water quality monitoring stations that provide information on water temperature, turbidity, chlorophyll levels, and water velocities.”

These tiny transmitters embedded into the fish allow the scientists to be more accurate in their work with the entire salmon population.

“They allow for area-specific survival estimates from the tagged and released fish,” Dr. Johnson clarifies. “You can track how many fish make it to the next downstream location. We are also using the tags to calibrate our traditional sampling gear that can be used to estimate the number of untagged fish that are moving past different locations.”

The six specific recommendations made by the panel include: In this context, the genetic fingerprinting tool achieves something more than traditional tagging and tracking can do.

“Genetic fingerprinting identifies the specific run of salmon,” explains Dr. Johnson. “The ‘parentage’ analysis can be used to link which adults were successful at producing progeny each year. As you can imagine, in regulated rivers, whether fish return and spawn first or last may make a difference in how successful they are at having their young survive. This information will also tell us how many parents were successful; did all of the salmon we counted produce young that survived, or only a fraction of them?”

Fewer adult salmon returned to the Central Valley in 2017 than any other year on record, and this trend affects the rest of their ecosystem.

“Salmon are a small but important component of aquatic ecosystems,” Dr. Johnson emphasizes. “Salmon in particular bring ocean nutrients in their bodies when they move upstream and spawn. This pulse of nutrients is an important link to the plants and invertebrate communities in the streams that fuels food for the juvenile salmon when they hatch, and food for other animals too, such as beavers, otters, raccoons, birds that feed on carcasses or other fishes that feed on salmon eggs.”

Right now, there is not enough information to enable scientists to forecast how many salmon will return from year to year. The team stresses that generating data on salmon movement, conditions, and numbers is the first step in being able to develop predictive models that capture the complexity of factors that influence salmon returns. More access to information and a transparent process creates a situation that’s better for everyone.

“One of the advancements in this work is access to monitoring data in real-time which is a big leap in modernizing our practices,” comments Dr. Johnson. “This involves having field crew posting information in machine-readable formats to aggregate/automate information/queries accessible to the public.”

Interagency collaboration is also critical to the success of complex projects like this one.

“Several of the recommendations are taking hold, including genetic monitoring, acoustic tracking, and data access,” Dr. Johnson adds. “Working with multi-agency partnerships is critical to moving the needle on identifying information gaps and implementing solutions.”