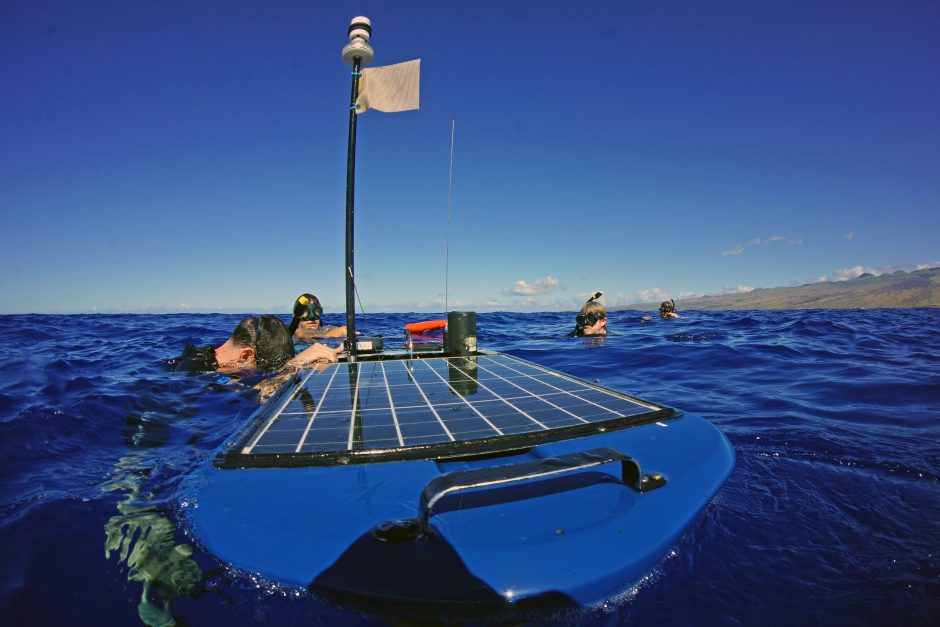 Deploying a wave glider and solar panels in the water at the site. (Credit: MTU, GLRC, via Dr. Meadows)

This summer, Michigan Technical University unveiled a new Marine Autonomy Research Site, located at the waterfront Great Lakes Research Center. The site is part of an ongoing push to advance autonomy in the marine industry and to help take humans out of the equation when research on the water is dull, dirty and/or dangerous. Dr. Guy Meadows, director of the Great Lakes Research Center (GLRC), spoke to EM about the site.

“The project is an initiative of the eight Great Lakes Governors and two premiers of Canada,” explains Dr. Meadows. “The goal is to try and leverage autonomy in the land sector into both the aviation and the marine sector, and we are trying to play a role in that marine sector.”

“We’re in an excellent location to be able to invite other creators and users of autonomy to have an ideal place to test,” details Dr. Meadows. “Our environment is unique. Lake Superior is very deep and very cold. In the springtime, we have a tremendous amount of fog, and then our summers are clear and relatively calm. But then, as we move into the fall season, the winds become very strong out of Canada and the wave climate becomes very, very hazardous and very large. So we have an opportunity to test vessels, not only in calm water but in some of the marine environments that are typical around the world.”

The MTU team’s project to develop and strengthen the workforce in marine autonomy is really part of a much bigger strategy.

“There’s a tremendous part of our year where we are not able to do direct measurements of water quality or the biologic life in the Great Lakes because of our harsh environment,” remarks Dr. Meadows. “Our interest is to operate an autonomous surface vessel that can do that sampling with no humans onboard. That’s one of the long-range goals that we’re working towards, to be able to do science missions without putting people in harm’s way.”

In fact, many kinds of marine research provide classic applications for robots. 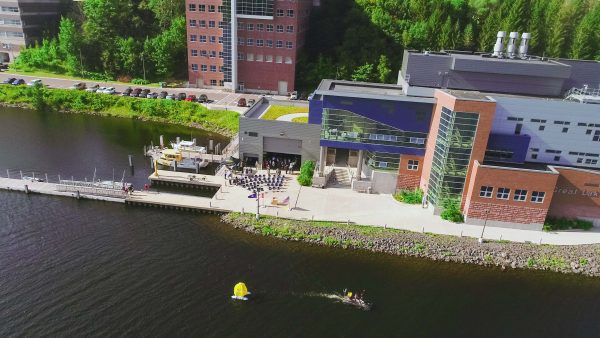 “We held a national level workshop at the Solomons Maryland with the Alliance for Coastal Technologies a couple of years back, and the consensus was the autonomous surface vessels are ideally suited for missions that are dull, dirty, or dangerous,” comments Dr. Meadows. “Dull, dirty, and dangerous are our buzzwords when we’re deciding what types of missions are best suited for the new and constantly evolving set of platforms that are available to large-lake and ocean scientists.”

Currently, the team at the Great Lakes Research Center is working with the Department of Defense and other partners, turning their unique location into a real asset.

“One MTU research center does mobility studies on land, taking advantage of our over 300 inches of snowfall every year, which allows us to test land vehicles under a whole variety of very adverse conditions,” Dr. Meadows describes. “We’re trying to mimic that here with the Great Lakes Research Center, providing a test place where people can do their work in the comfort of a large facility that’s directly on the waterfront and then move out and test on the ice, under the ice, and around the ice. You can actually drive to test your equipment and then go to ‘the Arctic’ where there are no facilities to repair and fix and work the bugs out.”

Clearly, this is a huge advantage when the alternative is simply testing under dissimilar conditions and hoping equipment works in the field. Knowing equipment will function properly under harsh conditions is even more important when its autonomous. 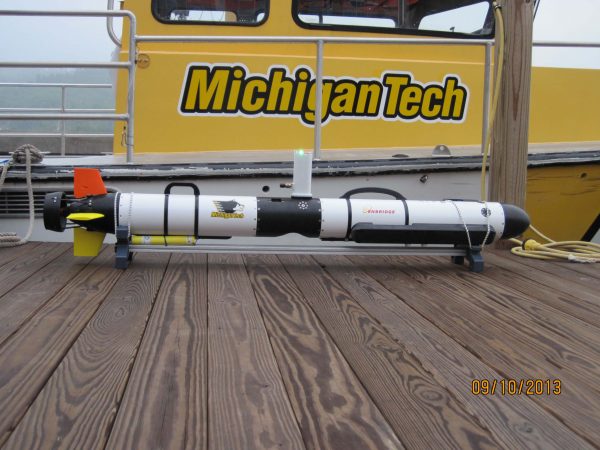 The team deploys a range of equipment in the test bed. (Credit: MTU, GLRC, via Dr. Meadows)

“Our personal work lately is to teach smart vessels how to maneuver in large sea states,” Dr. Meadows says. “So we’re working closely with the US Coast Guard on how their Surfboat operators make the decisions to control vessels in enormously large seas, and then trying to teach the autonomous vessel to do those same types of maneuvers under the same conditions.”

Most data buoys, whether used for research, monitoring weather conditions, or for other purposes, can only be deployed during the non-icy months. This is also true for many autonomous marine vehicles.

“Our buoys will not survive the winter ice conditions that we typically experience here in the northern lakes,” explains Dr. Meadows. “Ice loading on vessels or platforms can be a huge game ender, essentially, for an autonomous system. As the waves splash, ice accumulates on the structures of buoys or or other types of platforms. Ships have sunk here in the Great Lakes just because of ice accumulating on them, putting them in a dangerous stability condition. So it’s not just being crushed by the ice and freezing in, it’s a number of these other factors that happen in northern climates. Part of our desire is to be an Arctic testbed, a place where you can prove ideas without the expense of going to the actual Arctic.”

The team at the GLRC gets remarkably close to actual Arctic conditions. 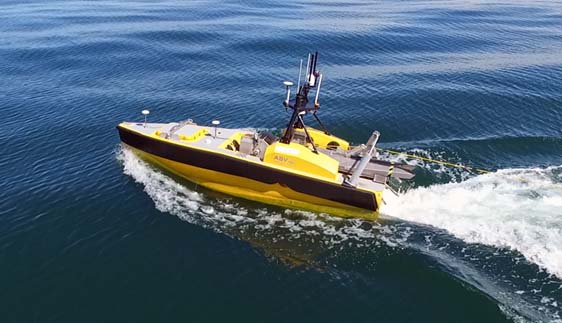 The ASV in action. (Credit: MTU, GLRC, via Dr. Meadows)

“We get temperatures almost as cold as the Arctic,” remarks Dr. Meadows. “And freshwater ice freezes at higher temperatures than does saltwater ice, so we can actually accumulate ice at greater rates than you might encounter in the ocean. It’s an even harsher environment in some of those respects. The last few years we’ve had the ice thicknesses in excess of a meter. We get substantial ice here.”

With climate change, researchers may see even more extreme conditions at this “Arctic” proving ground in the near future.

“We are seeing greater extremes, and we’re seeing increased storminess in our buoy data on the wave climates,” details Dr. Meadows. “This past fall, we recorded the largest waves ever documented nationally here in Lake Superior, waves greater than 28 feet in height. We are seeing tremendous storms of late, and we’re bracing ourselves for another stormy winter.”

Autonomous vehicles may be on the road faster, but they’re coming to the ocean, too. Central to the team’s current projects is their own fully autonomous research ship. The team is now working hard to fully operate the small autonomous surface vessel, which is about 18 feet in length. 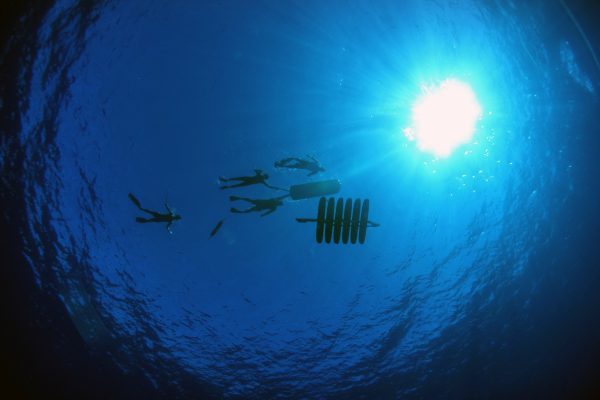 Team deploying equipment in the water at the site. (Credit: MTU, GLRC, via Dr. Meadows)

“It’s capable of doing almost anything a human-occupied vessel can do,” states Dr. Meadows. “It can go where you send it, operating for up to a week at a time, 24 hours a day. It can do very detailed bottom mapping. It can do vertical profiles of parameters by raising and lowering various instrument platforms. It can hover and park itself at a particular location if you find something interesting. It’s really amazing how far that science has come.”

Obviously, ensuring that this kind of ASV will be safe on the water is a top concern.

“Part of the testbed is to be able to test the safety factors, which is the Coast Guard’s primary interest in these types of vessels,” emphasizes Dr. Meadows. “How well does the collision avoidance work? How well do they understand the rules of the road? How does that all change when it’s foggy or snowing or rough?”

Unlike sea gliders, which only surface occasionally to establish navigation and transmit data, autonomous vessels operate entirely on the surface, presenting more of a hazard to other vessels and people.

“These autonomous systems have kind of crept up on on the ocean community,” remarks Dr. Meadows. “The fully autonomous survey vessel working on the surface is a real boat, and it has to follow the rules of the road, and the Coast Guard needs to make sure that it’s safe and doesn’t endanger other vessels. All the same concerns that the automobile companies are going through right now. Yes, the marine industry is somewhat behind the aircraft industry and the car industry, but not for long. We’re hoping we can help play catch up here. We’re trying to get out ahead of the problem.”

Top image: Deploying a wave glider and solar panels in the water at the site. (Credit: MTU, GLRC, via Dr. Meadows)