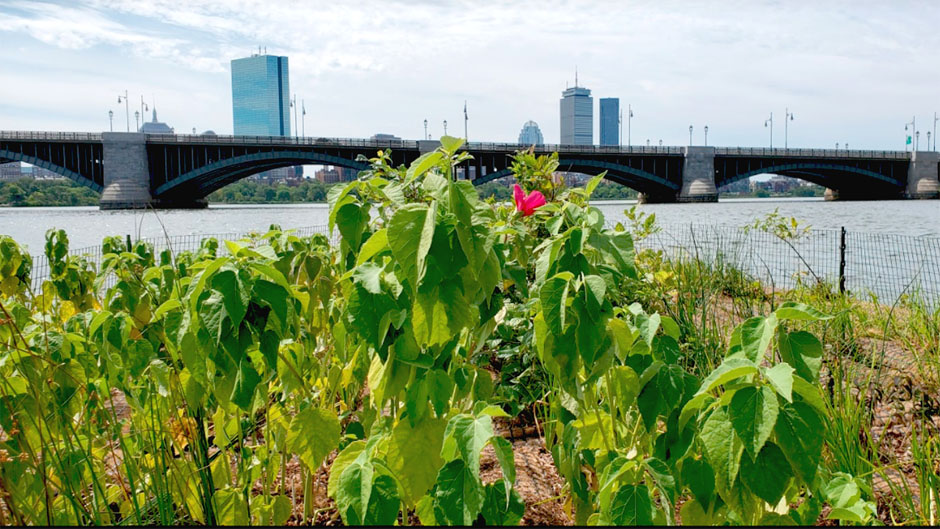 Native plants bloom on a floating wetland in the Charles River between Cambridge and Boston. (Courtesy: Max Rome)

The Charles River used to be a swimming hotspot for Cambridge and Boston residents.

Decades of industrial pollution and nutrient runoff have degraded water quality and eliminated public swimming in the Lower Charles, but a movement is afoot to get Boston and Cambridge back in the water. One step toward the goal of a safely swimmable river—without the need to obtain a permit, as is now necessary—is detecting and managing the harmful algal blooms that appear on the river.

An experimental floating wetland and new research and analysis of water quality data that shows a possible effective detection system for algal blooms on the Charles River are two new steps toward the goal of safe, accessible swimming.

The EPA has had a monitoring buoy floating on the Charles since 2015. Its publicly available data includes measurements for temperature, specific conductance, pH, dissolved oxygen, and turbidity. It also measures chlorophyll and phycocyanin to gauge the presence and levels of blue-green algae that can release harmful toxins into the river. 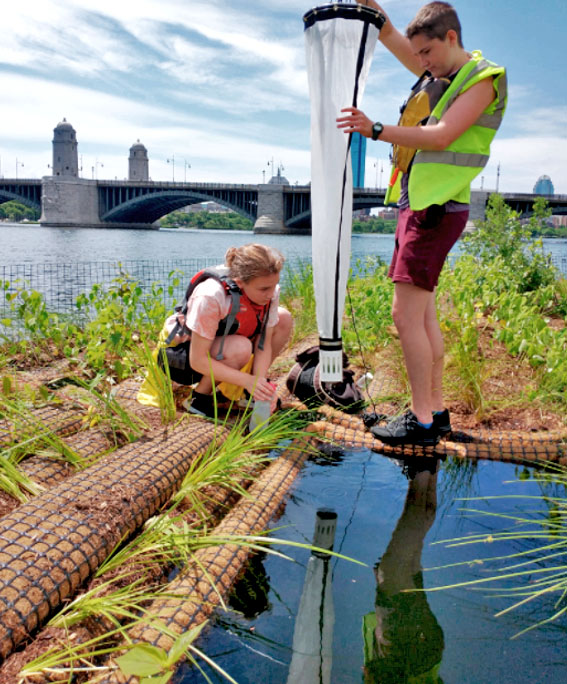 “The first step we needed to take was to look at a promising location: What does the water actually look like on a daily basis?” Rome said.

To start, it seemed likely that E. coli and other bacteria would be the biggest issue, but monitoring data revealed they weren’t.

“The river looks pretty decent in terms of bacterial contamination in certain locations,” Rome said. “But the cyanobacteria blooms are a really big problem.”

“It was a really fun data analysis project to try and figure out how the sensor outputs correlate with the cell counts,” Rome said.

There were a few surprises.

For one, cyanobacterial cell counts correlated closest with turbidity, not chlorophyll and phycocyanin, measurements from the EPA buoy. They tracked with each other so closely that, for the Charles River, turbidity could be an easy and effective predictor of algal blooms.

The makeup of the blooms bucked expectations as well.

“In Massachusetts, a lot of regulations are written based on the assumption that the cyanobacteria we’re going to be encountering is Microcystis,” Rome said. “But in fact, these blooms are dominated by Aphanizomenon.” Click To Tweet

While the findings relate specifically to the Charles River, Rome thinks there are lessons to be learned for measuring cyanobacteria elsewhere.

“That was really interesting to me,” Rome said, “the extent to which cyanobacteria didn’t show up on chlorophyll sensors.”

Similarly, the strong correlation between turbidity and cyanobacteria cell counts shows there are creative ways to monitor water quality and predict harmful algal blooms. A turbidity sensor could be a more affordable entry point to water quality monitoring.

“If you’re a watershed monitoring group, it’s likely something you can afford,” Rome said.

A floating wetland for a swimmable river

Rome is taking another stab at Charles River algal blooms, too.

In 2020 as part of a team that included The Charles River Conservancy and students from local universities, Rome deployed a floating wetland on the river. The project, in part, aims to foster the growth of zooplankton that eat cyanobacteria. The roots of the wetland’s native plants will extend into the water, providing the plankton shelter from predators, allowing them to grow larger and more numerous.

Plant roots from a floating wetland should shelter larger zooplankton. When those plankton graze on cyanobacteria, they could shrink harmful algal blooms. (Courtesy: Max Rome)

The floating wetland’s first season was different than expected because of the Covid-19 pandemic. It was deployed in June rather than the beginning of the growing season, but it’s first year was a successful one and proved the design would work with a few tweaks.

Throughout the season, researchers regularly sampled the water beneath the wetland and at a control site to compare zooplankton species and size. The plankton beneath the floating wetland weren’t any larger nor were there more of the larger species the researchers hoped to see.

That might be because the wetland was deployed for shorter than planned and the roots that would serve as zooplankton shelter were only in their first year of growth. Larger, grazing plankton might be present in coming years “as plants become better established and produce a greater root volume,” a report of the group’s findings said.

In 2021, the wetland will get an earlier deployment and researchers will sample for plankton and cyanobacteria five days a week through the summer. If things go as hoped for, this year they’ll find healthy plants, larger zooplankton and a promising method for reducing harmful algal blooms.

The data from this study will inform phase two or the project: a larger wetland that could harbor enough plankton to have a measurable effect on algal bloom development.

It’ll be one step toward a healthier Charles River.