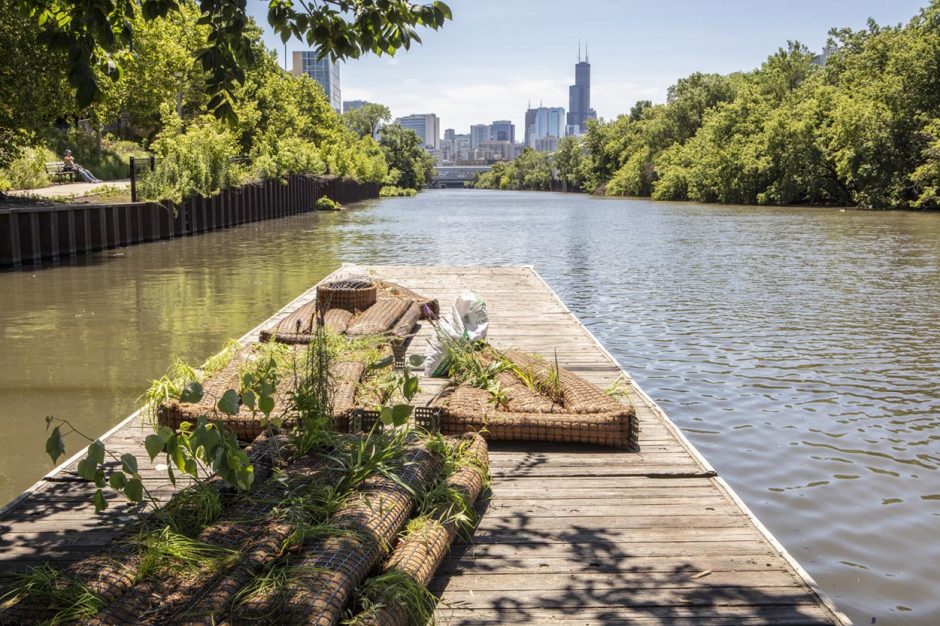 Components of the island, ready to install. (Credit: ©Shedd Aquarium/Brenna Hernandez, via communication)

The Chicago River is in many ways a quintessential urban American waterway. In parts of the city, it materializes between slabs of concrete and asphalt. It doesn’t wind its way between banks as a natural river might; the Chicago River takes the course given to it by humans, splitting streets and bridges. A feat of engineering; the river once flowed into Lake Michigan, until humans decided to reverse that course and force the river to empty into the Mississippi River Basin.

However, this level of interference has taken its toll on the Chicago River. The South Fork of the river’s main branch was once a sewer for the meatpacking industry of the Union Stockyards. Those days it was called “Bubbly Creek” thanks to gases from decomposing entrails and blood infiltrating the water and bubbling to the surface. The State of Illinois issued “do not eat” advisories for the river’s fish due to contamination by mercury and PCB.

“It is no secret that, historically speaking, the Chicago River is not a good place to be a fish,” remarks Dr. Andy Casper, the Director of Freshwater Research in the Haerther Center at the Shedd Aquarium in Chicago. “Water quality issues, especially industrial and combined sewer overflows, along with a lack of suitable aquatic habitats combined to form a real problem. However, since the Clean Water Act helped reduce industrial pollution and the City of Chicago and Metropolitan Water Reclamation District (MWRD) have made progress on combined sewer overflows, habitat becomes the limiting step.”

Thanks to the persistence and planning of many in the region, however, the Chicago River is enjoying a chance to make a comeback. Dr. Casper explains that Urban Rivers, a local non-profit, generated the floating habitat idea. The island would be made up of many individual modules, and the Urban Rivers team believed that inspiring local people from the neighborhood to come down to the water would lead to the cleanup of plastics in the river. 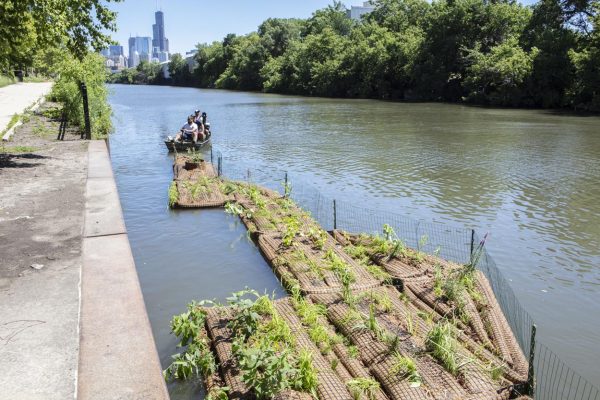 Their next step was to raise money, find partners, and engage local people in building and monitoring the module habitat. The murky waters are now home to a river “island,” an artificial floating eco-garden designed to improve the water quality naturally, and engage locals in preserving the river. The island and its planned companions will make up a “wild mile” in the Chicago River, an urban oasis for Chicagoans to enjoy.

The wild mile North Channel site in the Chicago River is located adjacent to Goose Island and the Whole Foods store on Kingsbury. The spot was chosen by the Urban Rivers team based on their pilot work which indicates that the shallow water, low boat traffic, low river flow, ease of access by kayak, and ease of viewing from the cement riverfront walkway make it the optimal location.

“The location of our install was chosen largely because it’s the most convenient spot,” explains Phil Nicodemus, who serves as both the director of research for Urban Rivers, as well as the Nature Outpost Stewardship Coordinator for the Shedd Aquarium. “We already had worked at this spot, so there’s a research foundation there, and it was easy to establish relationships with the businesses on the river there. There’s no commercial traffic allowed, it doesn’t seem to ever freeze over in the winter, and it’s a relatively calm area of the river, all of which make it easier to study which of our plants are best suited for these wetlands, and which species will need more protection if we’re going to keep up the diversity.”

As of July 2018, Urban Rivers and Shedd Aquarium had teamed up to place a new 260-square-foot floating garden of native plants in addition to the existing 1,500-square-foot island. This new river island will be home to species such as Dudley’s rush, marsh marigold, queen-of-the-prairie, and swamp rose mallow. These plants are in turn drawing more insects and other animals back to the river. 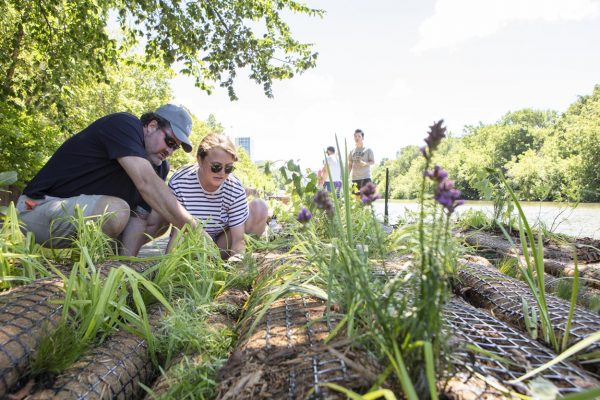 Each species of plant was carefully chosen for the island. (Credit: ©Shedd Aquarium/Brenna Hernandez, via communication)

The floating island modules are constructed of coconut coir, an inert growing medium made of coconut husks. Tubes of rolled coconut coir are lashed together on a stainless steel frame and connected to wooden pallets that are stuffed with leaves and submerged. This element of the island draws invertebrates, minnows, and tadpoles to the wild mile.

“We choose the plants under the guidance of our botanist, Peter Nagle, who works at the botanic garden managing many of the same species we’re using,” details Nicodemus. “Since this is such a novel growing platform, a lot of what we’re doing right now is just trial and error. For instance, in our first install we tried out a forb called ‘rattlesnake master’ which should be able to handle a reasonable amount of moisture from terrestrial experience, but it didn’t survive past the first year. We want to maximize the diversity of species, but in the long run we’re going to want to select for the species that give us the most ecological bang for our buck, and pick plants that are going to be able to thrive long-term—meaning 20+ years—on the islands, while still keeping diversity high.”

To round out the modules, the teams add waterfowl boxes and turtle logs, and the entire setup is monitored by an underwater camera on a live feed. The islands are already attracting monarch butterflies and black-crowned night herons. Common carp—an invasive yet very hardy species—are using the water underneath and around the islands as a mating ground.

“In very healthy, high-quality ecosystems the invasive Common carp can certainly be a big problem, especially uprooting aquatic vegetation and stirring up mud from the bottom while they are pursuing their invertebrate foods,” remarks Dr. Casper. “However, the Chicago River ecosystem is not high-quality yet. It is highly modified with concrete lining the shore,  loose muddy bottoms, and a real lack of naturally varying river flows. Water quality is way better than it used to be, but big storms can still really muddy the waters too.”

Adult Common carp are very tough fish, and they generally tolerate all of the problems the Chicago River presents well—that, Dr. Casper points out, is why they are such a successful invader. However, their young are still just as vulnerable as native fish. 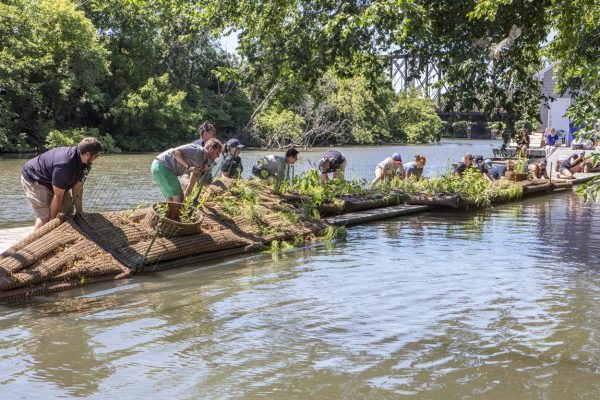 The team prepares to put the island to work in the river. (Credit: ©Shedd Aquarium/Brenna Hernandez, via communication)

“The fact that we have been seeing them spawning in and around the habitat modules in the spring is a sign that the tolerant fish can make it,” adds Dr. Casper. “That is welcome news that leads us to think that if we install more high-quality habitat, like the Shedd’s River Island, that we might actually be able to have more Bass, Bluegill, and the minnows and chubs they feed on, too.”

Next, the Shedd and Urban Rivers teams will be adding humans back into the mix in the form of kayaking citizen scientists. Of course, researchers from both teams will monitor how the islands are doing, and analyze how they are impacting water quality. Eventually, so will citizen scientists participating in the Kayak for Conservation program. Volunteers will kayak around the islands, observe, and tally the number and variety of species, both animal and plant, that are on and near the modules.

“We’re tapping into a lot of citizen science networks so that we can compare our islands to terrestrial settings,” states Nicodemus. “For instance, we will be using the National Phenology Network‘s system to compare our plants in terms of seasonal stages to the rest of the country, to make sure our plants have the right timing and we aren’t missing out on some key seasonal shifts that might harm their appeal to birds or pollinators. We will also have volunteers count pollinators and length of time they visit the islands.”

This will complement Nicodemus’s ongoing research, as well as the fish surveys and macroinvertebrate sampling being conducted by the MWRD.

“I will be using periphyton sampling plates to measure changes in chlorophyll a and algal diversity, as well as using 96 well ecoplates to measure microbial functional diversity,” adds Nicodemus. “Combined, these projects should give us a good idea of what these indicators were like before we installed any islands, and after we installed our first 1,500 square feet of islands, and will capture how much more we are changing the ecological situation in the canal as we expand out, with the ultimate goal of being able to precisely define the benefits of these native planted floating wetlands to the local wildlife.”