Citizen Scientists, Researchers Band Together to Save Buzzards Bay 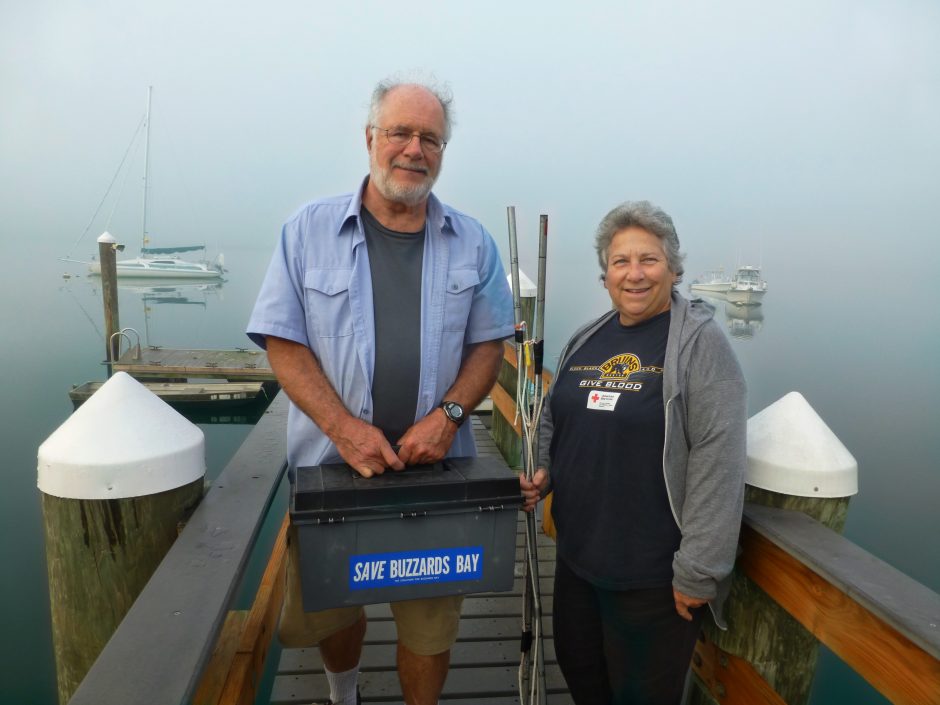 When she saw an ad in her local paper 20 years ago, Paula Boutin was immediately intrigued. “They were asking for citizen scientists to volunteer and help gather information to save Buzzards Bay,” she says. “I signed up. I’ve always thought of myself as an environmentalist.” As a resident of a waterfront home in Wareham, MA, Paula was happy to pitch in and help protect the Bay, not only for herself but for her neighbors and the wildlife living there, too. Four years later, her husband Len joined her. Today, Paula has been volunteering to save Buzzards Bay every year for 20 years, Len for 16.

Using sampling poles made by Horacio’s in New Bedford and gradated by Tony Williams, Director of Monitoring Programs for Buzzards Bay Coalition, along with toolboxes provided by the Coalition, Paula, Len and other citizen scientists of diverse ages and backgrounds come together each year from May to September in Buzzards Bay, ready to help monitor the Bay’s health and keep an eye on changes in the Bay that might be of concern. “The fact that we can notify researchers immediately if we see something out of the ordinary is one of our favorite things about the program,” says Len.

Tony Williams has organized and trained citizen scientist volunteers for many years. Volunteers are organized in May. Williams provides the volunteers with handbooks and data sheets, then assigns them sampling sites to go to for data gathering. The citizen scientists provide crucial data Buzzards Bay Coalition would not be able to collect without them. “We just wouldn’t have the staff or resources otherwise,” says Rachel Jakuba, Science Director for Buzzards Bay Coalition. “We’re grateful for their help, and they enjoy it every year. We recently had a volunteering record: 166 citizen scientists took part in data gathering. It’s been a very successful program.”

To take data, volunteers are given metal sampling poles. These poles hold two sampling bottles with rubber stoppers, which Williams assembles. The citizen scientists are instructed to drop the bottles to a certain depth in the Bay. The toolbox sampling kit has a thermometer, graduated cylinder, Secchi disk, rinse bottle, safety glasses and hydrometer. They also contain Hach dissolved oxygen chemistry test kits. Instructions in the handbook are provided for all testing procedures, including calculating salinity and determining dissolved oxygen using the Hach kit. The Secchi disks are used to monitor water clarity. Handbooks also explain the importance of checking for weather and tides using a Beaufort scale, which expresses how windy and wavy it is.

While the Buzzards Bay Coalition citizen science data gathering methods have been mentioned in a previous Environmental Monitor article, there have been a few changes since 2016: thermometers now are FisherBrand and have digital readouts accurate to one decimal place. Previous thermometers had tick marks and were only accurate to the degree. Another change is that a neighborhood pond, Quicksand Pond, was added to the study. “Because we added Quicksand Pond, we also gained 15 more citizen scientists who lived in the area and wanted to participate,” says Jakuba. Water samples are taken about every five days during the May to September sampling periods. For two days in July and August water samples are collected to be tested for nutrients and delivered to a partner lab at the Marine Biological Laboratory. For those samplings, volunteers get additional bottles, ice packs to keep the samples preserved, syringes and a filtering apparatus for filtering for particulates.

In training sessions at the beginning of each season, volunteers get pre-printed data sheets which they submit each week with their testing results. Tony, Rachel and an assistant do all the water quality assessment and data analysis using the information they get from volunteer data sheets.

Citizen scientists provide weekly information on Buzzards Bay temperature, salinity, dissolved oxygen and water clarity. During July and August, they provide information on Bay nutrients including nitrogen, phosphorus and chlorophyll. The Ecosystems Center at the Marine Biological Laboratory (MBL) in Woods Hole does the analytical work for the nutrient samples. Rich McHorney and Lindsay Scott at the MBL perform nitrogen, phosphorus and chlorophyll analysis and MBL Fellow and Woods Hole Research Center Senior Scientist Christopher Neill oversees the program and provides technical support to the program.

Volunteers are told upfront about the time commitment involved in sampling: the volunteer needs to commit to sampling for the entire collection period. About an hour of sampling is required per day. “The time commitment is not an issue for most people. They don’t mind and are happy to do it,” Williams says. “We get people from all kinds of backgrounds. Many are non-scientists but we get scientists too. Sometimes we even get whole families. Usually our volunteers are high school age or older. We take people of all educational levels. The program is really quite user friendly. I’m the one who typically does the volunteer coaching. Some need a little more encouragement than others, but in the end most jump on board and collect data for the whole duration.”

Among the few requirements for citizen volunteers are they must be vigilant when using equipment and they must be able to stand or work on the dock, pier or bridge to take samples. Some volunteers go out in boats to sample. Nutrient samples, for example, are typically taken using boats. Volunteers keep the sampling equipment with them, but hand over physical samples for nutrient analysis.

Buzzards Bay Coalition continues to monitor the health of the Bay and reach out to the surrounding community through its Baywatchers citizen scientist program. Word about the program is spread through a Buzzards Bay Coalition newsletter and a website, www.savebuzzardsbay.org Letters are sent to previous volunteers to encourage them to stay involved. “Volunteers also recruit more volunteers,” says Williams. The Buzzards Bay Coalition, a non-profit organization, operates the Baywatchers citizens’ monitoring program under the auspices of a quality assurance project plan approved by the EPA and the Commonwealth of Massachusetts. This plan is reapproved every five years.

Citizen scientists Paula and Len Boutin plan on continuing to volunteer for many years to come. “Working in this program has been a pleasure,” says Paula. “We have watched the Bay improve over time because the people who live here have developed a greater appreciation for it and have worked to protect it. There’s less trash in the Bay now that people have really been taught over the years to take care of it, and not take it for granted.”

“Once one of them dropped a scallop on our lawn,” Paula laughs. “That was a surprise! We didn’t use to see things like that. But it tells us the birds of prey are doing well.”

Being a citizen scientist at Buzzards Bay has led to other surprises, too.

“Once we saw a pipefish…we think it came from the Gulf Stream. Sometimes creatures get lost. It was very pretty,” says Len. “If we lived somewhere else, we never would have seen something like that. The Bay is a unique place.”

“We love it here,” says Paula. “We try to recruit more citizen scientists whenever we can. We want people to respect the Bay! If everyone does that, the Bay will be here for people to enjoy forever.”