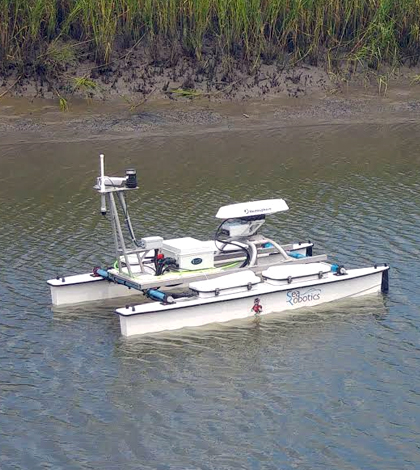 For centuries, coastal marshes have been steady storehouses of organic matter and the carbon it holds. But predicted shifts in sea levels and rising global temperatures signal a change is on the way.

“With sea level rise, the loss of marsh is meaning the loss of carbon,” said Chris Osburn, associate professor of Marine, Earth and Atmospheric sciences at North Carolina State University. “That carbon is on the verge of being released.”

Osburn and others at the university, in partnership with the Bald Head Island Conservancy, are working to understand what such a shift will mean. In a work that’s just begun, they are using an unmanned surface vehicle (USV) equipped with side-scan and swath sonar, a fluorometer and a water quality sonde to document carbon dynamics in Bald Head Creek. The idea is to take findings and use them to develop a model of coastal marsh carbon flux that can be used for management and research in similar areas around the country.

The creek sits on Bald Head Island and is hemmed in by the Cape Fear River and the Atlantic Ocean. For the investigation, which is serving as a thesis project for master’s student Cindy Lebrasse in Osburn’s lab, Bald Head Creek is serving as a launch point.

“We’re collecting the measurements we need to develop a coupled biogeochemical model of the system,” said Osburn. “… For Bald Head Creek, that’s one of our reference sites. It’s the place where we’re starting this work. Once we have the techniques down and a model of the system, we plan to apply it elsewhere.”

A lot of data will need to be collected to get to that point, which is where all the tech comes in. The sonar on the USV capture the bathymetry of the creek along its side and bottom while the water quality sonde snags measurements of temperature, conductivity and dissolved oxygen. Data on colored dissolved organic matter (CDOM) and chlorophyll a are recorded by the fluorometer. A GPS unit is also onboard to help manage the USV’s movements. It’s possible to program the craft to sample along certain lines based on location data. But that option isn’t used much in Bald Head Creek because it’s a small and somewhat crowded waterway.

“There’s a camera on it so it can be piloted with a forward-looking view,” said Osburn, discussing a recent sampling trip. “We were in a boat that served as a chase boat that helped us keep people away from it. There’s lots of interested kayakers and paddleboaters around.”

For future study sites, the unmanned surface vehicle’s routine may be tweaked to best fit the water body it’s sampling. One that may be visited is Barataria Bay, along Louisiana’s Gulf Coast. It is a much more dynamic area than Bald Head Creek and could yield some interesting comparisons.

Investigators are keen to learn about a number of issues at play between the two marshes as well as others they plan to visit in the future.

“One thing is that the form of organic matter is an important influence on its reactivity. Dissolved organic matter has a wide range of sources and activities. How easy does it turn back to carbon dioxide?” said Osburn. “One thing we’ll be doing is tracking how reactive carbon moves into and out of these systems and how that varies with different parameters.”

A hope for the work is to figure out a range for that reactivity. Another issue, Osburn says, is that the flux into and out of adjacent marshes is very poorly understood. He is looking to gather enough data to inform a model that can constrain a better range than other methods.

“One of the questions we’ve been trying to understand is coastal marshes — do they store or expel organic matter?” said Osburn. More uncertainty is introduced by the sheer amount of carbon that can be exported from coastal marshes each year, anywhere from 15 to 330 grams per meter squared.

“In terms of the export of dissolved organic carbon, that’s a 20-fold range,” said Osburn. “Understanding what influences that range is something that we need to do.”

At this stage, scientists are mostly still gathering data. But Lebrasse is planning to present some early findings at the next meeting of the American Geophysical Union. And Osburn says efforts to get the USV sensor package into other coastal marshes are ramping up.

“Our plan is to use it around the Gulf of Mexico in a variety of coastal environments. We want to use this technique to quantify carbon moving out of coastal estuaries across gradients of the environment in which sea level rise might be higher or lower,” said Osburn. “We also have an ADCP (acoustic doppler current profiler) we intend to deploy to help with water flow, current velocity and direction (data).”

Funding for purchasing the unmanned surface vehicle was provided by the National Science Foundation through a grant to NC State’s Center for Marine Sciences and Technology (CMAST). Additional support comes from the North Carolina Sea Grant and an innovation grant from North Carolina State University in partnership with Bald Head Island Conservancy. All data gathered in the effort will be shared with officials at the conservancy for use in advocating for the conservation of coastal estuaries and saltwater marshes. Del Bohnenstiehl, an associate professor in Osburn’s department, is also assisting in the work.