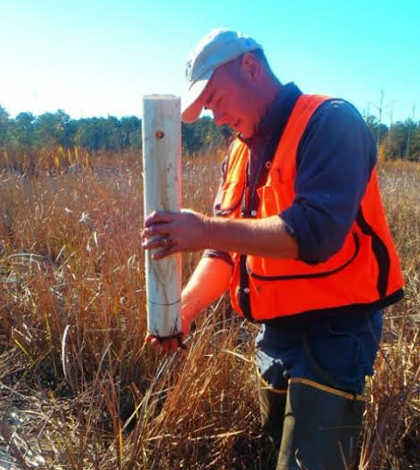 In dissecting the effects that rising sea levels could have in a climate change future, scientists are coming at the issue a lot of different ways and with varying questions in mind. For some, the focus is on melting ice caps, while others are zeroing in on forecasting which areas could suffer most. But for researchers studying along the South Carolina coast near Georgetown from 2011 to 2012, the issue was far more unseen: the effects of salinity increase (think seawater) on plant productivity.

The effort was led by scientists at Auburn University, but involved others from the U.S. Geological Survey, Clemson University and Bloomsburg University. Work focused on three tidal forest sites along the Waccamaw and Sampit Rivers. These were dominated by baldcypress trees and one marsh that had salinity concentrations near or just above 0.5 parts per trillion. Over the study period, researchers documented how the forested wetlands were changing in response to rising sea levels and increasing salinity.

“We were also looking for indications of how allocation of plant production changed as tidal forests became stressed and ultimately were replaced by more salt-tolerant marsh species,” said Matt Ricker, assistant professor of soil science at Bloomsburg University. “This information could help make predictions as to what the impacts of rising sea levels and increased saltwater intrusion will be on tidal river wetland ecology in the future.”

Fairly standard sampling equipment was used in the effort, with scientists relying on gear like raised wooden litter traps to collect leaf litter and diameter-at-breast-height tapes to estimate the net primary productivity above ground. They also used 8 centimeter-diameter PVC tubes to gather root samples from the top layers of soil. Ricker says these cores were taken every six weeks over the course of the two-year study, allowing scientists to accurately estimate annual root production. Going into the work, the expectation was that they would find decreasing overall plant productivity as salinity levels went up. Along with those higher levels, scientists also expected that plant stress and mortality would go up in the wetlands.

And that is, partially, what the researchers found.

“The major results from this multi-year study were that as salinity increased, woody overstory trees produced less annual biomass, both in the form of leaf litter and stem wood,” said Ricker. “As this occurred, the canopy of the tidal forests became more open and greater herbaceous understory biomass was measured.”

Ricker adds that increases in salinity, once they breached 3 parts per trillion, brought about losses in tidal forests and gains in salty marsh ecosystems. They also found that herbaceous marsh systems, though they had no woody biomass, had greater below-ground root production than any of the tidal forest ecosystems under study.

The results, he says, show that the stands of baldcypress trees along the Waccamaw River saw decreased growth potential because of intruding saltwater. And more broadly, the data collected suggest that changes in tidal river hydrology, due to rising sea levels and predicted climate changes to come, will be incredibly important in forecasting changes in store for tidal forested wetlands.

“River salinification is a major concern for coastal water resource managers, who have already begun to explore the possible impacts of climate change on municipal freshwater river intakes,” said Ricker. Existing models accounting for lower freshwater inputs with higher seas show that higher river salinity will likely impact supplies of freshwater, he adds. “These existing hydrologic models are flexible, and with the addition of region-specific climate projections and baseline tidal forest productivity data provided by our study, could be useful for wetland managers looking to predict changes in tidal forest structure, biogeochemical functions and wildlife habitat value in response to increasing salinity.”