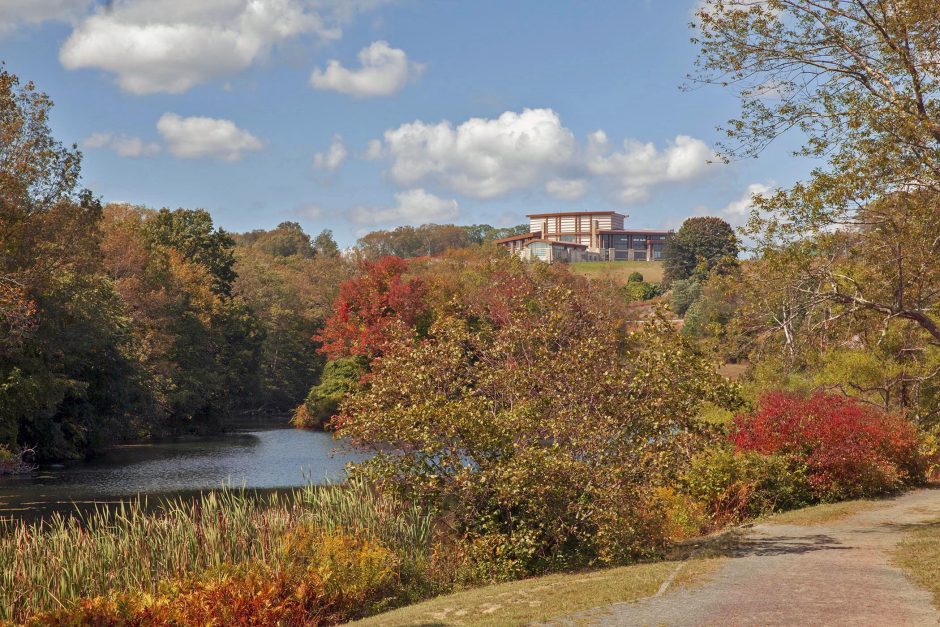 Around 2190 in number, the Mohegan Tribe, or “Wolf People,” occupy a reservation in the eastern upper Thames (River) Valley in Connecticut. Federally recognized in 1994, they are celebrating the 25th anniversary of that milestone this year.

The Mohegans are known for their deep knowledge of Native plant remedies, such as using silver maple bark infusion for cough medicine. The late Mohegan Medicine Woman, Gladys Tantaquidgeon, recorded her people’s ancient plant knowledge and was instrumental in preserving historical records for the tribe. While rich in ancient knowledge, the tribe has also embraced the modern world. The Mohegans are no stranger to industrial pressures.

“The railroad tracks separate reservation property from the Thames River,” says Jean McInnis, Environmental Protection Administrator for the Mohegan Tribe. “There was an off-reservation auto body/vehicle maintenance facility for many years, and there are three popular casinos all under one roof at Mohegan Sun: the casinos of the earth, sky and wind.”

Having a population of 2194, plus large numbers of casino visitors (up to 1 million per month) could prove problematic for wildlife, plants and water within the reservation without a good management plan to handle that human impact. 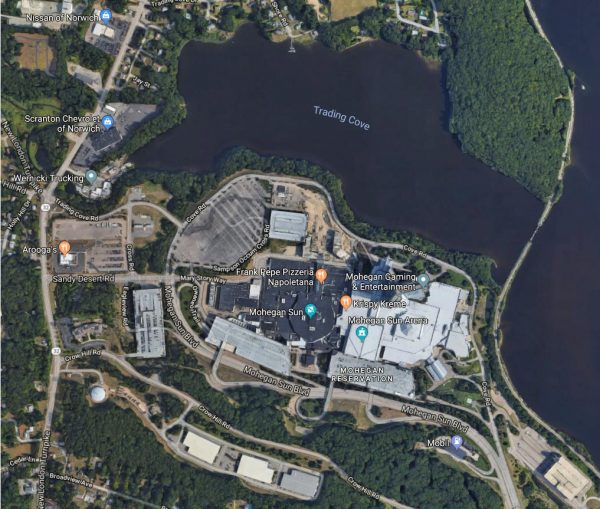 “We do responsible environmental monitoring and we recycle a lot of Connecticut mandatory recyclables, construction debris, yellow fry oil, gray grease from wastewater, universal waste and scrap food materials,” says McInnis. “That being said, there are industrial influences here (U.S. Naval Submarine Base, Covanta Southeastern CT, Montville Power, General Dynamics, Pfizer, and the Airport) which may have led to the Thames River being considered ‘impaired’ by the Connecticut Department of Energy and Environmental Protection (CTDEEP).  The water tends to be somewhat lower in dissolved oxygen than it should be.  This may be attributed to industrial runoff.”

After the first Storm Water Pollution Prevention Plan (SWPPP) was written for the Fleet vehicle maintenance facility in Norwich, McInnis collected the samples for laboratory analysis.  However, after averages were calculated for four consecutive sampling years, the Transportation Department was granted an exemption from having to perform all testing parameters and now, only samples for two types of bacteria. Chemical analysis performed on stormwater detects fecal coliform and E. coli.  “Our water monitoring work was contracted to an outside lab, but, subsequently the vehicle maintenance facility closed at the end of 2018,” says McInnis. The Transportation Department decided to lease the majority of the vehicles instead of buying them, so the maintenance facility in Norwich was no longer needed as the maintenance is included with the lease of the vehicle.

Tribal water quality, environmental protection and safety standards are the same or more stringent as those of CTDEEP and the U.S. EPA. The tribe adopted DEEP and U.S. EPA environmental regulations in 2007. EPA and federal agents have legal jurisdiction for enforcement at the reservation, but state officials do not have any enforcement jurisdiction. 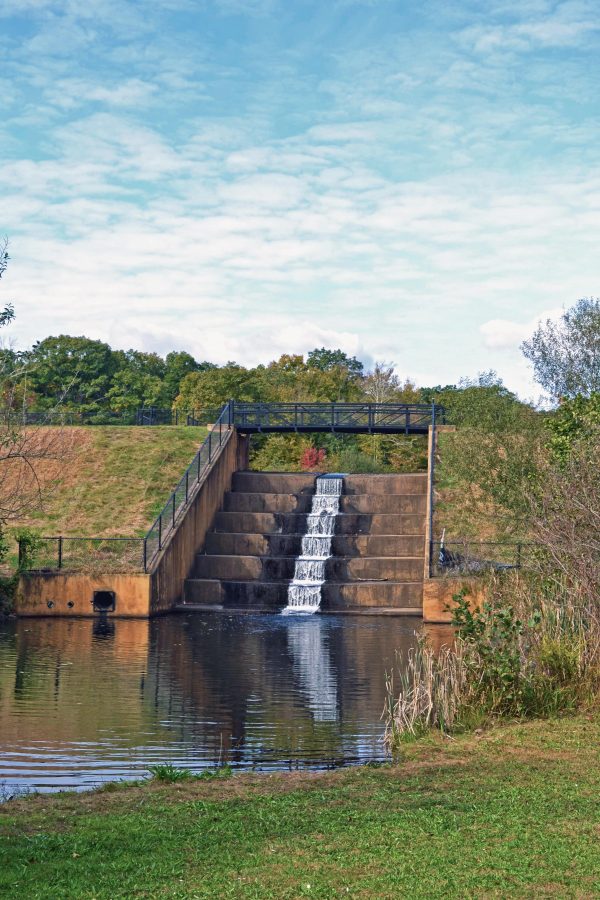 One of the tribal areas, Ft. Shantok. (Credit: The Mohegan Tribe)

“The tribe has some interesting developments on the reservation,” says McInnis. “We have a new expo center and a new earth tower, in addition to a Mohegan Tribal Cultural Historic Preservation Center that is being completed right now.”

New centers mean more visitors. While good for the reservation’s culture and outreach, more visitors mean more strain on the land. “We monitor for erosion and sedimentation control in concert with the construction permits,” McInnis explains. “We also have federal approval for our air emissions program which monitors nitrogen oxides through Treatment as a State (TAS) for our Tribal Implementation Plan (TIP) just as the State has its own State Implementation Plan (SIP). That’s something the tribe is responsible for and of which they are very proud. We don’t do continuous emissions monitoring (CEMS), however.”

The tribe does monitor tons of NOx, (nitrogen oxides) emitted from stationary sources in terms of a 12-month rolling total.  Tons of NOx per year is calculated by converting both natural gas usage in standard cubic feet (SCF) and fuel oil usage in gallons.  Also, the amount of wood and coal used in pizza ovens is figured into the equation.

The Mohegan Tribal Utility Authority monitors and meters water, sewer, electric and gas usage for the tribe and the casino and back-charges both the casino and the tribe for its services. According to McInnis, recycling is another big part of environmental management.

“We have many recycling efforts going on at the reservation,” McInnis emphasizes. Office paper, mixed paper, cardboard, scrap metal and construction debris are some of the many materials currently recycled. They have been recycled for years. There are also waste recovery units for the fryolators. Most recently, 399 tons of gray and yellow grease was recycled. An organization called Blue Earth Compost even takes the residual oil from the bottom of the yellow grease drums after they are pumped into the 2500-gallon tanks at both earth and sky loading docks.  Batteries and electronics are recycled as well, tons of them. Scrap food is recycled, prompting the U.S. EPA to recognize Mohegan with a 2018 Certificate of Achievement in their Food Recovery Challenge. Millions of gallons of water are recycled, too, in the water features inside the casinos. 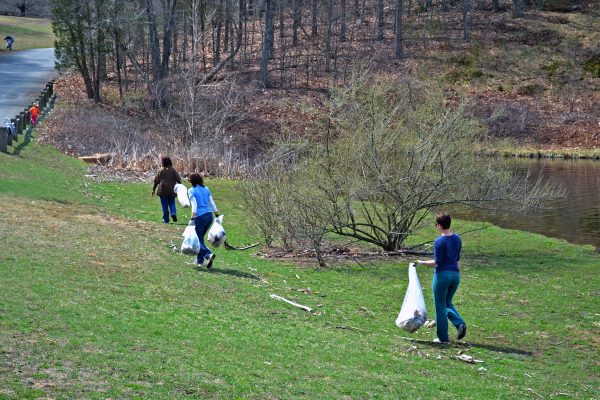 Volunteers from the Mohegan Tribe cleaning up Ft. Shantok on Earth Day in 2014. (Credit: Courtesy of Mohegan Tribal Communications)

In addition to the casinos and other businesses, there is also land on the reservation that supports wildlife, such as foxes, Canada geese and deer. Fort Shantok is one such area. Originally taken from the tribe by the state in the 1920s for use as a Connecticut State Park, it was reclaimed by the Mohegans in the 1990s and is now a National Historic Landmark. This area was once a Mohegan village, under the leadership of Chief Uncas, an important Mohegan Sachem, who protected his people from invasion by the neighboring Narragansett Tribe. The Mohegans have removed invasive plant species encroaching upon Shantok including autumn olive, honeysuckle, purple loosestrife, black locust, Norway maple and tree of heaven. Tribal members have also restored indigenous cattails and other plants.

The Mohegan Tribe also monitors greenhouse gas emissions from stationary sources of natural gas, such as boilers, emergency and business critical generators, and wood-burning ovens.  In the 2017 reporting year, there were 31,000 metric tons of CO2 equivalent emissions in carbon dioxide, methane and nitrous oxide gases. The tribe generates less than the nearby Navy Submarine Base, NRG Energy, Rand-Whitney Containerboard and Covanta in Preston. Most comparable establishments are generating more greenhouse gases than the tribe.

Even with all the efforts at curbing emissions and reducing waste through recycling, the Thames River water remains impaired.  Stormwater from all parking lots on the reservation discharge directly into stormwater retention basins and the overflow from the basins discharge into either the Thames River or Trading Cove. 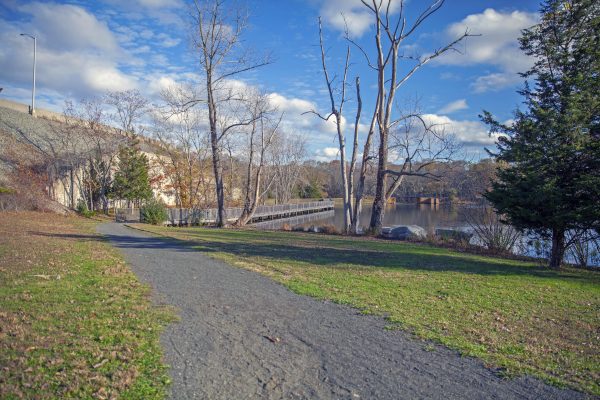 View of park at Ft. Shantok. (Credit: The Mohegan Tribe)

Other improvements have occurred on the Thames River due to cooperative efforts of the Mohegan and the U. S. Fish and Wildlife Service, as well as many other partners, and the U.S. EPA. Many years ago, a fish ladder was installed on the adjacent wetland across Route 32 which feeds Trading Cove and subsequently the Thames, which has helped increase the blueback herring, alewife and sea run brown trout fish populations.

McInnis has worked for the Mohegan tribe for over 13 years. She has developed, administered and implemented rules and regulations for tribal lands; implemented penalties in the form of fines for rule violations; and provided regulatory training programs for operations personnel in order to raise awareness in achieving compliance with state and federal regulations. She conducted 2018 semi-annual inspections, quarterly visual sample collections, submitted records for stormwater monitoring events for the vehicle maintenance and auto body shop, and submitted annual reports to the EPA and CTDEEP. Her background is in environmental engineering technologies from the University of New Haven, and environmental horticulture from the University of Connecticut.