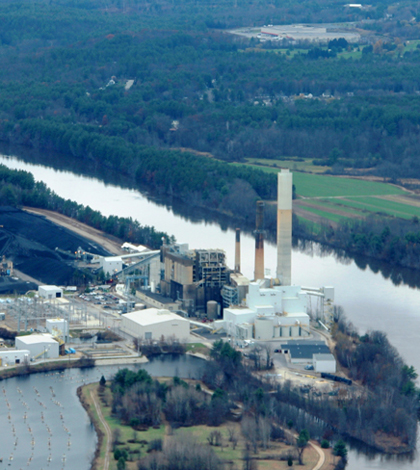 Rivers are a vital cooling source for power plants, but high-temperature water returned to rivers from the plants may detrimentally heat rivers and change aquatic ecosystems, according to a recent study.

Scientists from the University of New Hampshire and the City College of New York gathered federal data on power plants and river systems and linked up river flow and heat transfer models to figure out just how hot rivers get in the northeastern U.S.

They found that about one third of heat generated in thermoelectric power plants in the Northeast is drained into rivers via used cooling water. Just more than a third of the total heat generated at plants in the Northeast is converted directly into electricity for consumer use. Estimates were made based on a 10-year simulation using data provided by power companies and government agencies.

Study authors estimate that 11 percent of thermal pollution entering rivers from electric power plants in the Northeast exits into the atmosphere. The rest stays in the watershed eventually flowing into the ocean.

“We’re passing the buck onto the ecosystem for cooling waste heat,” said Robert Stewart, a research scientist at the UNH Earth Systems Research Center and a coauthor of the study.

The team evaluated temperature and hydrological conditions of rivers in the Northeast with several models intertwined together. One examines horizontal and vertical flows of water. The second looks at heat moving through flowing water. Another adds the effects of runoff from surface water and groundwater.

Modeling showed rivers act as a natural heat transfer systems for power plants. The water bodies bleed off heat energy into the atmosphere, or transfer it downstream, eventually to oceans.  In some areas, constant hot water from power plants means rivers operate at warmer equilibriums, never cooling down to their natural levels.

Once-through cooling plants return cooling water at elevated temperatures back into rivers after one pass through the plant. These plants are the main cause of thermal pollution in the Northeast. “The temperature that they elevate things to basically is exported through the watershed,” said Wilfred Wollheim, assistant professor at UNH and coauthor of the study.

Recirculating cooling plants, on the other hand, consume the majority of water they pull from rivers but have minimal effects on river temperatures. The plants use evaporative cooling towers where most cooling water exits. In the Northeast, recirculating plants consume about 0.4 percent of summer river flow, according to the study.

Warm rivers force many cold-water fish to move out and into smaller streams or head waters, where suitable habitats can be found.

Largemouth bass, for instance, have seen temperatures in more than 700 kilometers of rivers in the Northeast increase to unsuitable levels. The warmer rivers may also make way for invasive species native to warm water habitats and provide shelter to them during the winter.

Still, Stewart said, things could be worse. “Freshwater aquatic species are rather fortunate that humans are populated near the oceans,” Stewart said, noting that the oceans dilute a significant amount of thermal pollution from power plants on the coast.